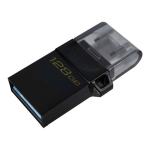 DataTraveler is designed and manufactured by one of the market leaders, Kingston, which has a long and well-deserved reputation for providing reliable storage of photos, music, videos and other digital information. The company has previously released hybrid USB storage solutions more than once, as the demand for increasing the phone’s memory capacity is always in demand. In addition, many smartphone manufacturers do not allow memory expansion using microSD cards, and this is where such hybrid solutions come to the rescue. In this review, we will get acquainted with one of the recently released models – DataTraveler microDuo 3 G2 with a capacity of 128 GB and intended for a wide range of users of tablets and mobile phones based on Android OS supporting the USB OTG (On-The-Go) function.

Little should be said about what OTG is. This technology appeared in 2006 and is translated as “On-The-Go”. It was designed so that not only computers, but also mobile phones, as well as other digital devices, could exchange files with each other using the USB port.

Since all the latest models of tablets and mobile phones support this technology, and the charging connector in most cases is a MicroUSB, it is the most rational way to connect an external drive to it. Well, if the smartphone has a different type of interface, you can always find an adapter. This is exactly what Kingston has done. The DataTraveler microDuo 3 G2 is a regular flash drive with two, but different, USB connectors. Thanks to this, this drive can be used for its intended purpose – as a device for storing data received, for example, from a mobile phone. And it is possible as some kind of transfer device due to the fact that it also has a USB type A connector. This is very convenient for the end user. The new DataTraveler microDuo 3 G2 USB drives are available in 32GB, 64GB and 128GB sizes. This should be more than enough for most users who can use this device on trips, excursions and just for video shooting at a picnic. 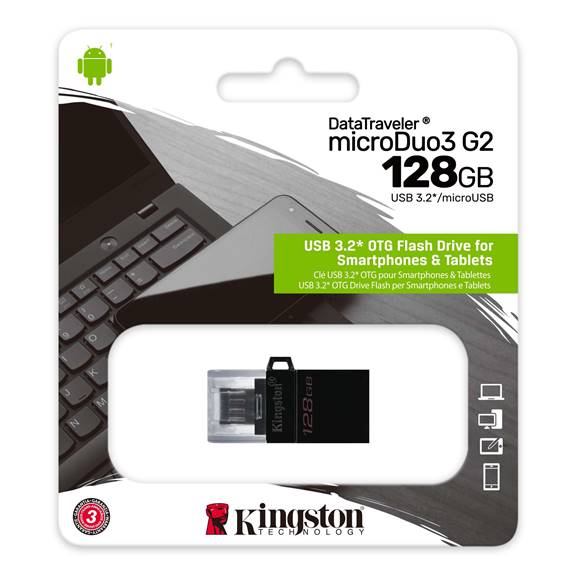 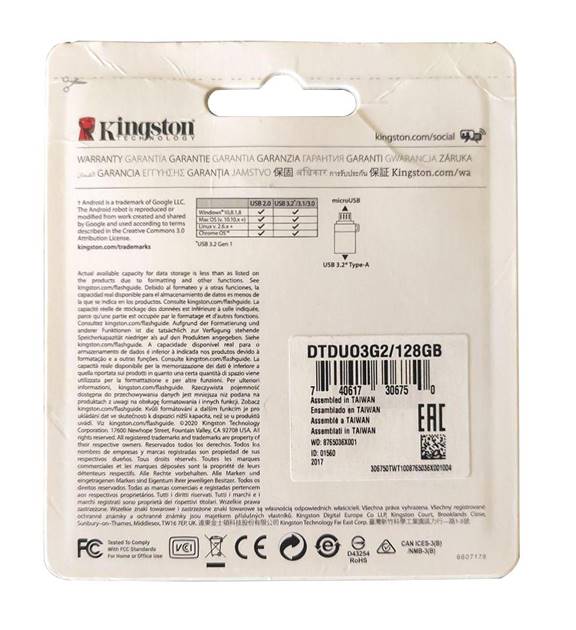 The 128GB DataTraveler microDuo 3 G2 flash drive comes in a typical Kingston blister pack. Its design is typical for the entire series. On its front side, the background is an image of a laptop and a smartphone for which this device is primarily intended. This is also confirmed by the pictograms on the right front side of the blister, as well as the inscription on the green plate indicating that this flash drive supporting the USB 3.2 Gen 1 (USB 3.0) specification and OTG technology is intended primarily for tablet computers and smartphones. 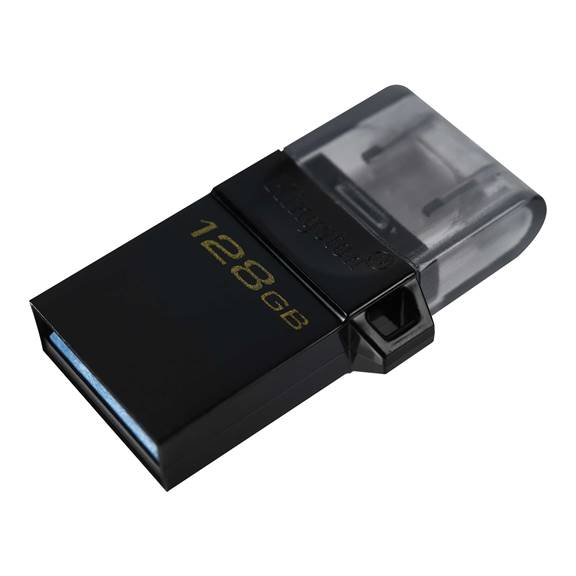 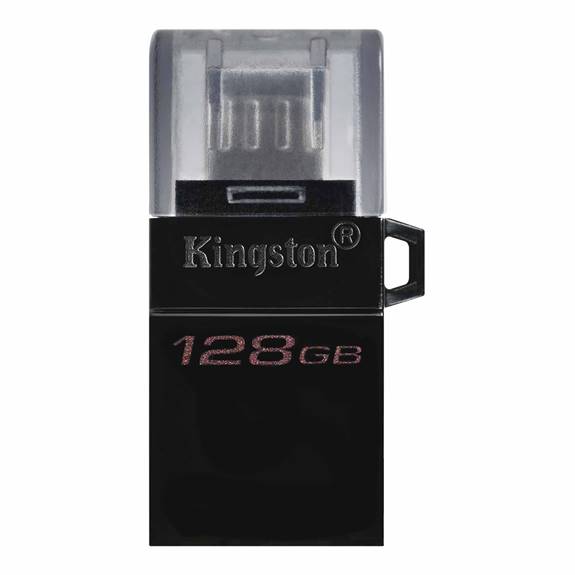 The 128GB DataTraveler microDuo 3 G2 USB stick is very small (26.9 x 14.4 x 5.4 mm) and is extremely light at around 2 grams. On the one hand, this is a big plus, but on the other hand, there is a high probability of losing it somewhere. In order to reduce this possible nuisance, Kingston made a small eyelet on the side of the case so that you can tie a strong thread and, after use, hang the flash drive on your hand, neck, belt and thereby reduce the risk of loss. A small nylon cord is supplied with the device. 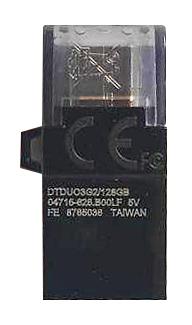 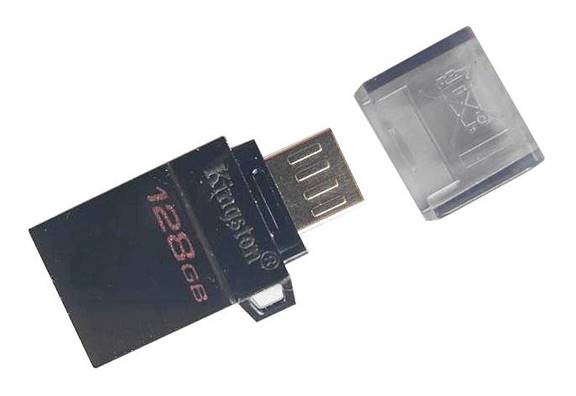 The microUSB connector is just in case covered with a protective cap from damage or clogging of contacts. The USB Type A connector is not protected.

It is worth noting that this drive is compatible not only with modern operating systems, but also works with devices based on ChromeOS, which often do not have the ability to expand memory.

If we talk about real speed indicators, then according to the crystalmark data, the read speed exceeds the declared figures and is just over 110 MB / s. While the write speed is about 20 MB / s.

The use of USB 3.1 Gen 1 allows the DataTraveler microDuo 3 G2 USB drive to deliver impressive reading speeds while maintaining easy connectivity to smartphones and tablets. In other words, Kingston has released a device that is really useful and necessary for users of mobile devices with a small amount of memory, and in some cases irreplaceable. This drive is more than suitable as an external hard drive for storing archives and transferring large files.