KYE Systems Corp. and its products, which it distributes under the Genius trademark, have been in the computer market since November 1983. A huge amount of peripheral equipment is produced under this brand, which is urgently needed by all computer users without exception, namely: computer mice, keyboards, speakers, headphones, headsets, graphic tablets and much, much more. The main feature of all its devices, without exception, is the maximum possible functionality for very little money. This opportunity is probably a consequence of the fact that the company practically does not conduct its own research work, preferring to cooperate with the leaders of computer technology – Hewlett Packard, Philips, Siemens, Microsoft. However, this did not prevent more than 100 patents from being registered in his name.

Before the upcoming New Year holidays, KYE Systems Corp. pleased all its fans with the release of a very interesting product – the Genius GX Scorpion M6-600 computer mouse, which is part of the GX series, that is, products intended for fans of computer games. 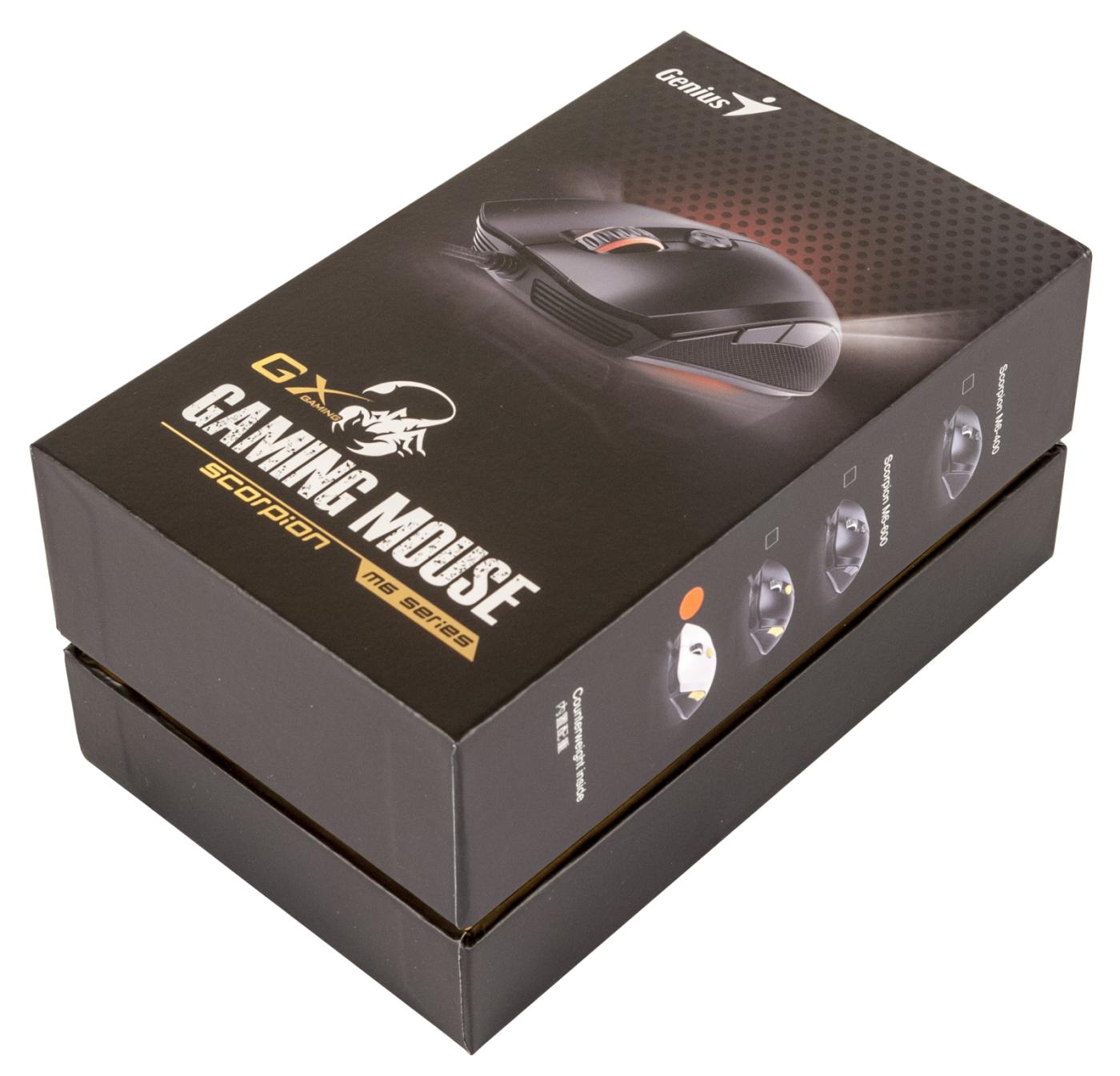 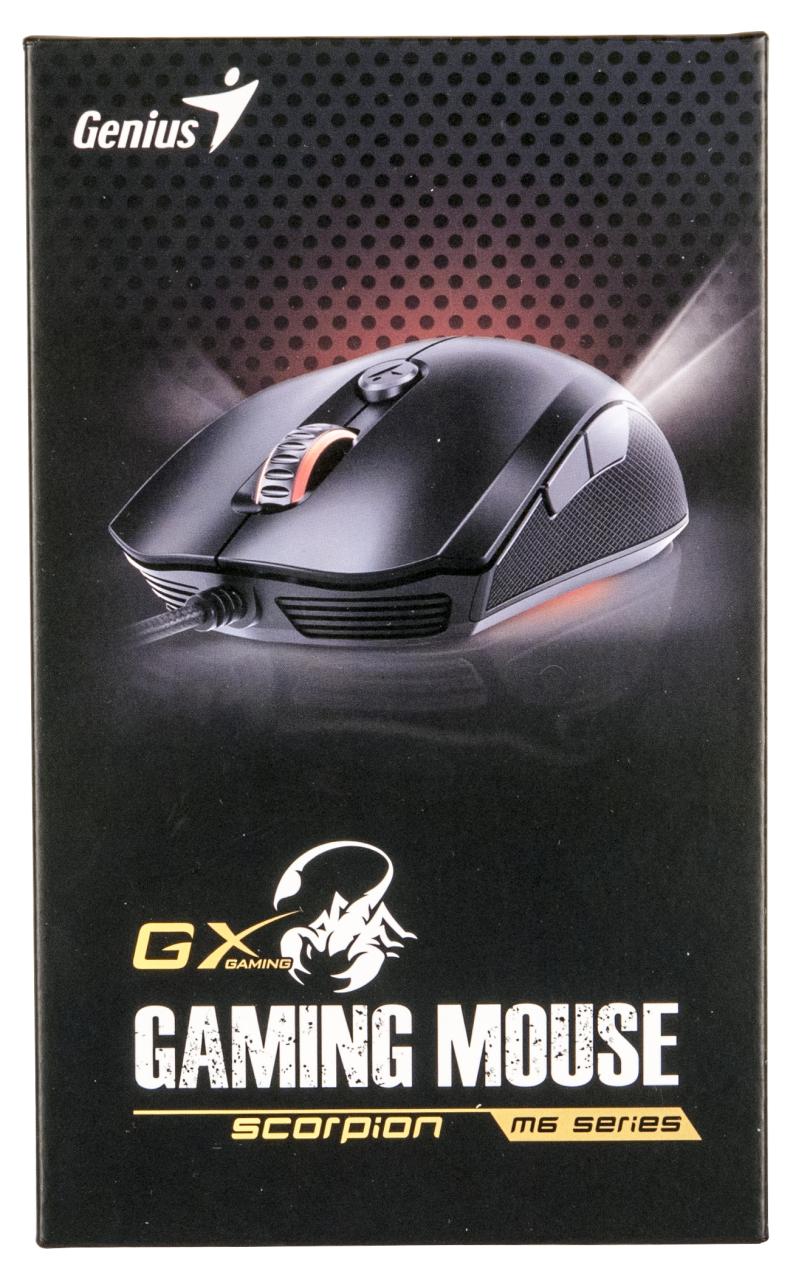 The Genius GX Scorpion M6-600 mouse comes in a very nice box made in black and white with gold plating. On the front side, in addition to the Genius trademark, stands out, splattered with splashes from killed monsters, the inscription Gaming mouse, which directly indicates the audience for which this product is intended. This is also indicated by the logo of the GX Gaming line and the name of the series – Scorpion. 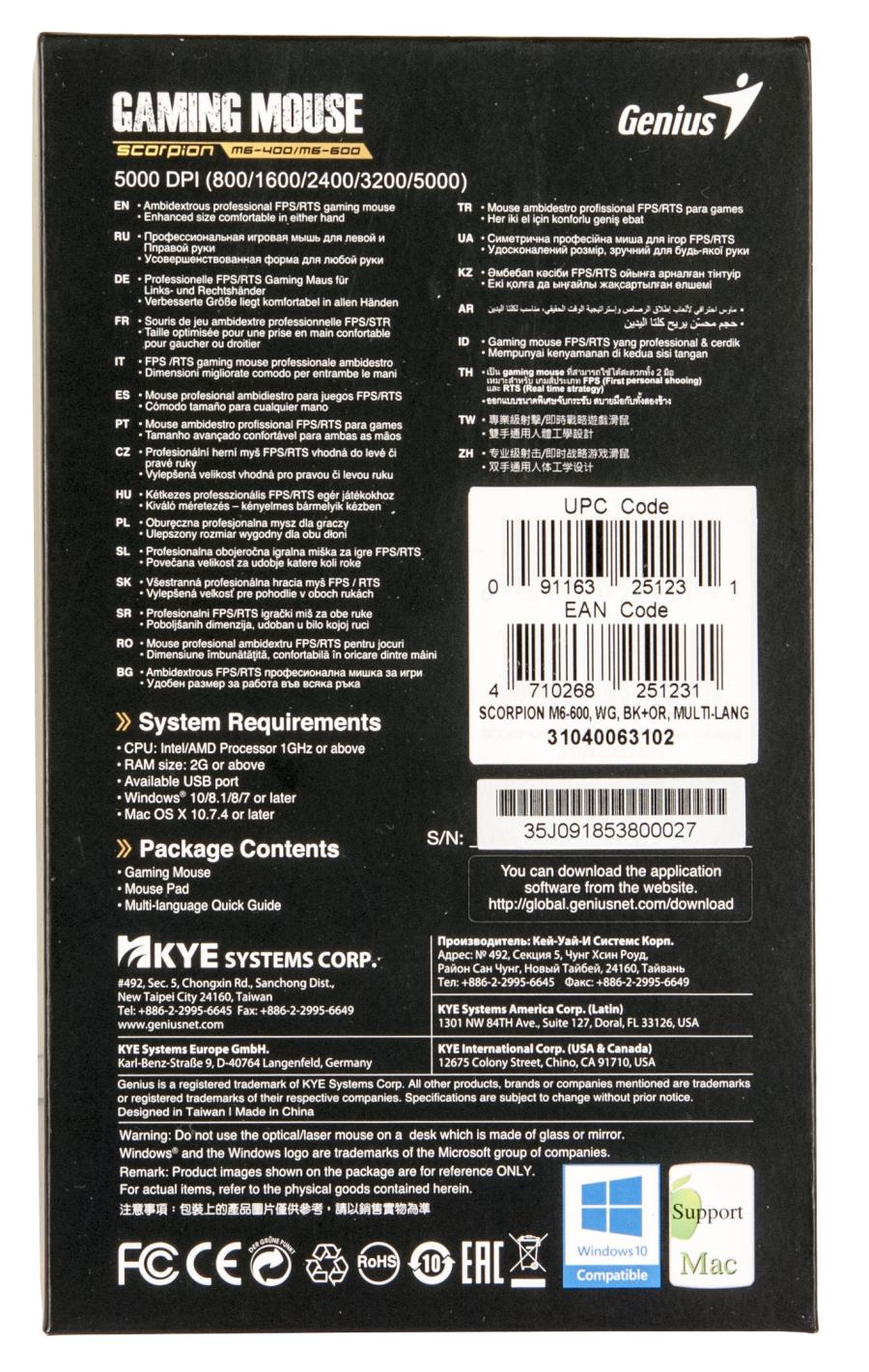 All the information necessary for making the right choice when making a purchase is shown on the reverse side. Here it is directly written in several languages ​​that the Genius GX Scorpion M6-600 computer mouse is a professional gaming mouse for left and right hands. The optical resolution that this device supports is also indicated, namely: 800, 1600, 2400, 3200 and 5000 dpi (by default, these are the parameters). In addition, it also says what is included in the package of this device and what operating systems it is supported by. 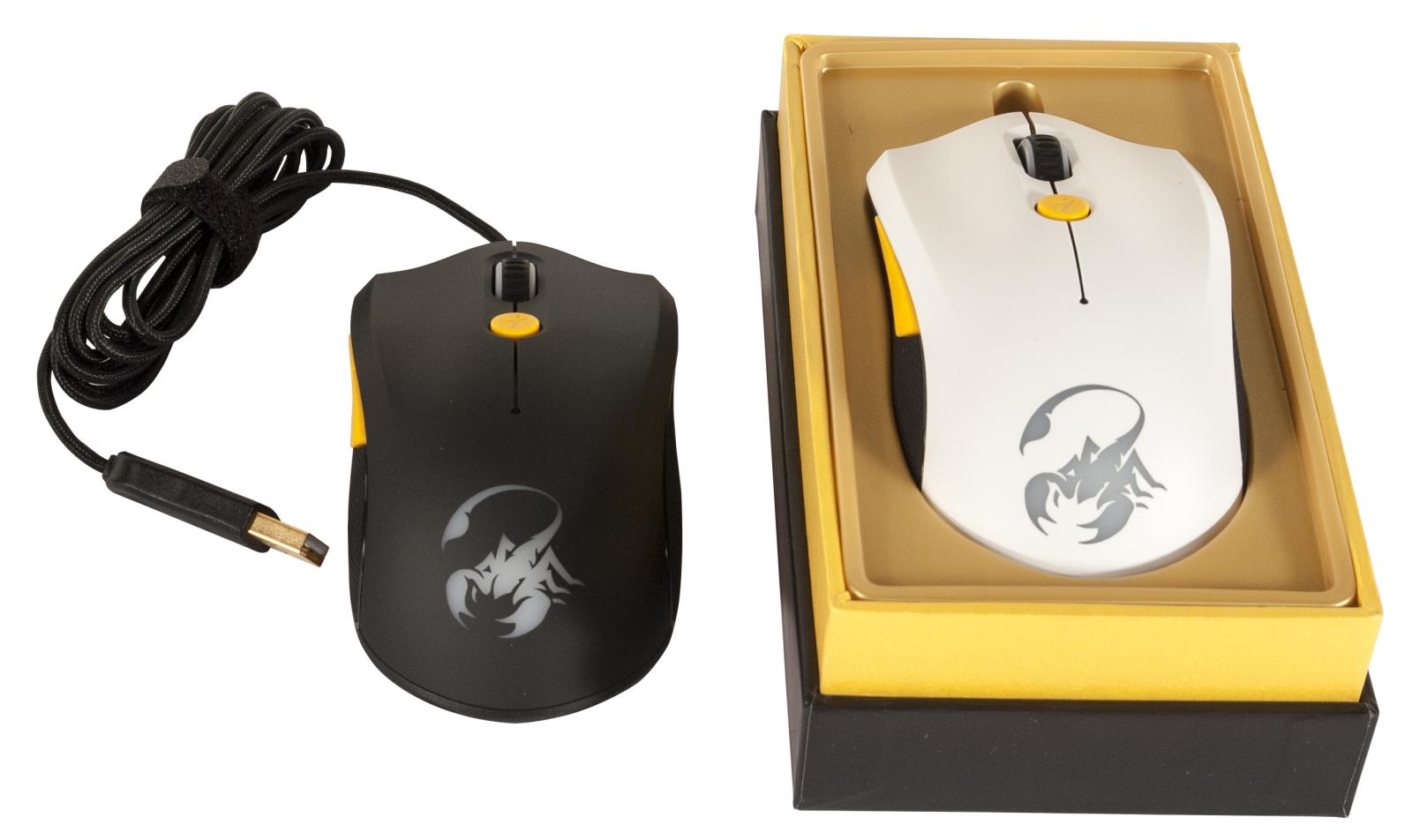 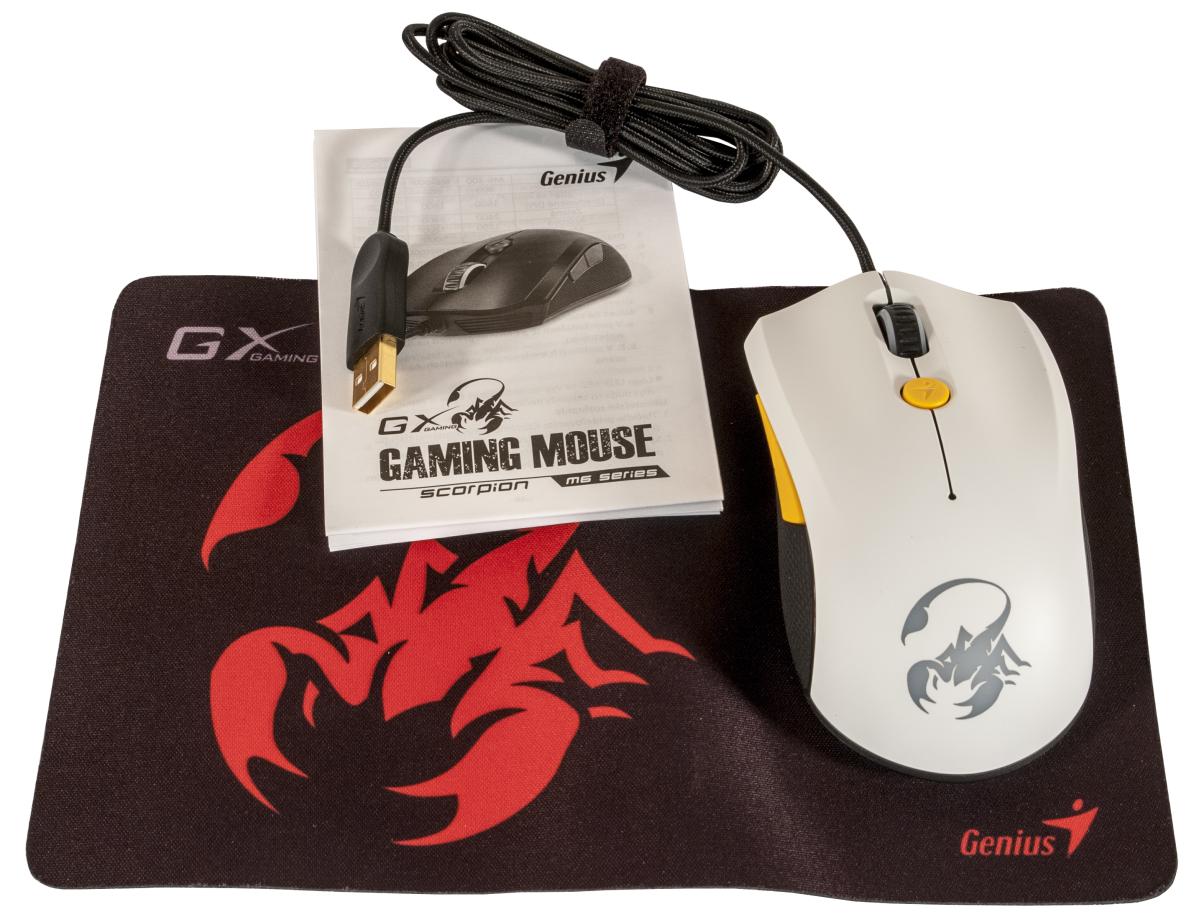 Opening this cute box, a mouse lying in yellow plastic immediately catches the eye. The choice of yellow is not accidental, since the Genius GX Scorpion M6-600 is available in three colors: completely black, black with yellow plastic inserts and white, also with yellow buttons on top (for quick step-by-step resolution switching) and two programmable buttons on the left side. This gold-plated USB mouse comes with a small mouse pad and a multi-lingual quick start guide. Since the mat with the Scorpion product series logo is still slightly larger than the box, it should be smoothed out before using it for its intended purpose. The user will also have to independently download the driver from the manufacturer’s website, if, of course, he wants to take advantage of all the advantages of the purchased product.

The technical parameters of the Genius GX Scorpion M6-600 mouse are as follows: 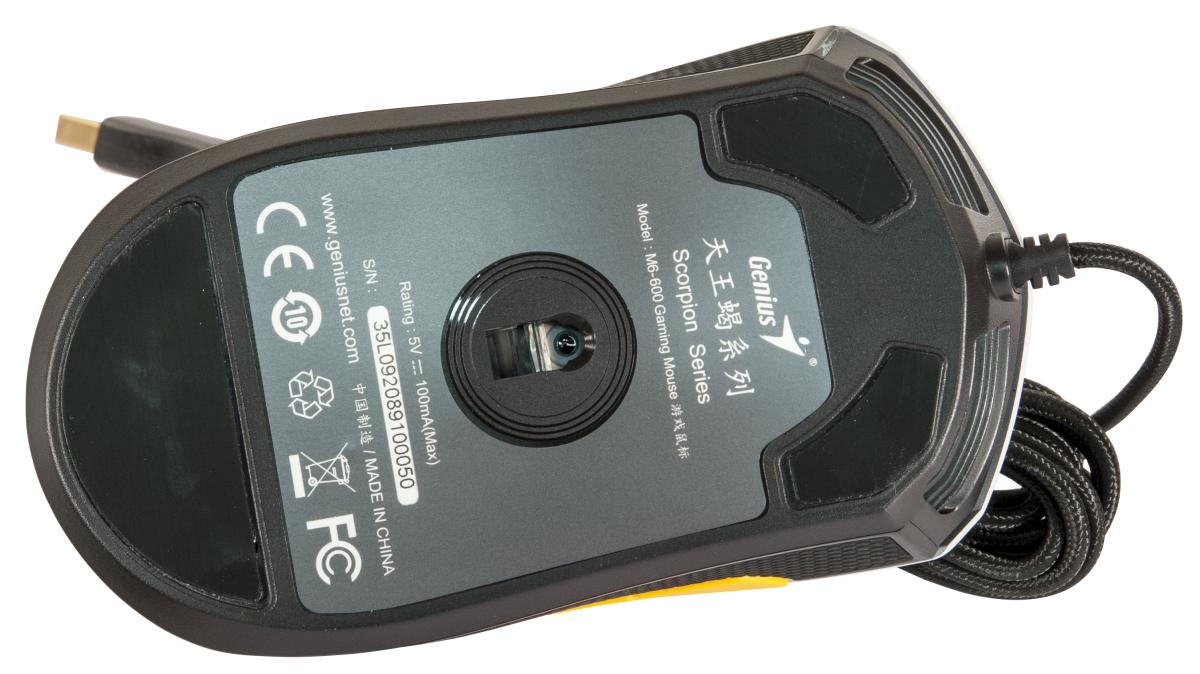 From the back of the computer mouse, you can see that the optical sensor is located strictly in the geometric center and is a kind of arch, which is divided into two parts by a small optical prism. For stability and smooth movement of the mouse on the mat, the base pads are made as large as possible in order to avoid unnecessary tilt of the structure and, consequently, the possible erroneous operation of the LED sensor. The model name, series, country of origin and the serial number of the product are also indicated here.

The shape of the Genius GX Scorpion M6-600 mouse does not differ in any originality, probably because any somewhat unusual shape requires some getting used to and does not always fit in the hand like a glove. In order to avoid this, the designers of the company did not become wise and made the mouse as familiar and symmetrical as possible, so that it was convenient to use it for both right-handers and left-handers. The cord for connecting to a computer is of a small diameter, but is made in a silk braid, and this prevents it from twisting, which is often very important. 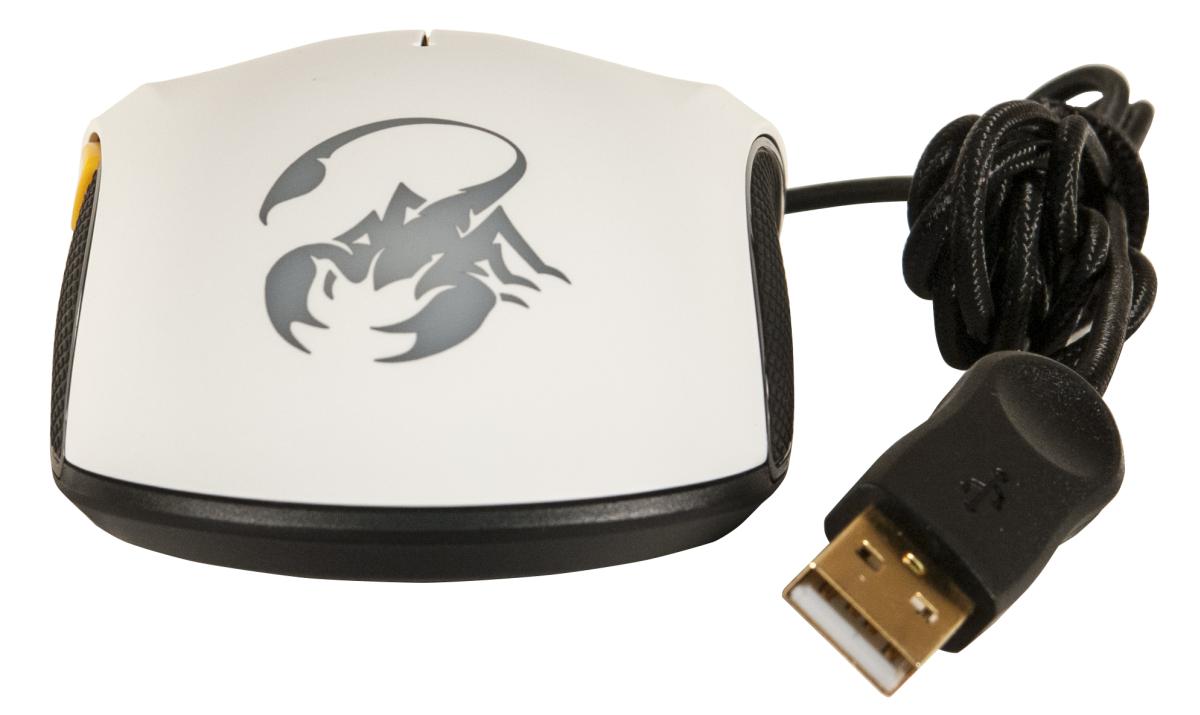 Above, on the body of the manipulator, there is a transparent, characteristic for the entire line of these products, an image from the class of arachnids – a scorpion. This image, as well as the side surface of the scroll wheel, can be highlighted and at the same time it is possible to adjust it (highlight) to suit your preferences. 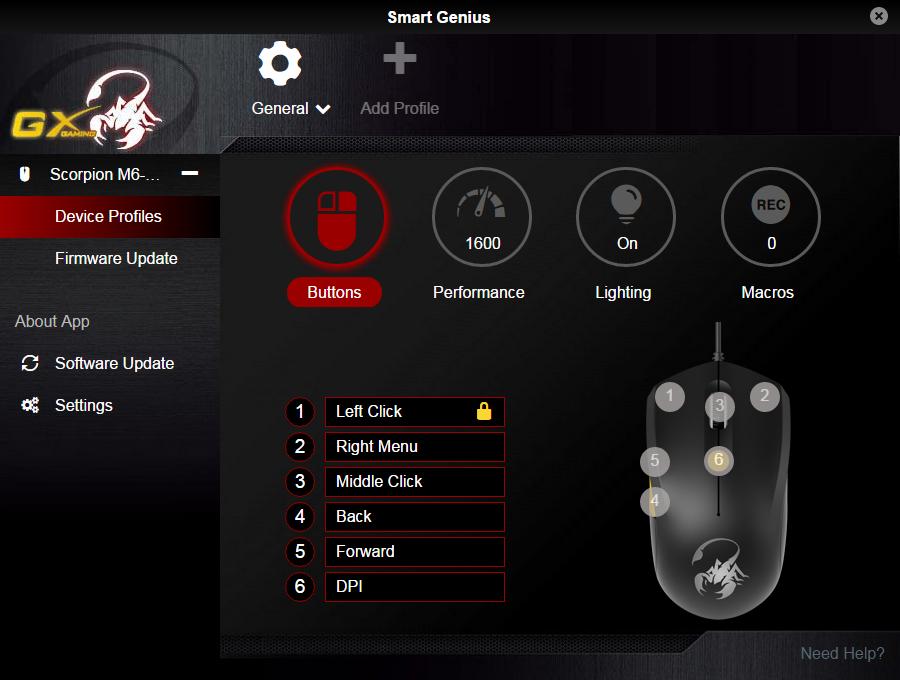 Of course, you can use the Genius GX Scorpion M6-600 mouse without downloading a specially written driver for it. And use the standard driver installed in the OS by default for this type of device. But still, it’s better to do this, that is, download and install the driver written for it. He really deserves it. On the first screen, we see that the buttons can be assigned other functions, different from those that are by default. True, this does not apply to the left, because so far this opportunity is blocked. 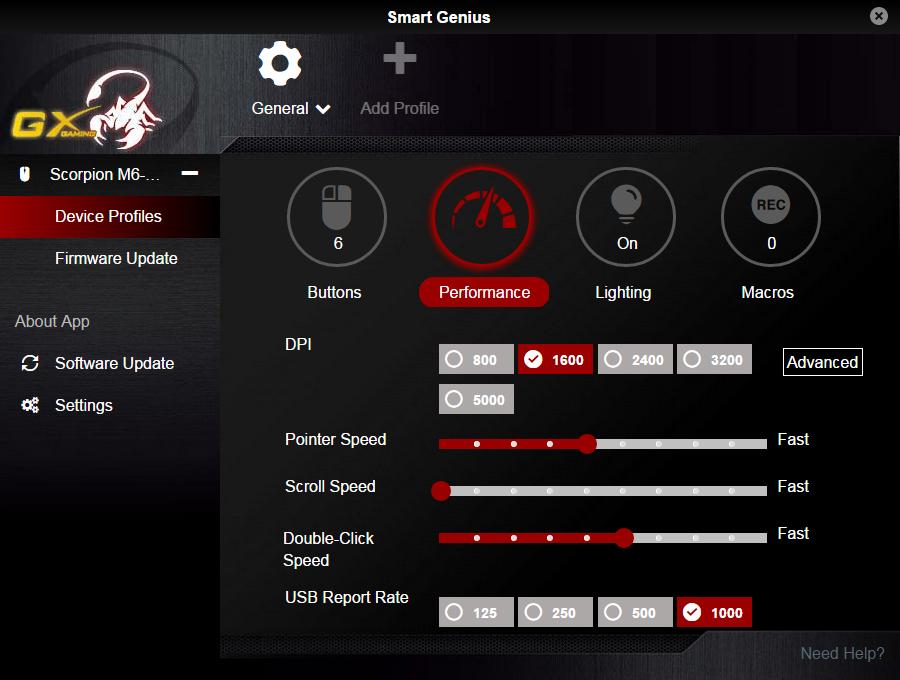 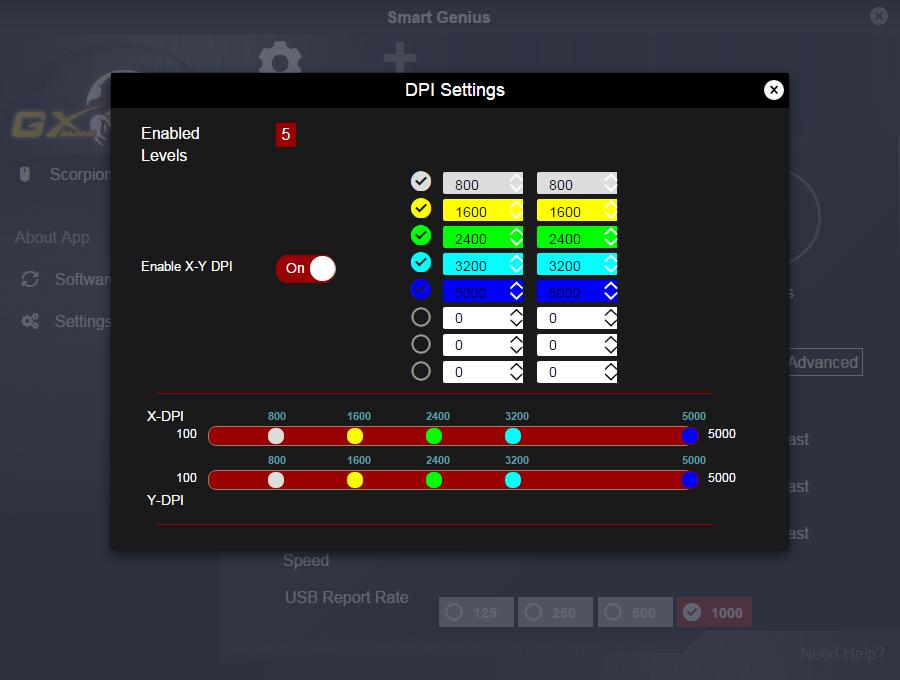 In the second tab, the user can change the speed modes (scrolling, double-clicking, and so on). Unfortunately, the fixed resolution switching parameters cannot be changed yet. Probably, this feature will appear in the next version of the driver. The manufacturing company, as you can see from the screenshot, is planning to introduce a custom resolution adjustment on both axes separately. 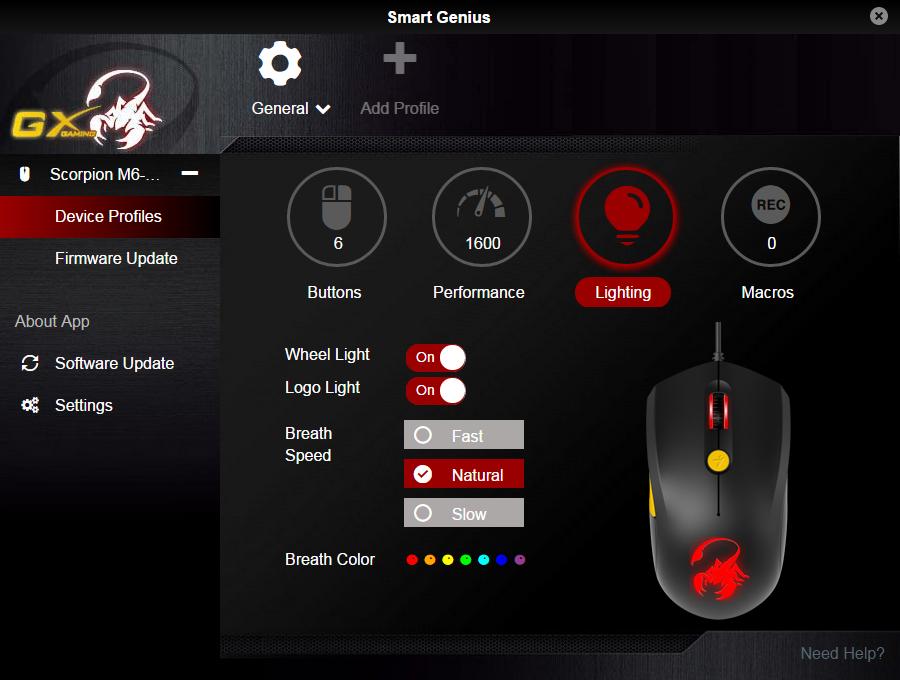 The third tab of the Genius GX Scorpion M6-600 mouse driver will allow the user to change or disable the most important thing – the backlit logo and scroll wheel. Yes, oddly enough, but this function is very much in demand by gamers, since the usual time of hot battles occurs, as a rule, at night or twilight.

And the last, fourth window is reserved for creating macros. In total, the mouse has 24 memory cells for recording macros, and several commands can be assigned sequentially to each of the buttons. In other words, an experienced gamer, owning a well-tuned mouse like this, will always be ahead of the simple amateur.

KYE Systems Corp. introducing the Genius GX Scorpion M6-600 mouse for the New Year holidays made a great gift not only to amateurs and professionals of computer battles, but to their relatives, friends and acquaintances who are looking for something to give this inveterate player. Its parameters are very good and therefore such a gift will resonate in the soul of any computer fighter. And since its price in the stores of the capital, according to the Yandex.Market aggregator at the time of this writing, is less than 3 thousand rubles, then for an ordinary, ordinary user, such a purchase will be very desirable.