Keyboards come in three main types: membrane, semi-mechanical, and mechanical. Each type has its own advantages and disadvantages. For example, membrane keypads, in comparison with other types, have very good protection against dust and moisture, and also have low noise. They are also very cheap. Unfortunately, these advantages are offset by disadvantages, to which, first of all, a short service life should be attributed. But not only these rather obvious design parameters are taken into account by the user when choosing an input device. The user also takes into account such parameters as the presence of internal illumination, the height of the keys, ease of use, and personal tactile sensations. Moreover, the last parameter is so personal that it defies any prediction. This is probably why there is a huge variety of models on the input device market, and each of them has its own buyer. This article will review the ThunderX3 TK25 model manufactured by AeroCool Advanced Technologies, which is widely recognized as the world’s leading manufacturer of cases, power supplies, accessories and peripherals for computers. ThunderX3 is a new brand of this company, which is aimed at the market not only of ordinary users, but primarily of novice gamers, since it involves the production of innovative high-quality products at an affordable price. The main genres of games that this keyboard model is focused on: FPS (First Person Shooter), MMORPG (Massively Multiplayer Online Role-Playing Game), MOBA (Massively Multiplayer Online Battle Arena), RTS (Real Time Strategy).

The ThunderX3 TK25 keyboard comes in a simple but beautiful box, made in black and orange colors, which immediately attracts attention. On it, in addition to the keyboard itself, shown with the backlit keys turned on, the model name and the fact that it is made using membrane technology, you should pay attention to a separate icon indicating that this product belongs to the ThunderX3 brand. That is, its quality is such that it is intended for gamers, even beginners. In the upper right corner, two symbols are highlighted, meaning that the keyboard provides the ability to program individual keys and that it has several options for their backlighting. 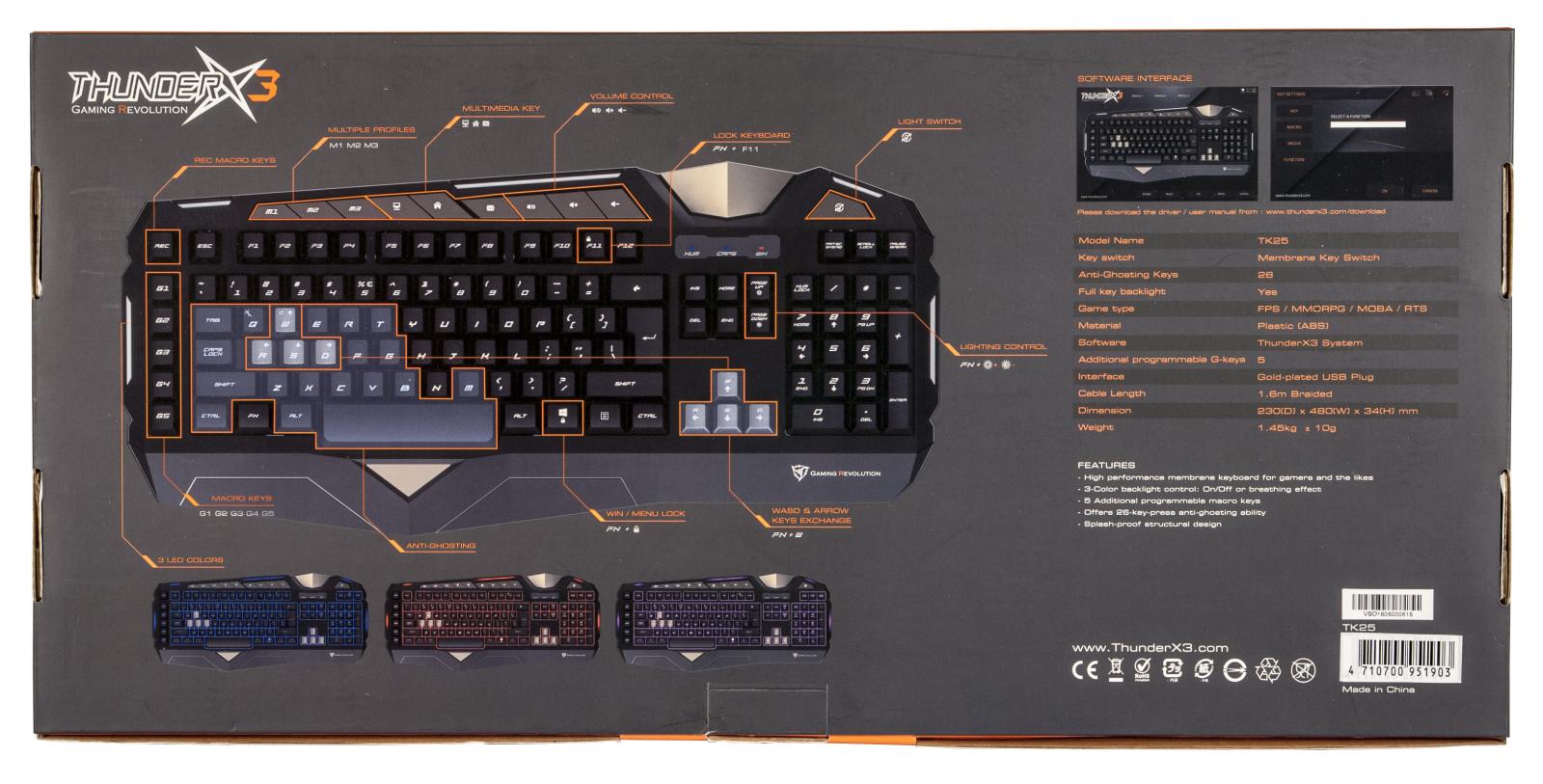 The most detailed features of the ThunderX3 TK25 keyboard are presented on the back of the box. Unfortunately, all inscriptions are in English.

As a small compensation, all the main features of the keyboard, which, according to the manufacturer, should be focused on, are given for the Russian-speaking buyer (however, not only) on the front side.

The ThunderX3 TK25 keyboard has a futuristic design that only touches the outer bezel. Its core is quite common and is a basic gaming keyboard with an additional 5 programmable G-keys extended to the left. 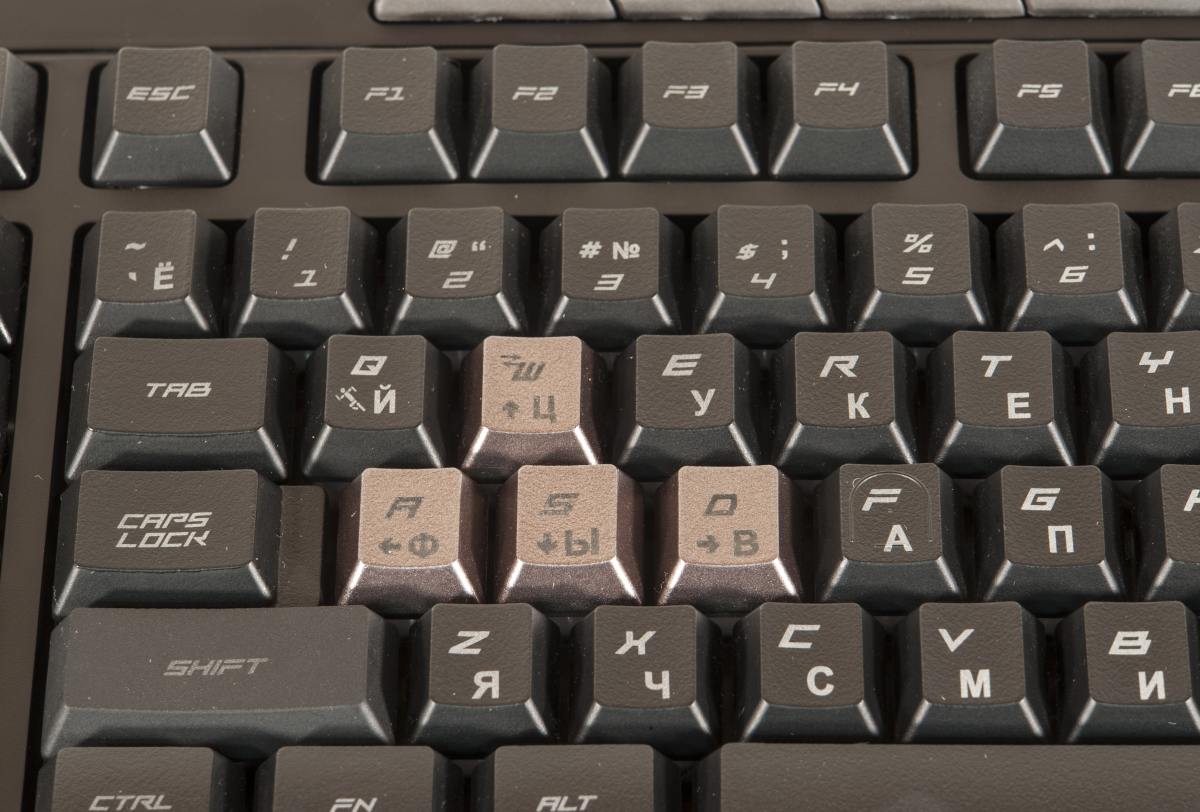 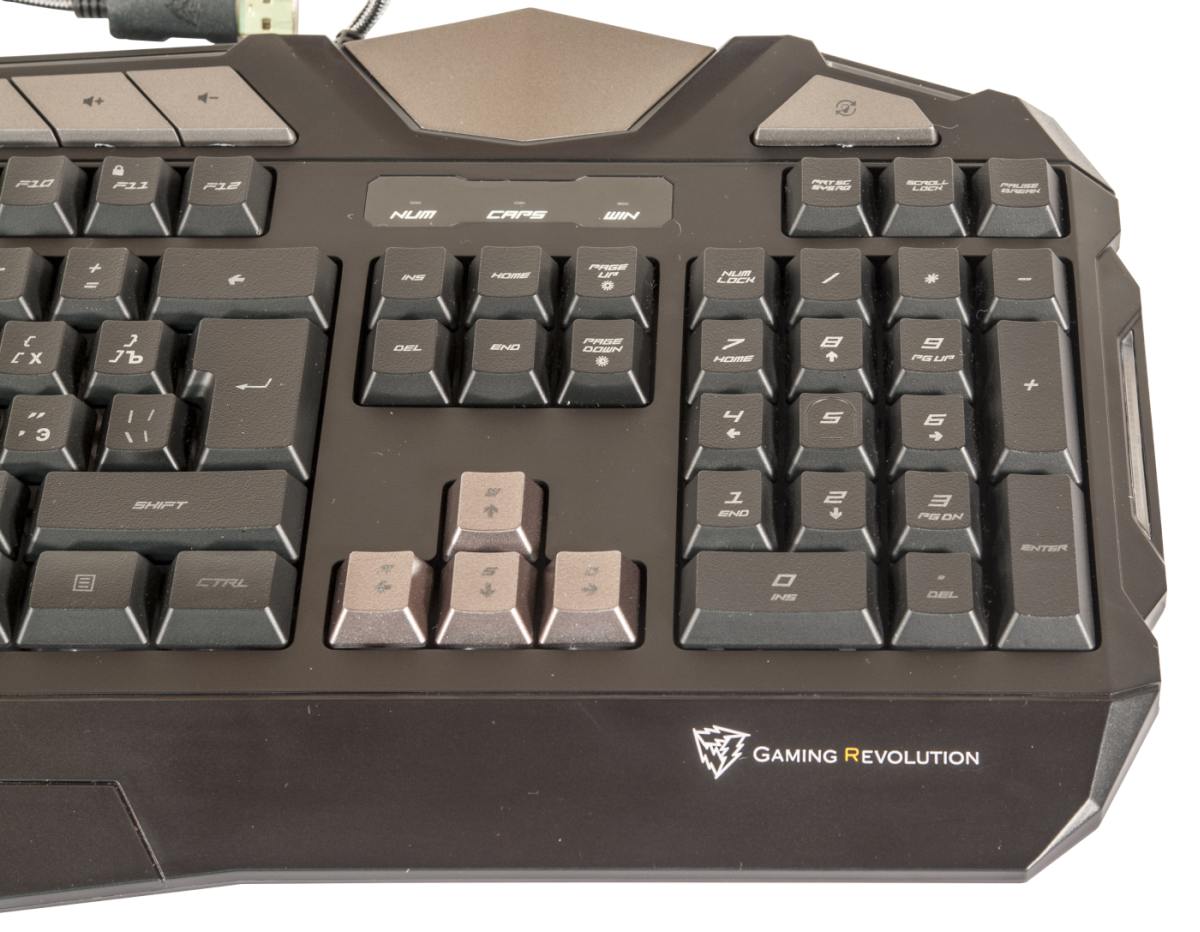 In order to further emphasize the futurism, a font was developed for the keyboard, with which characters are applied to the keys. Fortunately, this only applies to the English layout, and the Russian font is made in standard, well-readable letters. Unfortunately, on the highlighted groups of game keys, the letters printed on them are poorly readable, since the contrast between the color of the base and the applied sign is too small.

The distinctive design is emphasized by the three-color backlighting of the keys, which has five modes of operation. It is convenient to use it in a darkened room so that the bright light does not distract the gamer from the battles. 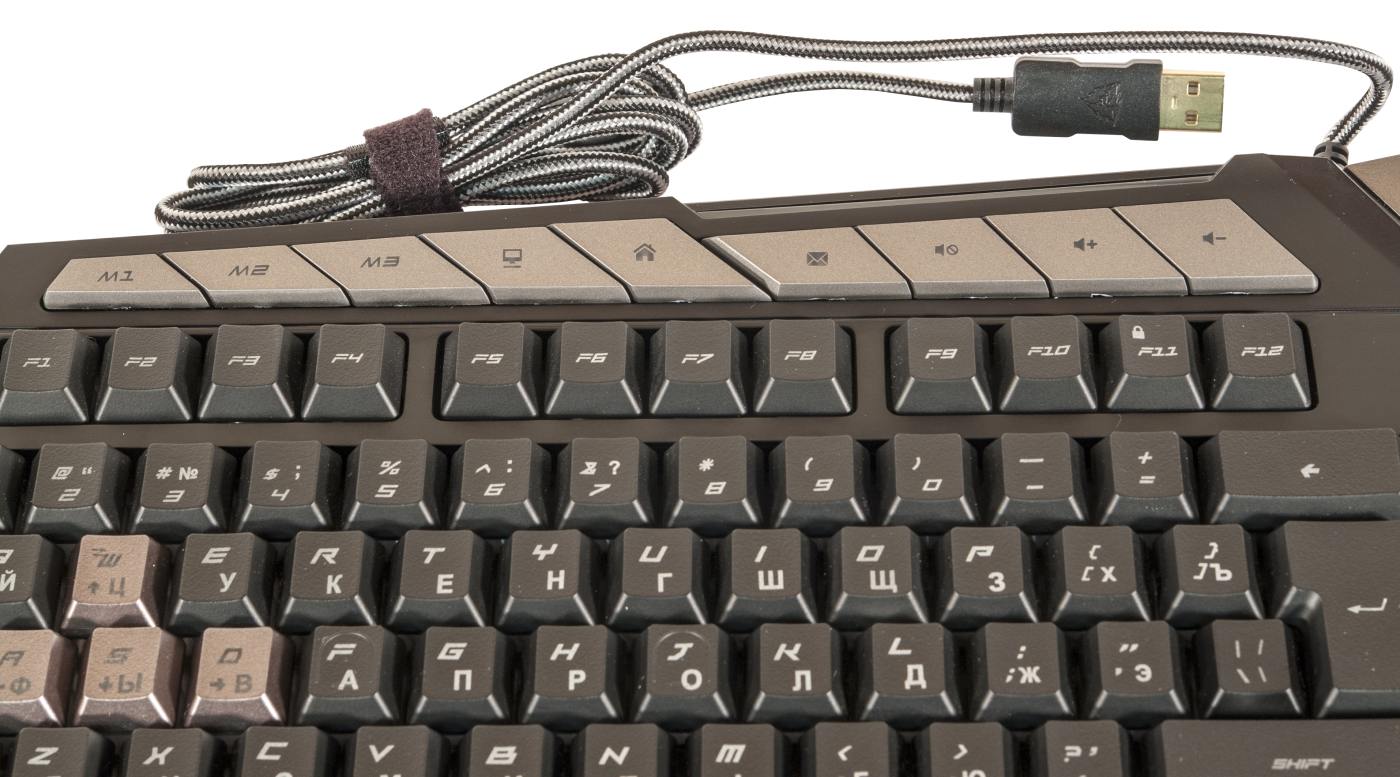 Above, in the trim of the ThunderX3 TK25 keyboard, there are additional keys that, for example, help the gamer not to switch between windows to adjust the volume or control the screen. There are also three very useful additional buttons that allow you to instantly switch between pre-configured user profiles, activating them with a simple click.

I would like to especially note the high-quality braided cord for connecting the keyboard, 1.6 meters long, which does not allow it to curl.

In the lower additional part of the keyboard case, a plastic extension is made for the comfort of the hands and to protect them from fatigue and to prevent the occurrence of tunnel syndrome. This will allow the player or ordinary user to work without thinking about time and without fear of getting painful. 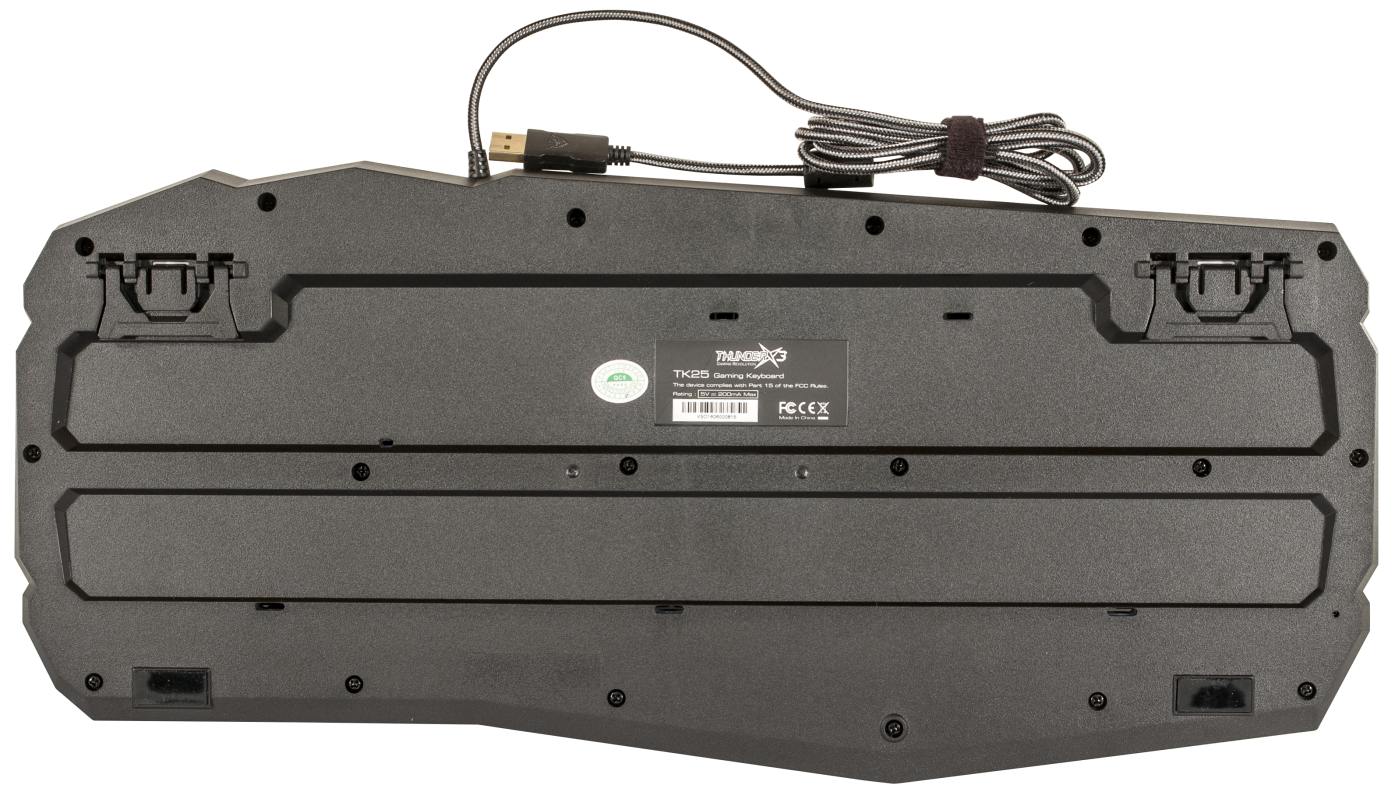 The reverse side of the ThunderX3 TK25 has special holes not only for ventilation, but also so that tea or coffee spilled on the keyboard can be spilled out of it. They are also useful for flushing the keyboard after the specified drinks have entered it. These “water procedures” will not affect the quality of work (after drying) of the keyboard. 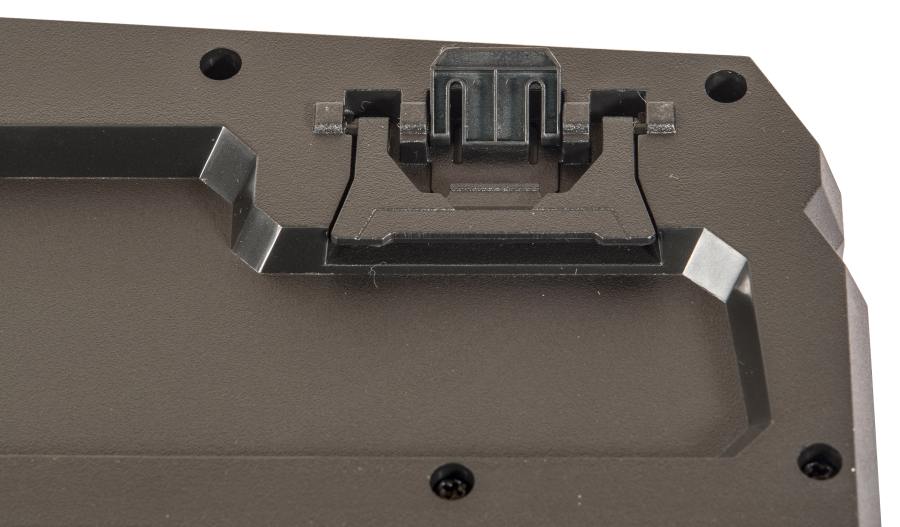 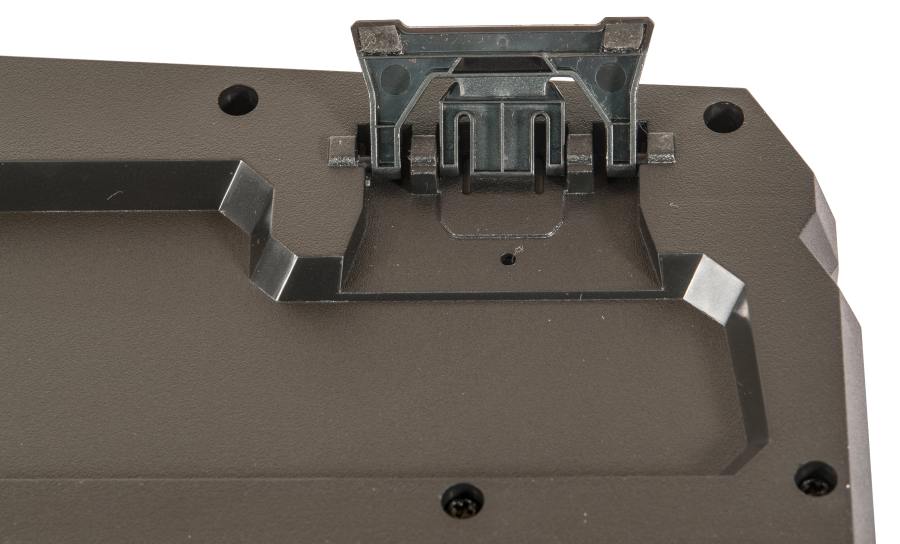 Legs regulating the angle of the keyboard are two-position with fixed positions. Thus, the user can choose for himself the optimal parameters from the three proposed.

For its keyboard models, ThunderX3 provides a proprietary management utility. It does not yet have a Russian-language interface, and since the devices have just entered the market, it is quite possible that the software will be changed in the future. On the other hand, we can already say that the management utility has turned out to be very successful and easy to use. 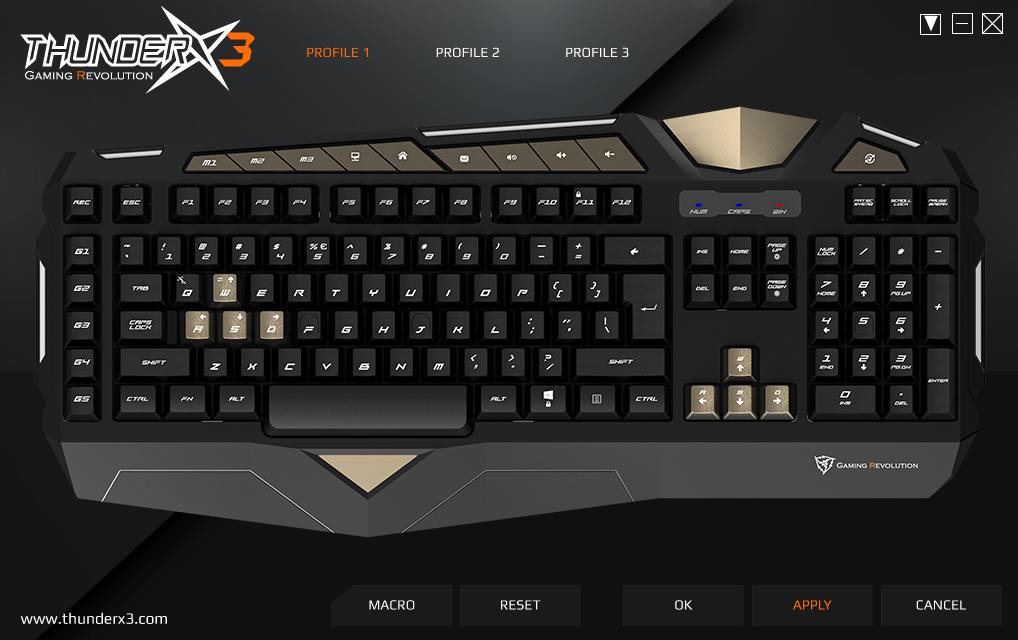 In total, the user has three built-in profiles, each of which has customizable parameters. 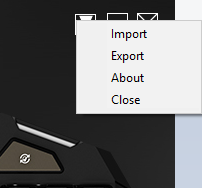 In addition, it is possible to export and import profile settings, so the user can create as many different configurations as he wants. However, only three of them will be saved to the keyboard’s internal memory. In the button settings, the user can set certain parameters for all keys, reassign buttons, and create macros. 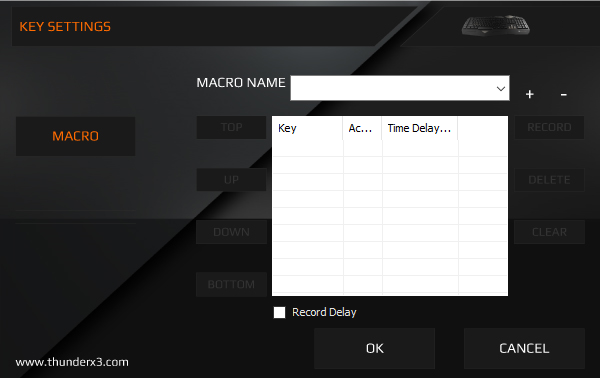 For each key (except for specialized ones), the utility allows you to set up a macro that would perform a sequence of actions. 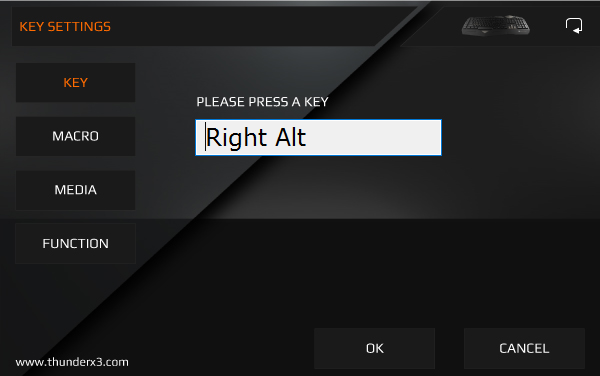 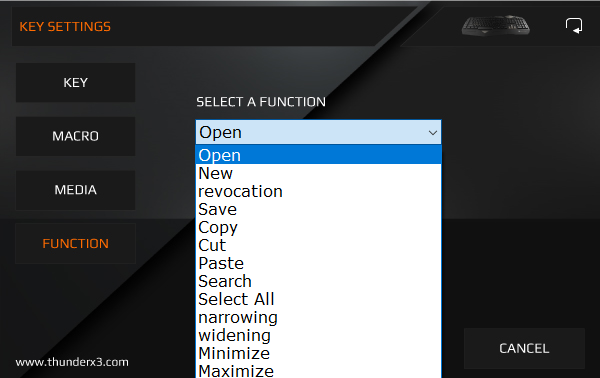 For each key, in addition to a macro, you can configure another button, work with media, or a function related to WinAPI. In general, the management utility evokes positive emotions during operation, and in terms of functionality it can easily compete with many well-known utilities of well-known brands.

The ThunderX3 TK25 keyboard is originally designed for the average or novice gamer, as well as for the common user. And she copes well with the tasks that these categories of users put before her. It has everything you need: programmable user profiles, programmable G-keys, backlighting, and quality build and reliability guaranteed with the right components. This keyboard clearly has a future, and it will find its buyer, especially since it costs (at the time of this writing) less than 2 thousand rubles.