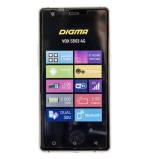 Digma, a well-known Russian manufacturer of inexpensive, but at the same time good models of smartphones and tablets, launched new models of VOX smartphones on the market this fall. Among its products there are a lot of other devices, but we will dwell on the new model of the Digma VOX S503 4G smartphone in more detail. This is the first model in the lineup to support 4G (LTE) networks, but this is by no means all of its advantages. First of all, it is interesting in that it has every chance of becoming a hit of sales among smartphones with a budget of up to 10,000 rubles. At the same time, despite the low price, it has a very good combination of performance and design. In general, this model is great for everyday work, and given the difficult economic situation, it looks very attractive. The Digma VOX S503 4G smartphone comes in two colors – black and white. A black model has arrived at our editorial office, and we will talk about it in this review. 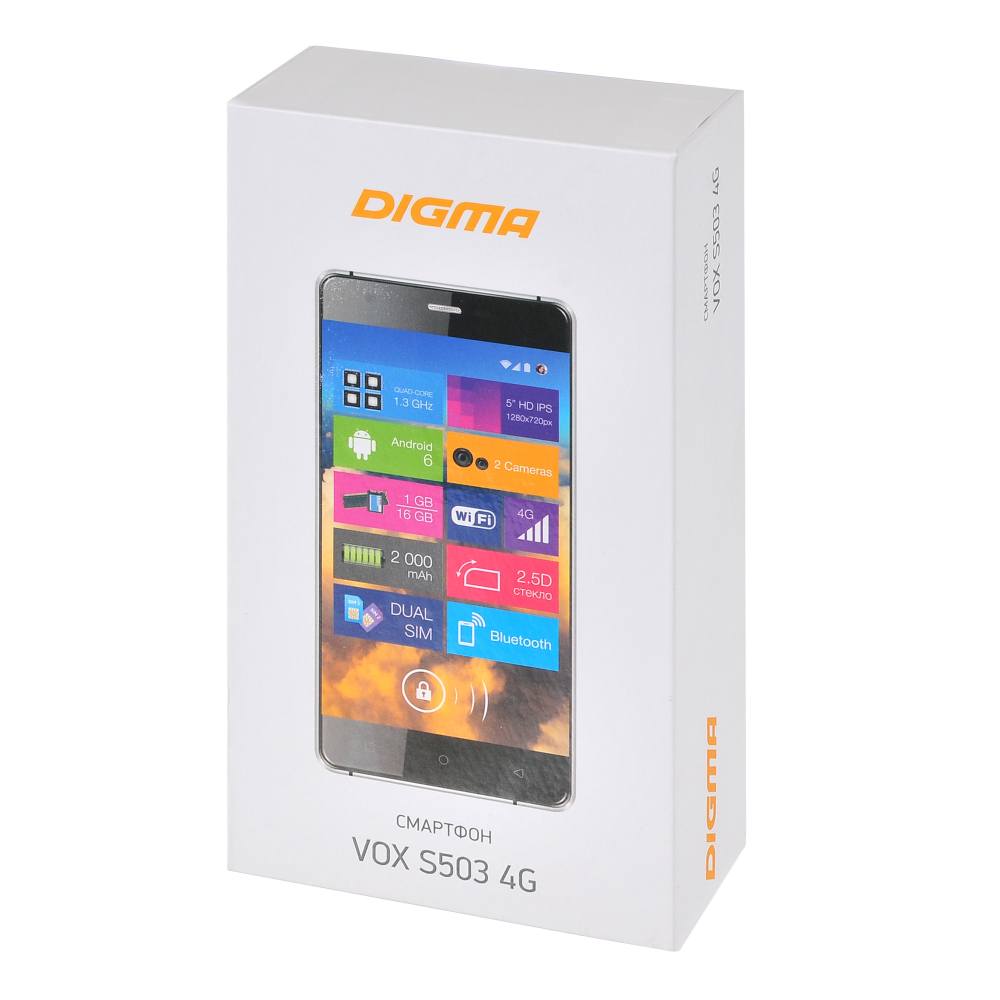 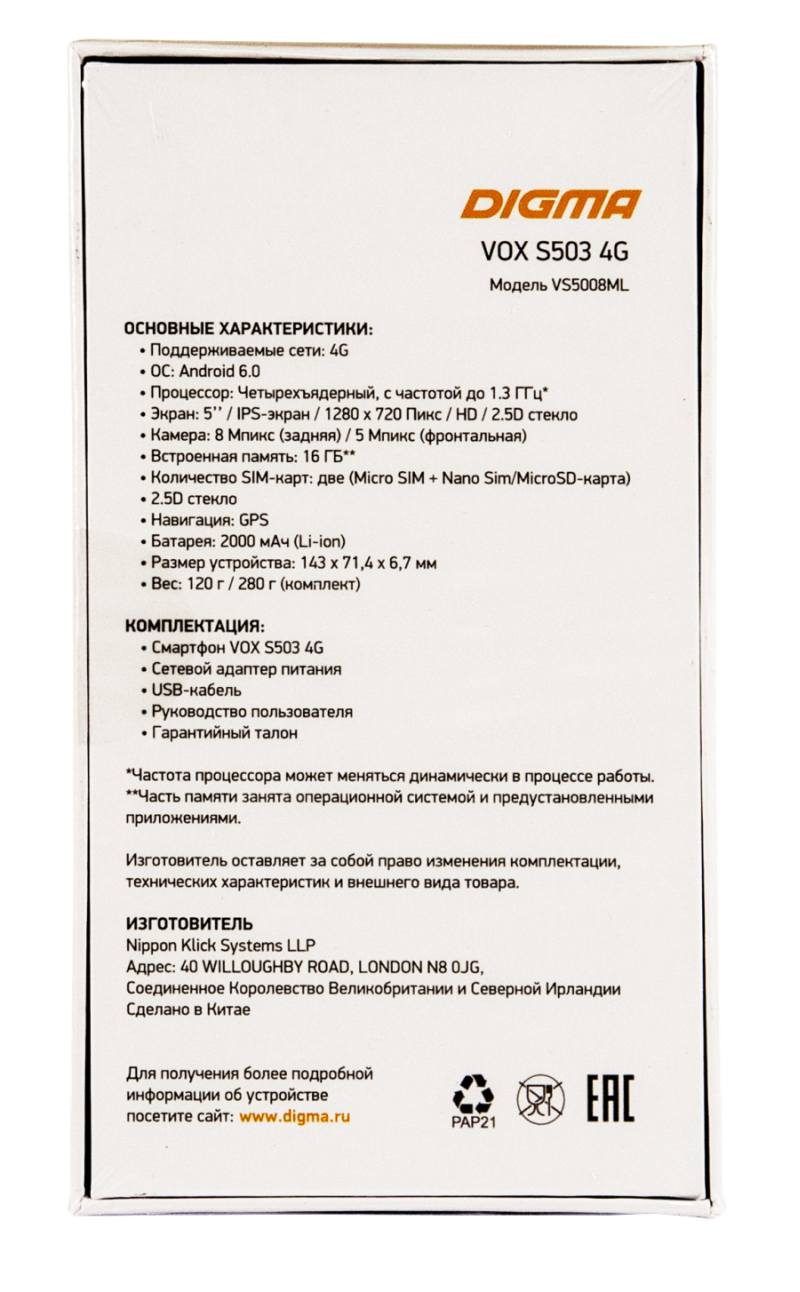 Supplied in a white cardboard box with a picture of a smartphone and data on its characteristics on the back of the package. It should be noted that the Digma VOX S503 4G model is focused on the Russian market, so all the inscriptions are translated into Russian. In addition, unlike phones bought in China, it boasts a warranty and service in Russia. 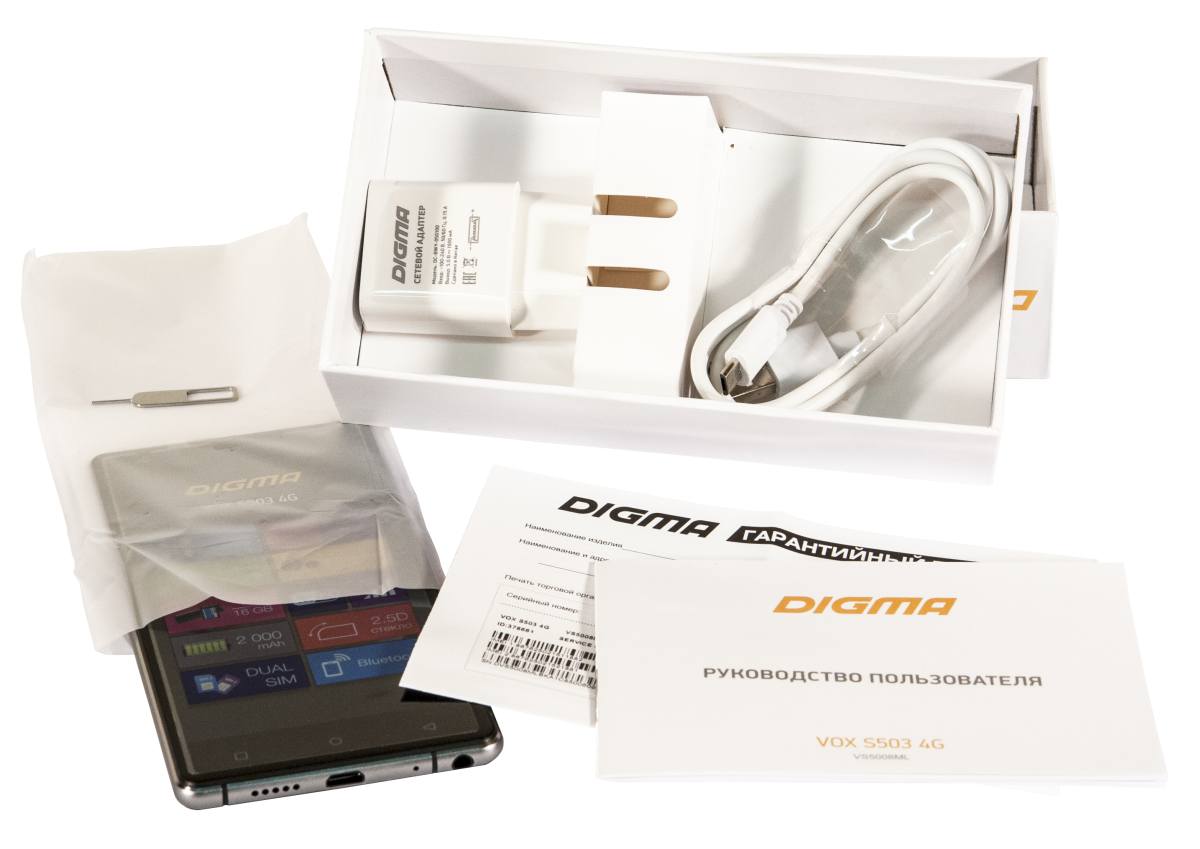 The package includes a charger, microUSB cable, a special clip for opening the SIM card tray, a brief instruction and a warranty card. Nothing extra. 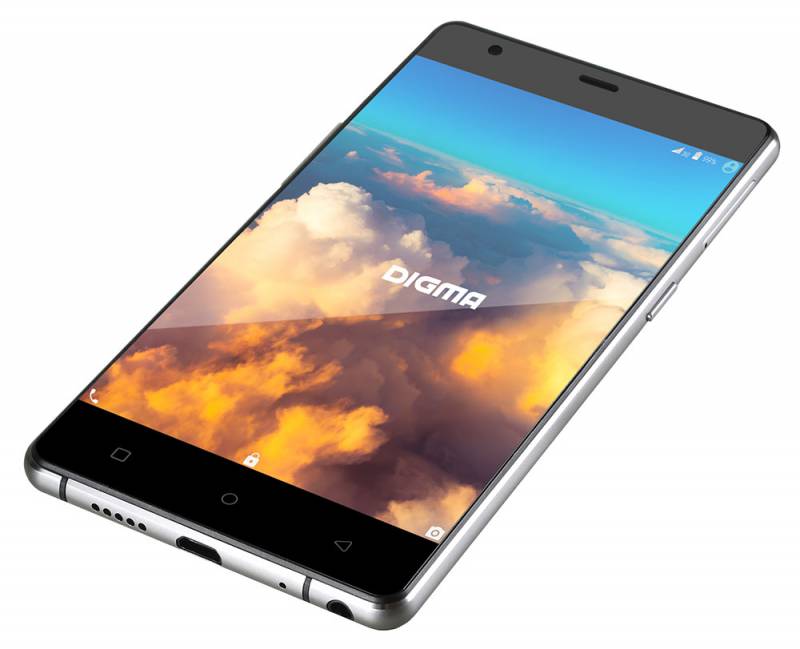 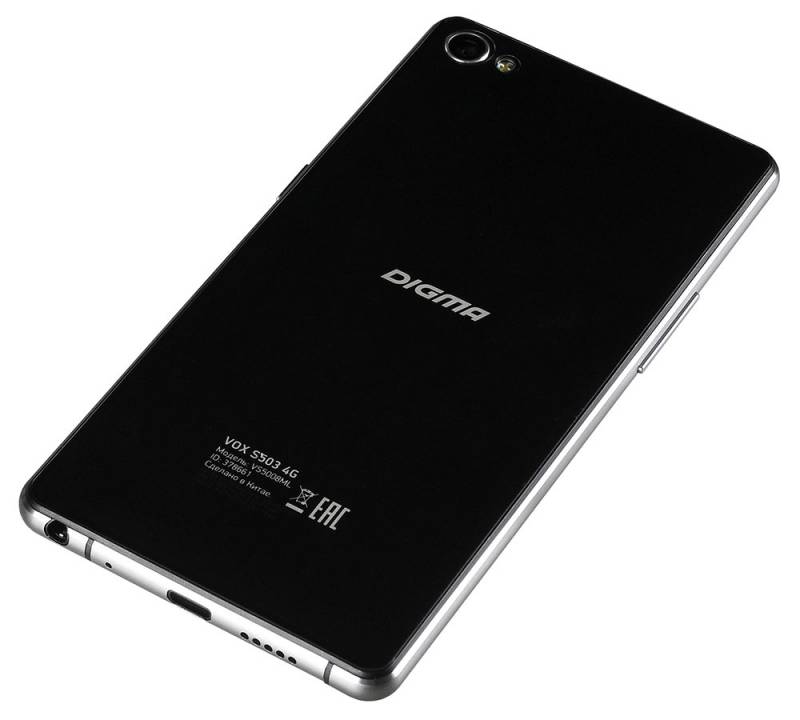 Smartphone Digma VOX S503 4G measures 143 × 71.6 × 6.7 mm, and the weight of the model is only 135 g. The design of the case is quite standard, but not devoid of some elegance. At first glance, one cannot say that this is a budget model, but when you pick it up, you get the impression that you are holding a premium class device.

The power button is located on the right side of the device, while the small volume rockers are located on the left side. The assembly of the device is admirable – all the elements are perfectly fitted to each other, and the side edges do not cut fingers and are neatly rounded at the joints of metal and glass. 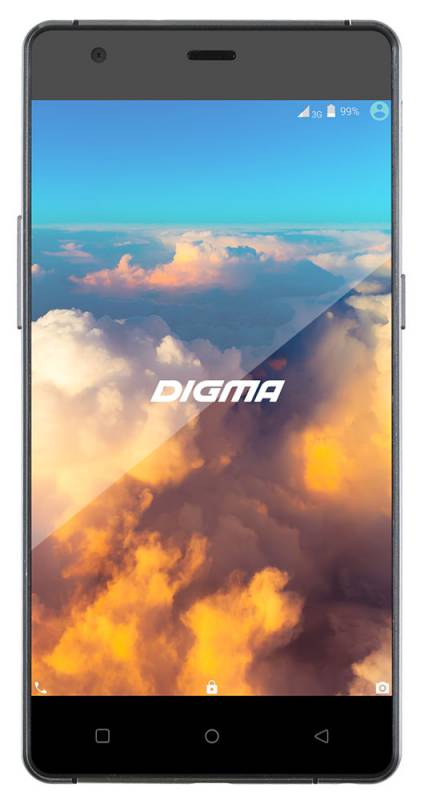 On the front panel, the entire space is occupied by a 5-inch screen built on an S-IPS matrix with a resolution of 1280×720. Initially from the factory, the main panels of Digma VOX S503 4G are covered with protective and transport films, there is an oleophobic coating on the protective film. The screen has a high pixel density per inch – 320 ppi, good brightness and high contrast, as well as excellent viewing angles. The matrix is ​​protected by scratch-resistant glass. If there is a speaker above the screen and a 8.3 megapixel front camera, then under the screen itself there are three touch-sensitive control buttons, which are also protected by glass.

A microUSB connector with OTG support and a hole for connecting headphones and headsets are located on the bottom of the smartphone. It should be noted that the cable in the USB connector holds very well, and there is practically no backlash. In addition, there are also four round holes for the main speaker and one small one for the microphone.

There is a small dark-colored insert on the upper end, but its purpose remains unknown to us. In any case, no additional sensors or modules were found in the phone. 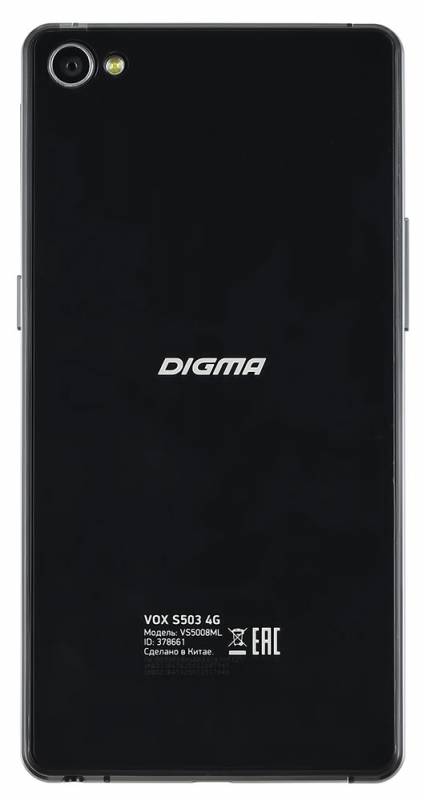 The main rear camera is on the back, and its lens is offset to the very edge of the phone. It will allow you to take pictures with a resolution of 4864 x 2736 (13.3 megapixels) and shoot video in FullHD (1920 x 1080). For shooting at night, there is a small bright LED flash. It is worth noting that the rear camera has an autofocus function, a face recognition system and support for creating HDR photography, which is a very good set for a modern smartphone. In addition, the back cover contains the manufacturer’s logo, model name and a short description. The lid itself is painted in the color of the case and has a mirror reflection. 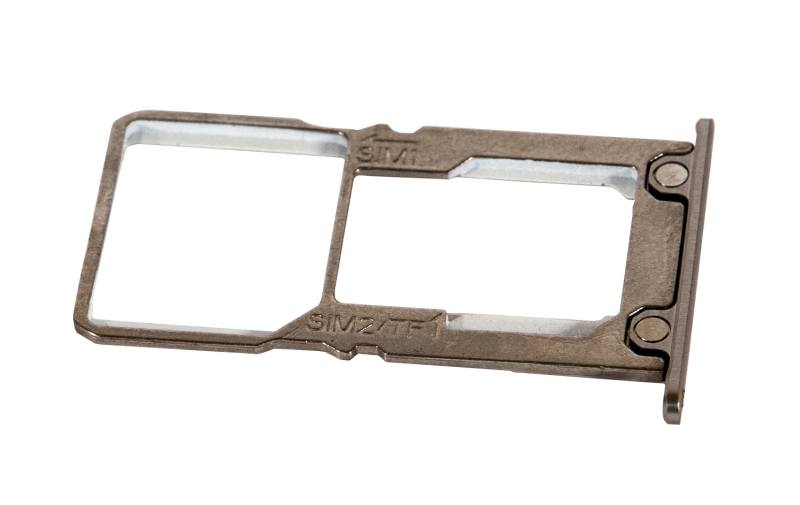 It should be noted that one of the slots for microSIM cards is universal and supports the installation of microSD memory cards (up to 128 GB), which allows you to expand the capacity of the device. Both cellular modules can be active, which allows you to receive calls from different operators at the same time. Therefore, the user of this model can choose the most favorable tariff plans for him and, if necessary, separate personal and business calls. 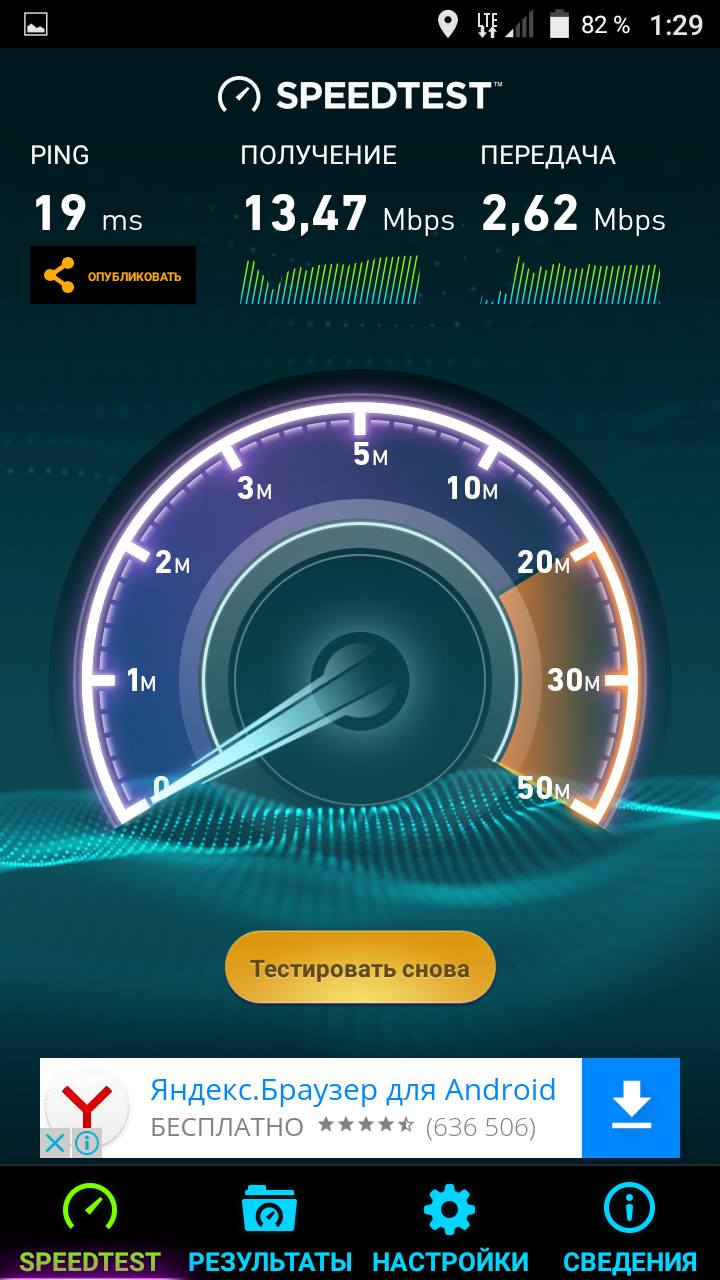 It supports work in 4G networks, and this is the main advantage of this model. The connection is stable, the signal level is confident, at least for Beeline and Megafon operators. 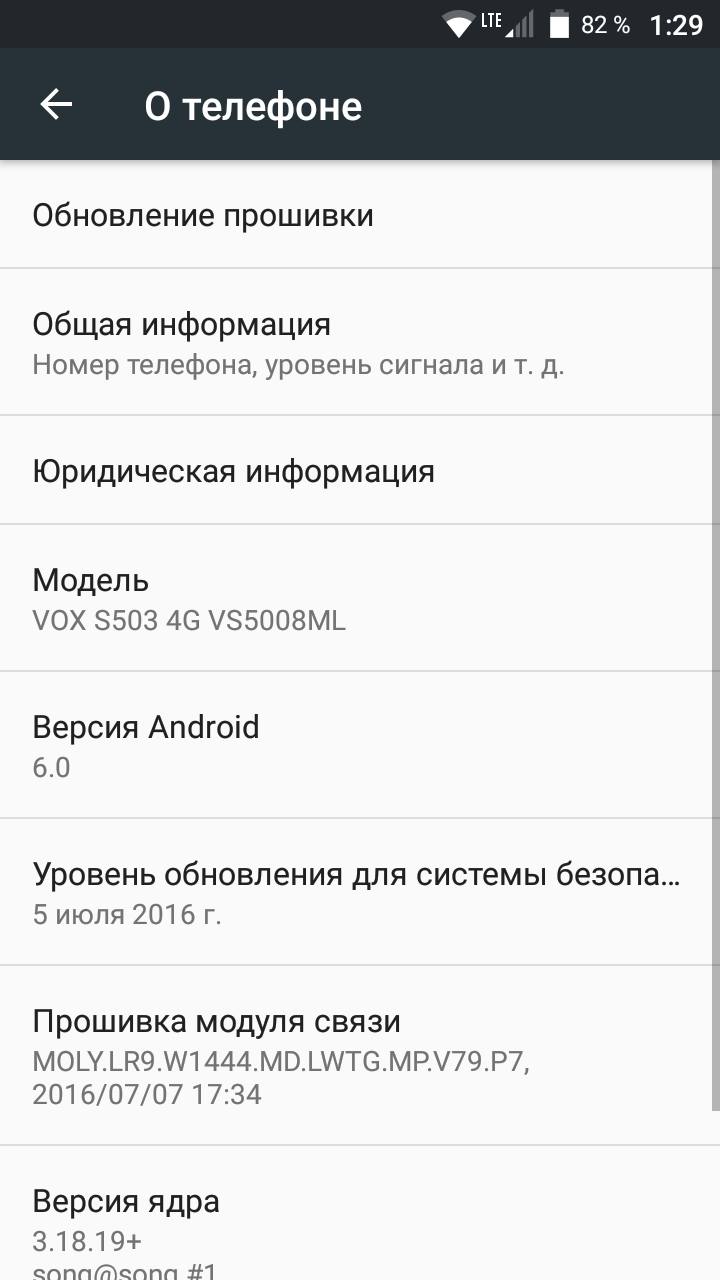 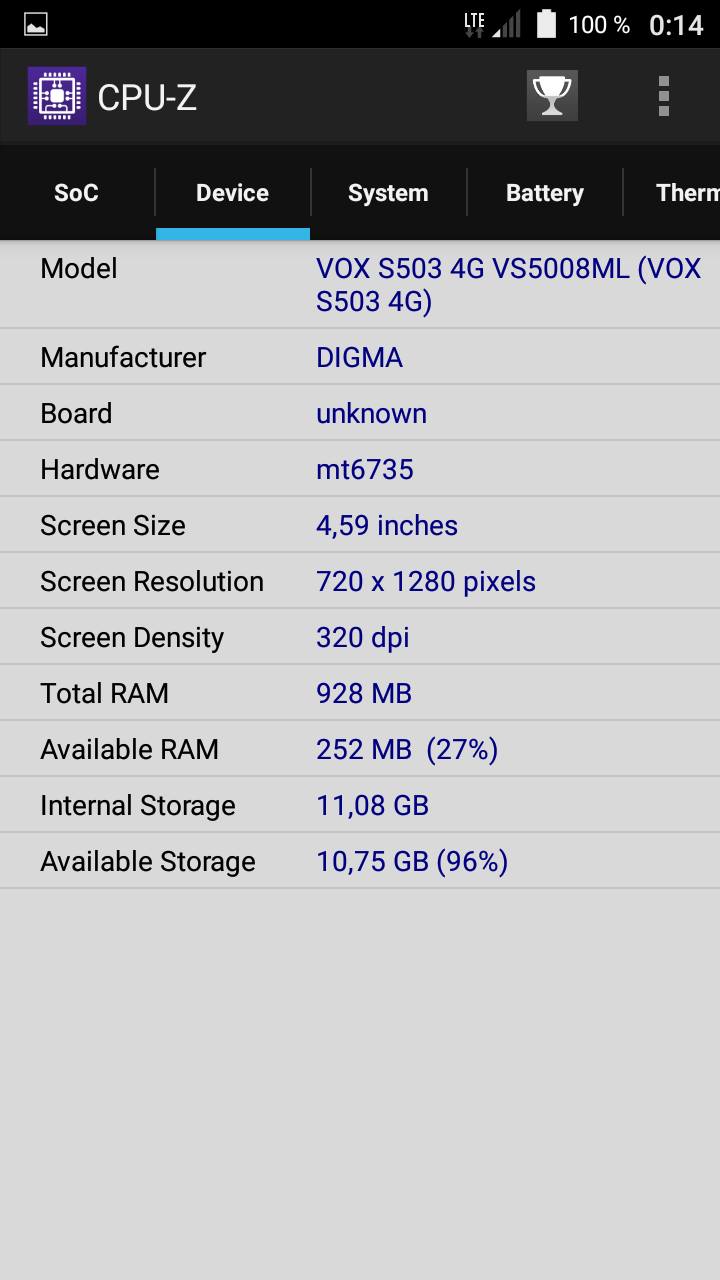 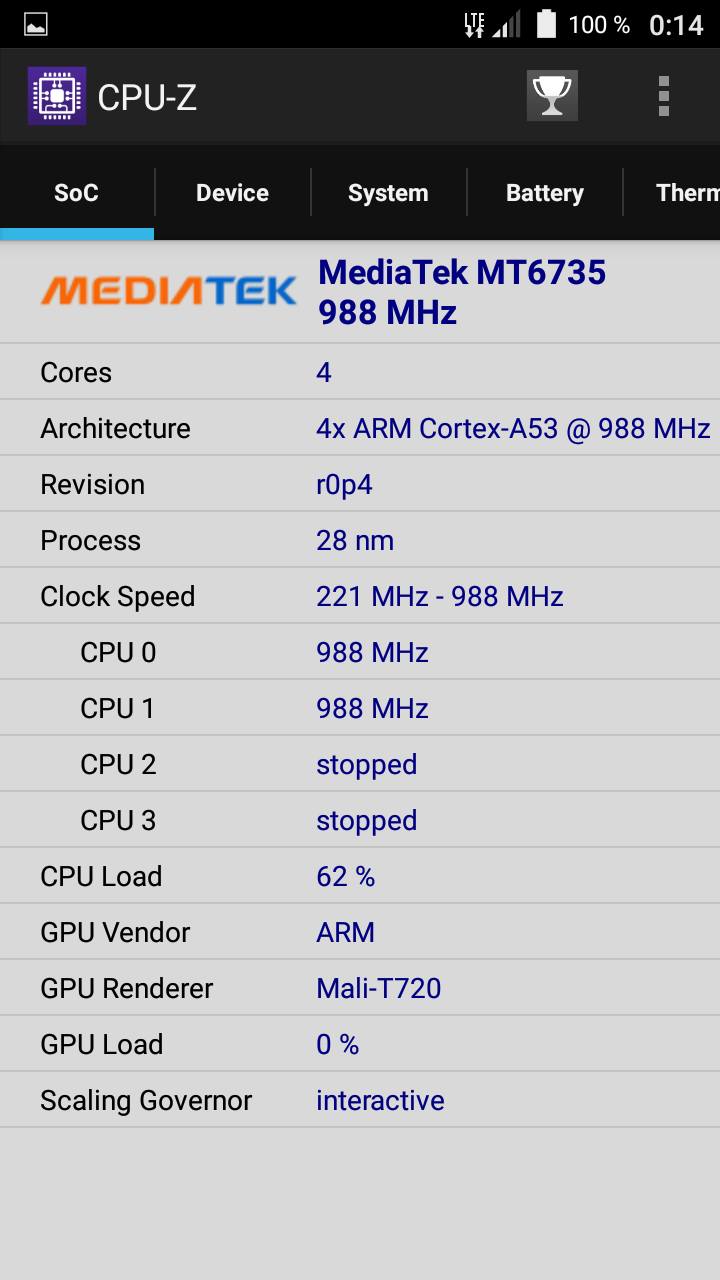 As the hardware filling of this model, the MediaTek MT6735P SoC is used, which works in conjunction with the Mali-T720 GPU. The four cores of the central ARM processor (Cortex A53) operate at a frequency of 1 GHz, while some of the cores in the process may be inactive to reduce power consumption if they are not needed. The graphics core runs at 500 MHz. This model also contains the entire set of necessary peripheral wireless modules, namely: Bluetooth 4.0 and Wi-Fi 802.11 b / g / n (2.4 GHz frequency, with support for Wi-Fi Direct, Wi-Fi Display). A GPS module with A-GPS support, an FM tuner, an accelerometer, light and proximity sensors, a gyroscope and a digital compass are also installed.

The microUSB port used in this model supports MHL and OTG standards, so that a wide variety of external devices can be connected to the smartphone. It is worth noting that on the box with the smartphone there is an inscription stating that the phone is equipped with an internal memory of 16 GB. It should be noted that only no more than 11 GB of this volume is provided to the user for data, since the main part is occupied by the operating system itself. Therefore, when purchasing this model, you should immediately install a microSD card so that there is a place where you can write information and applications. 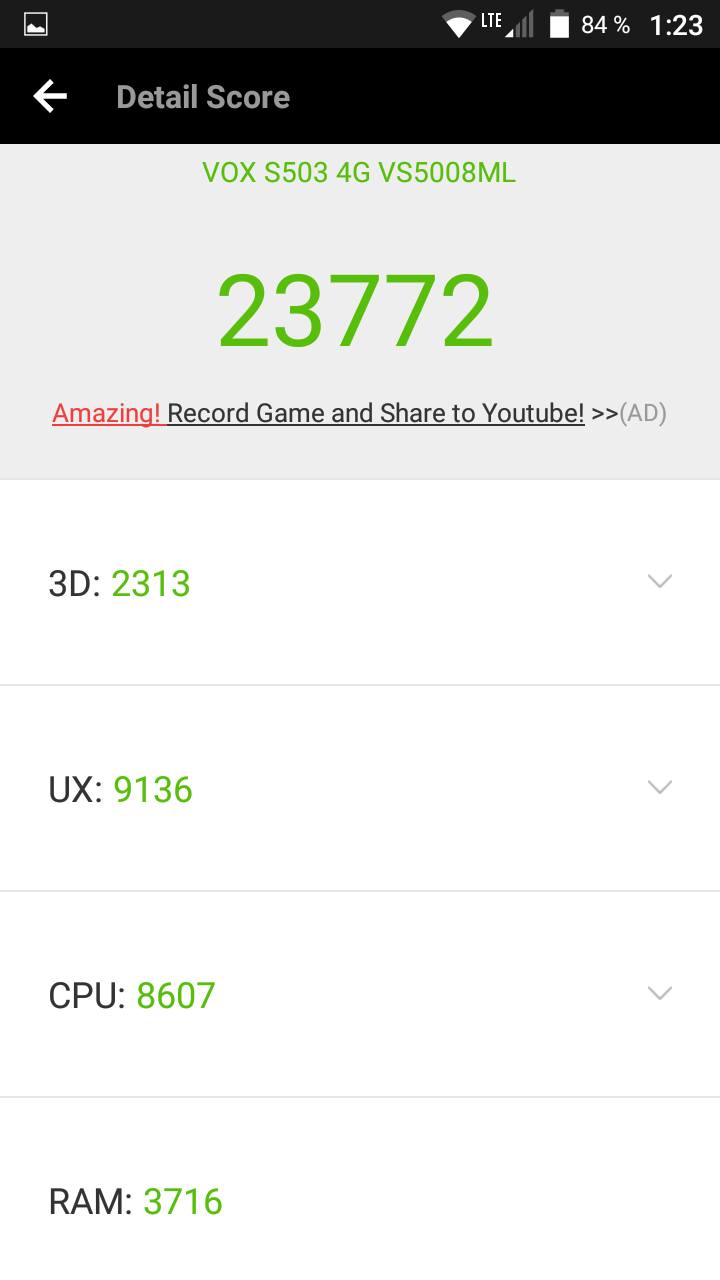 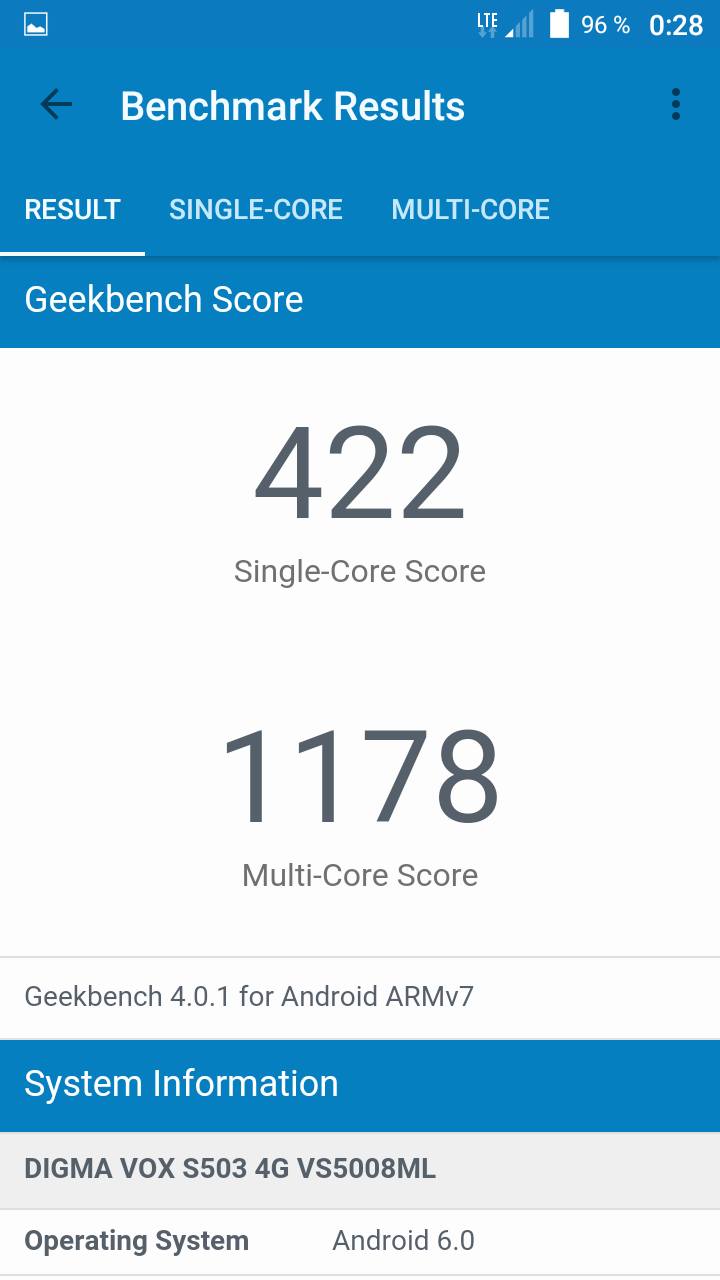 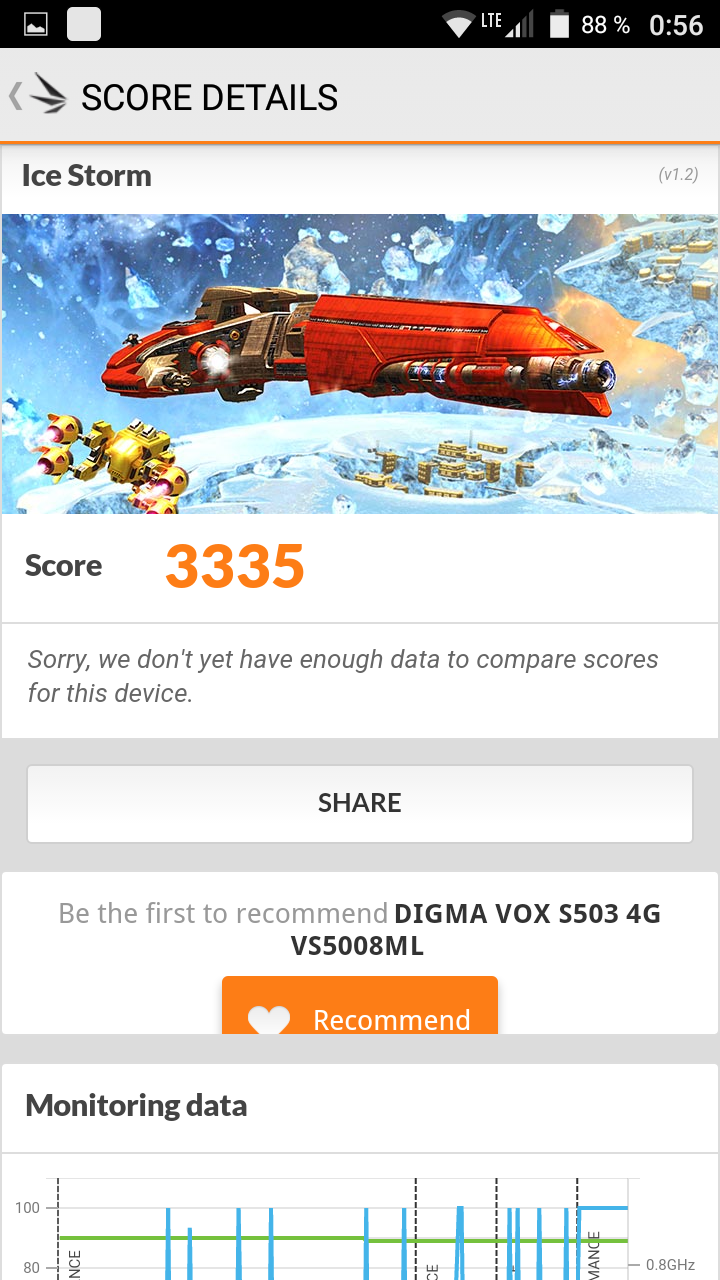 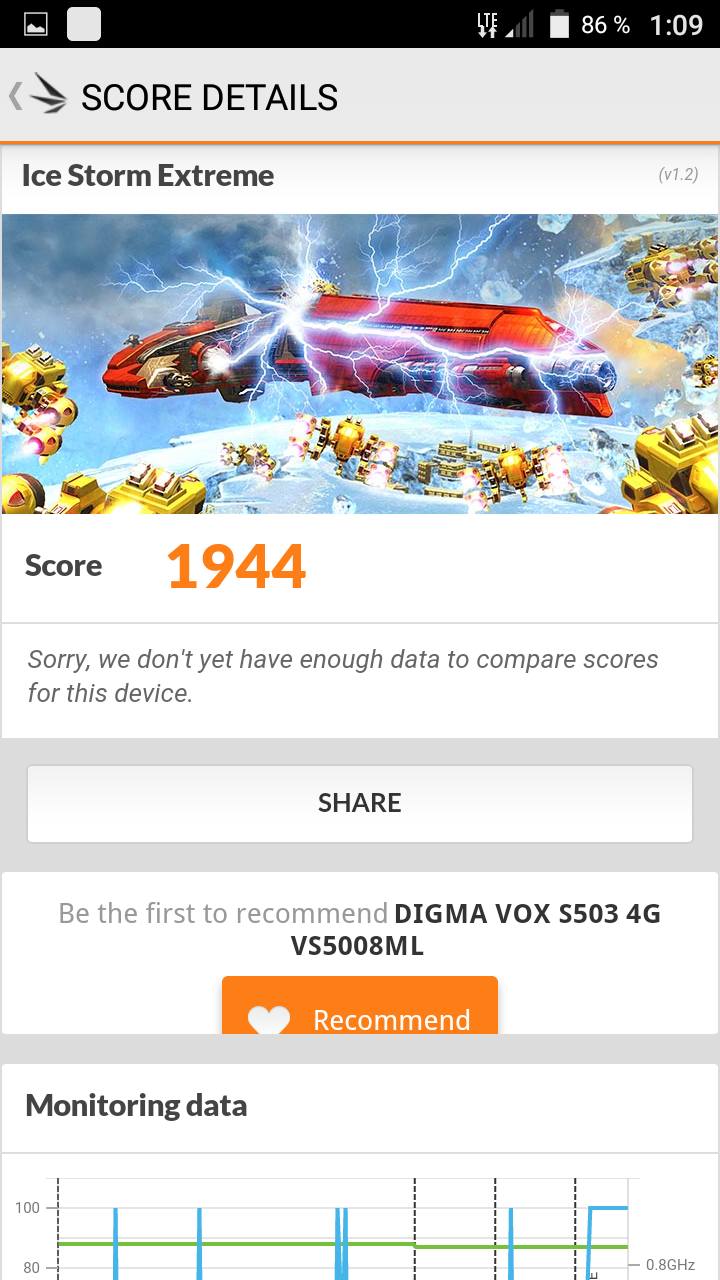 It is quite natural that the Mediatek SoC used in this model has not very high performance in comparison with new top solutions from other manufacturers. On the other hand, its performance, as well as the power of the Mali T720 graphics core, is quite enough to run most of the toys and applications currently available in the Google Play store. 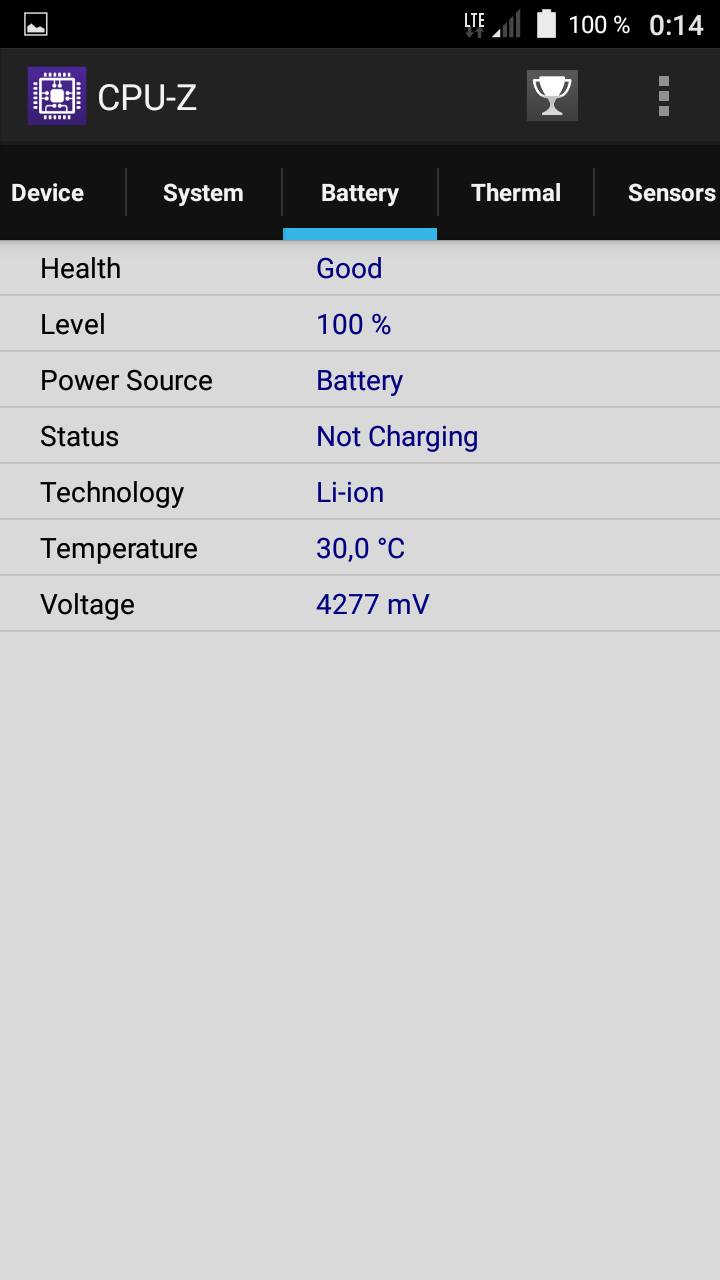 According to the manufacturer’s website, this model has a 2000 mAh battery. It should be noted that the capacity of this battery is sufficient for long-term operation in conditions of maximum performance. This is most likely due to the high energy efficiency of the processor itself, as well as the advantageous screen resolution. As in most models of modern smartphones, a non-removable battery is installed here, so it can be replaced only at an authorized service center. 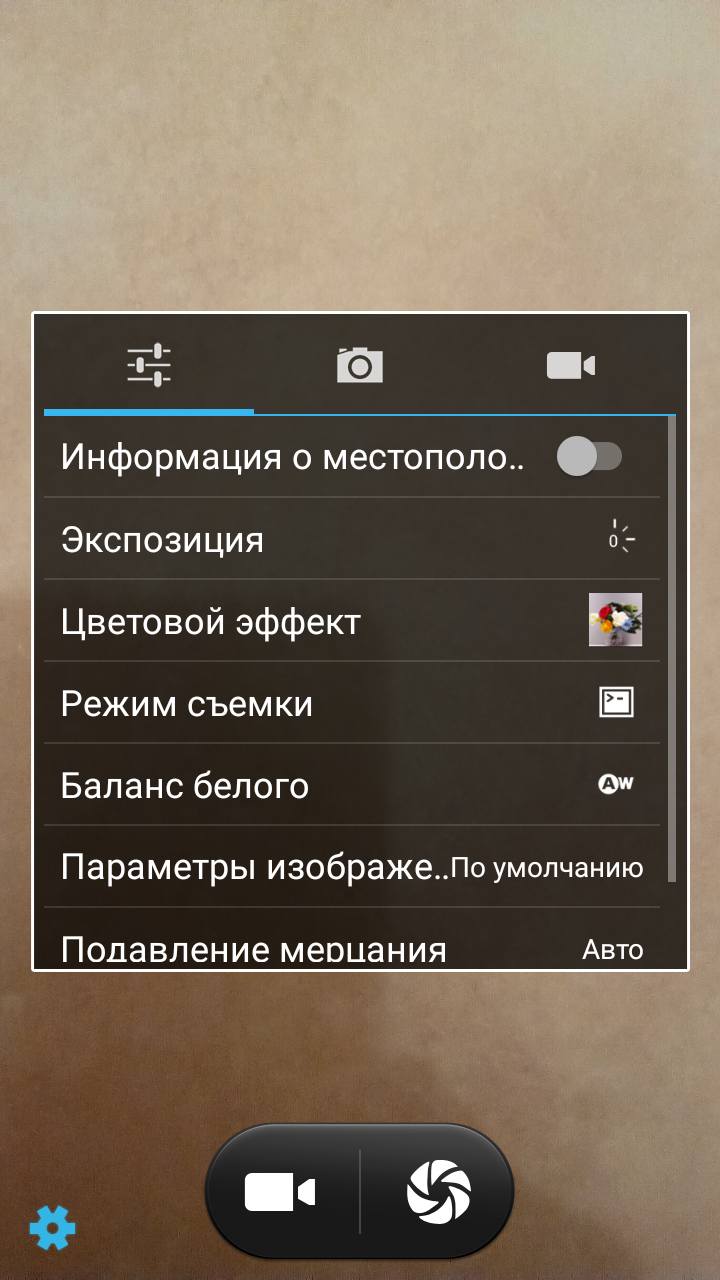 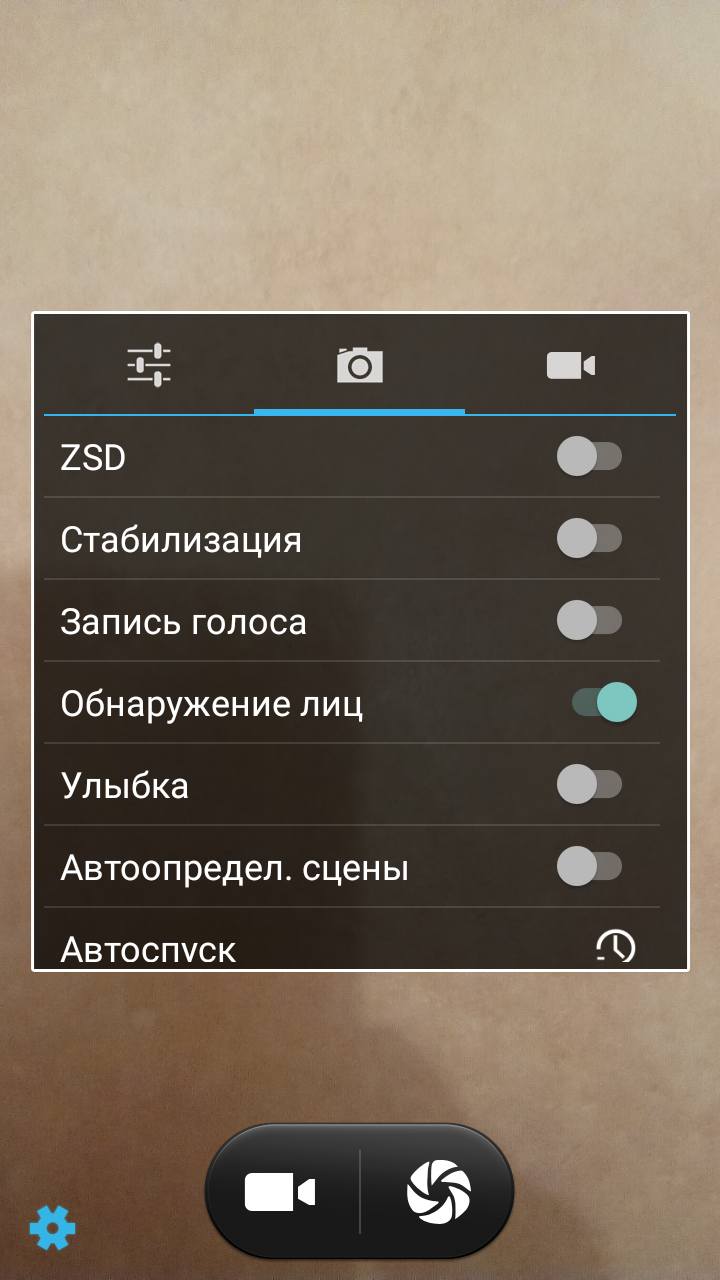 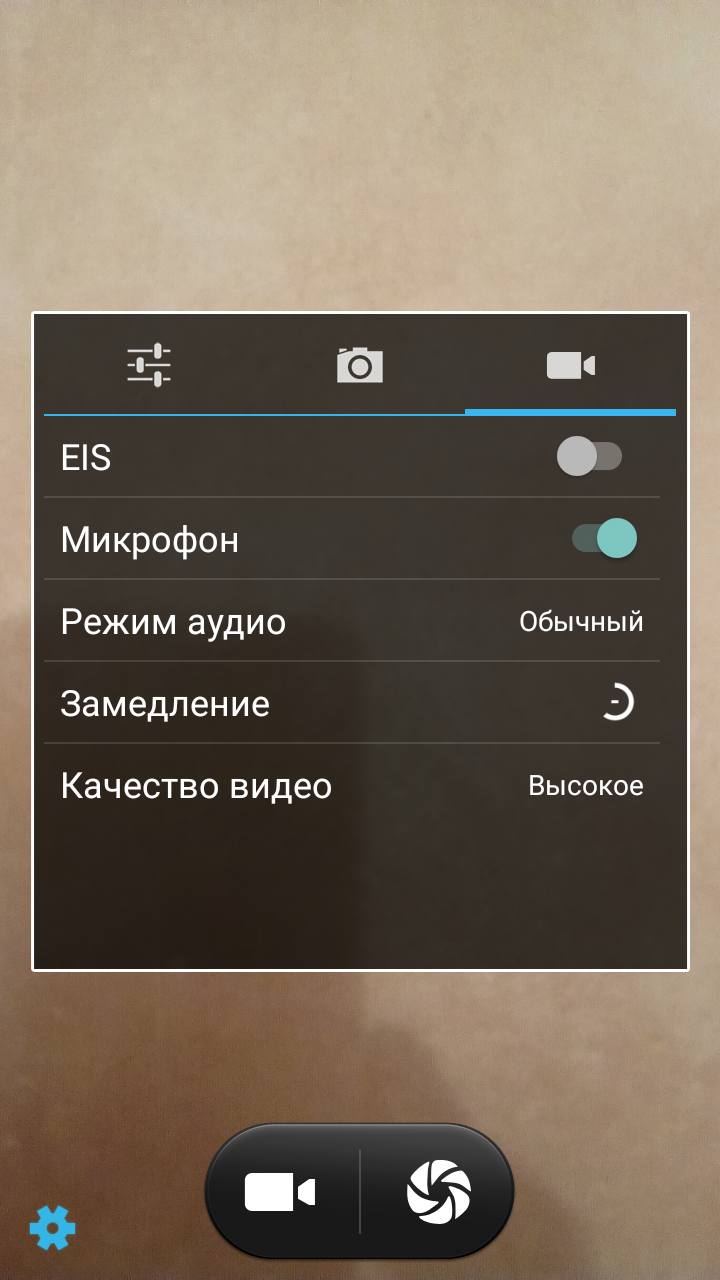 It cannot be ignored that the camera of this model takes good pictures, however, in order to achieve a good result, you need to adjust the settings a little, since the auto mode does not always correctly determine the type of ambient light. However, autofocus and flash work almost flawlessly. 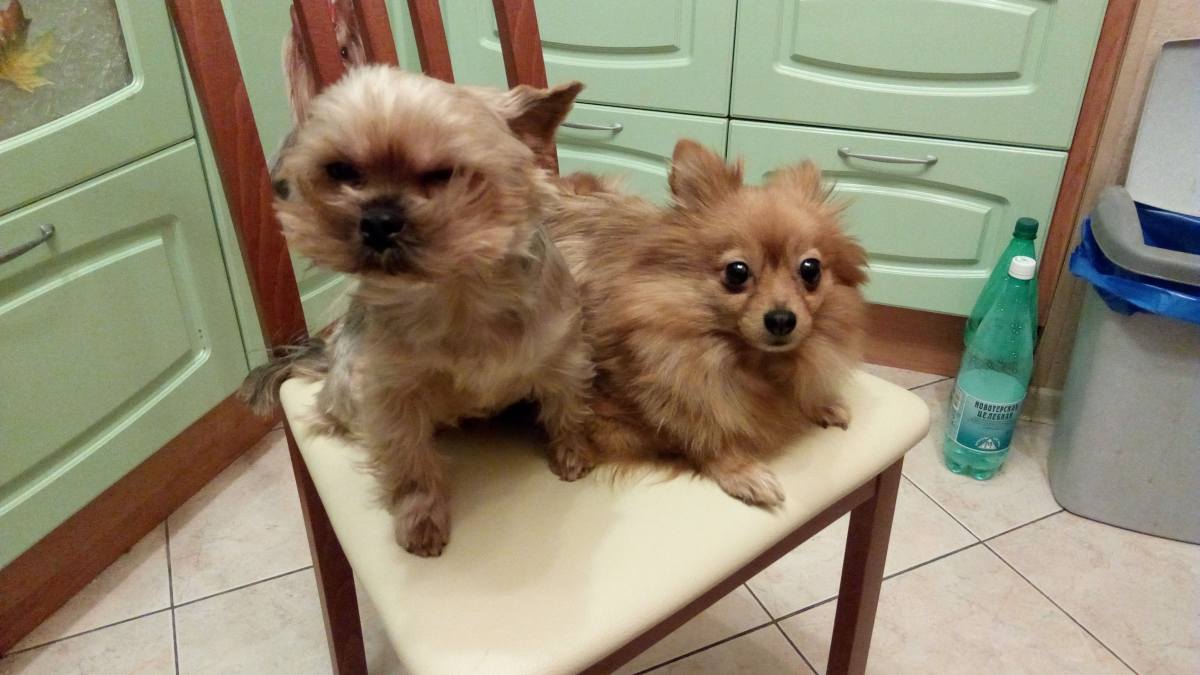 In sunny times and in the presence of artificial lighting, the smartphone camera will delight the owner with high quality pictures. The app has several color presets and creative filters, remote shutter trigger, panoramic mode. 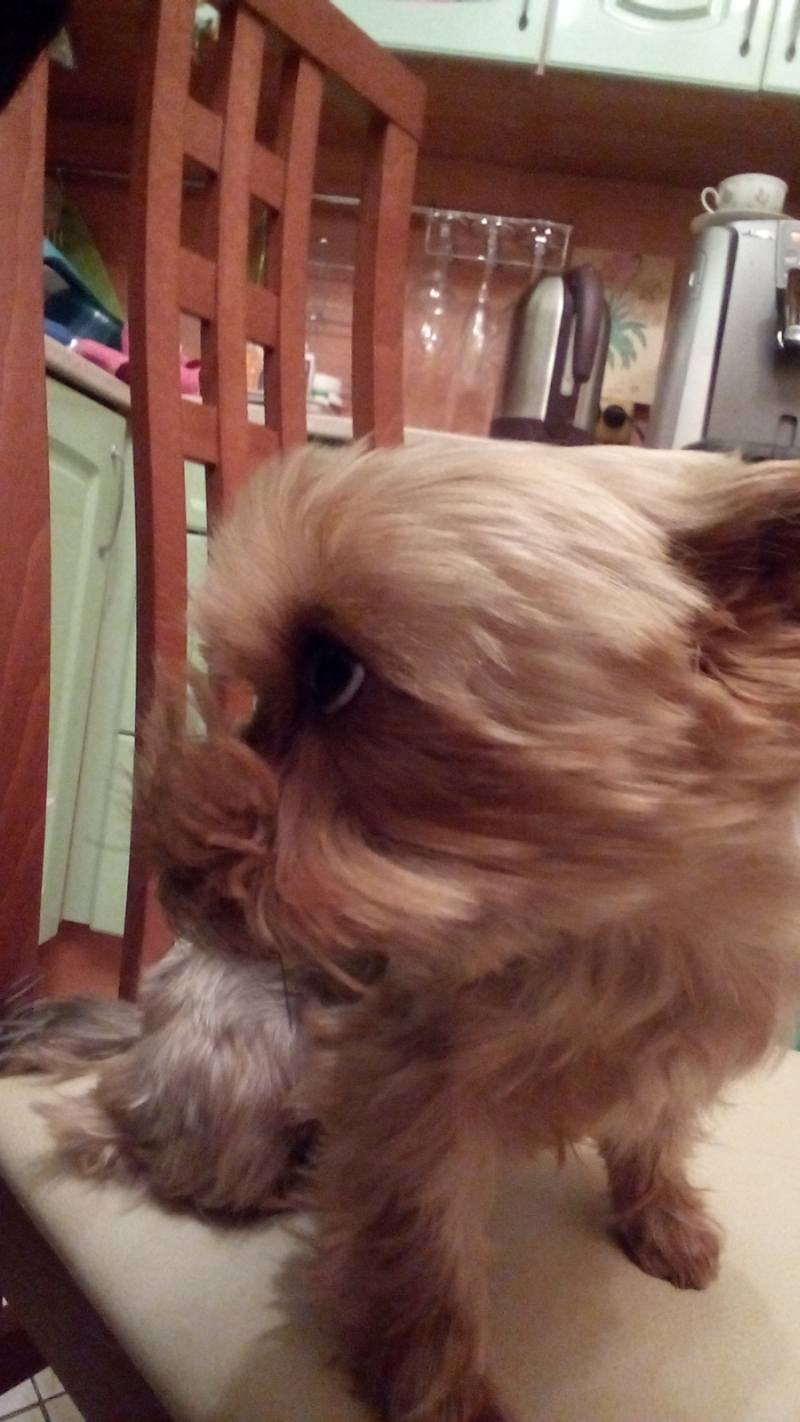 The front camera for selfies is of course inferior to the main one in quality, but pictures with it are quite good, in addition, there is a separate function for selfie correction. 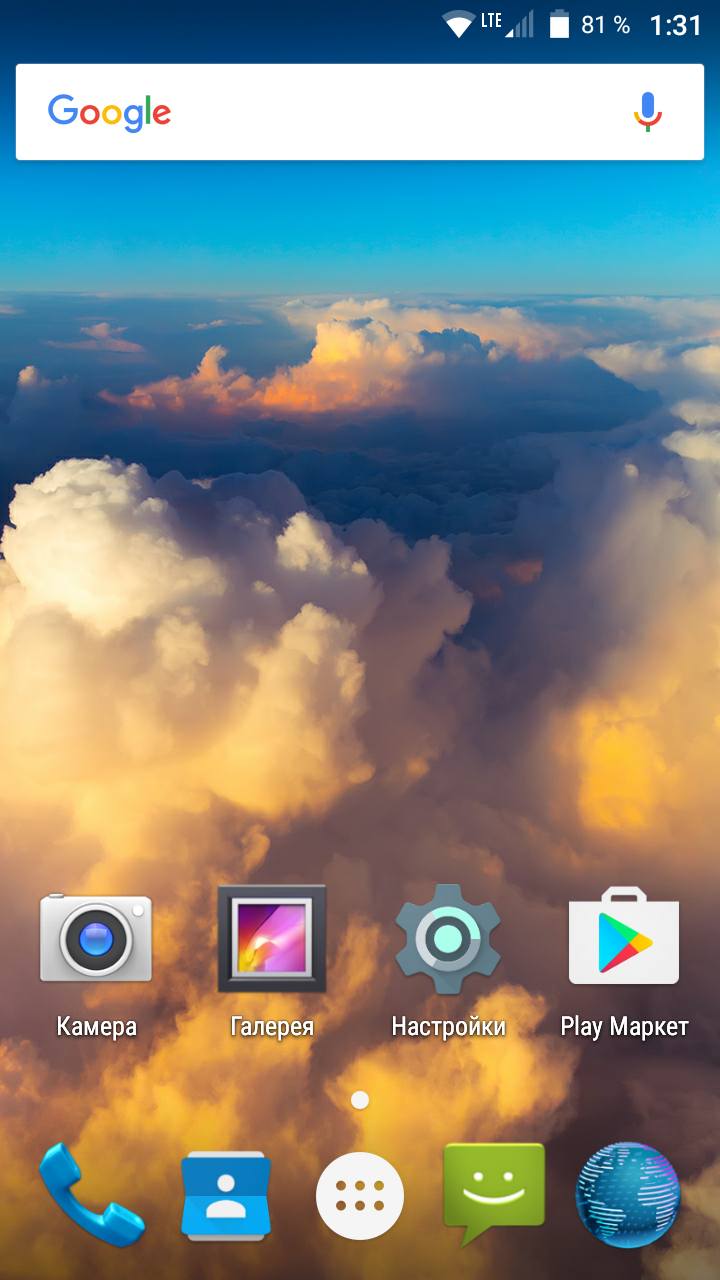 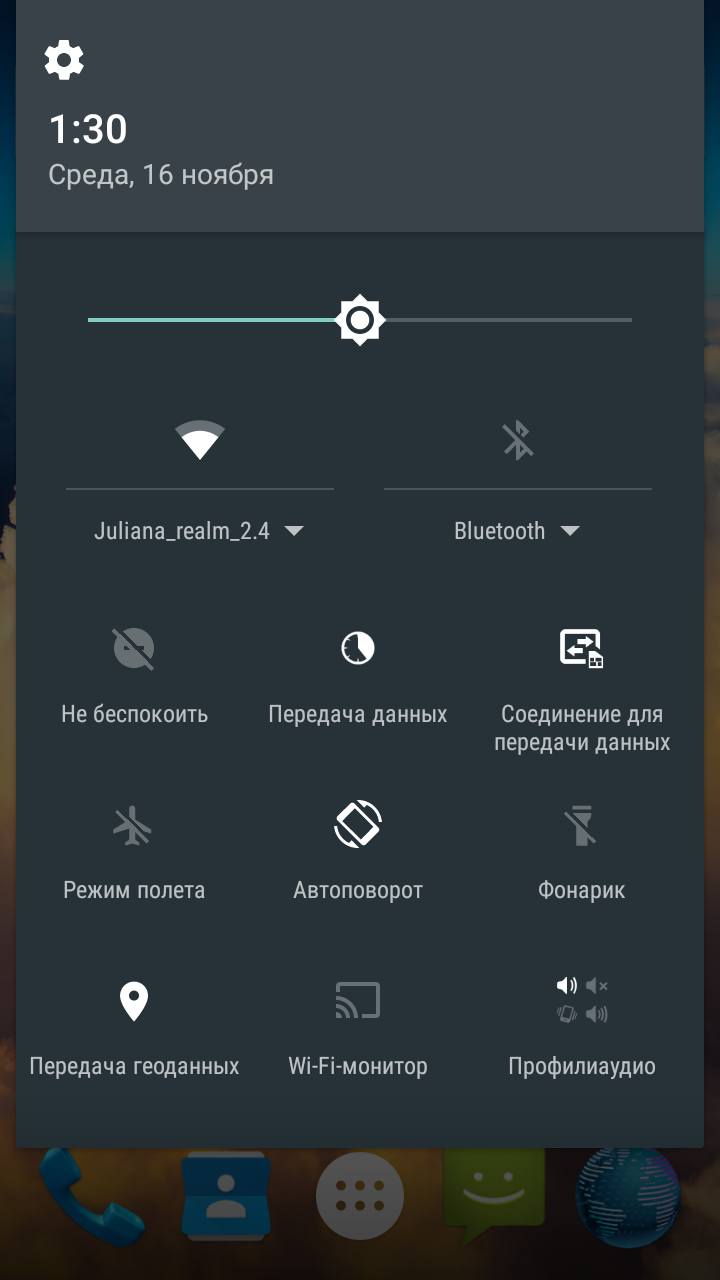 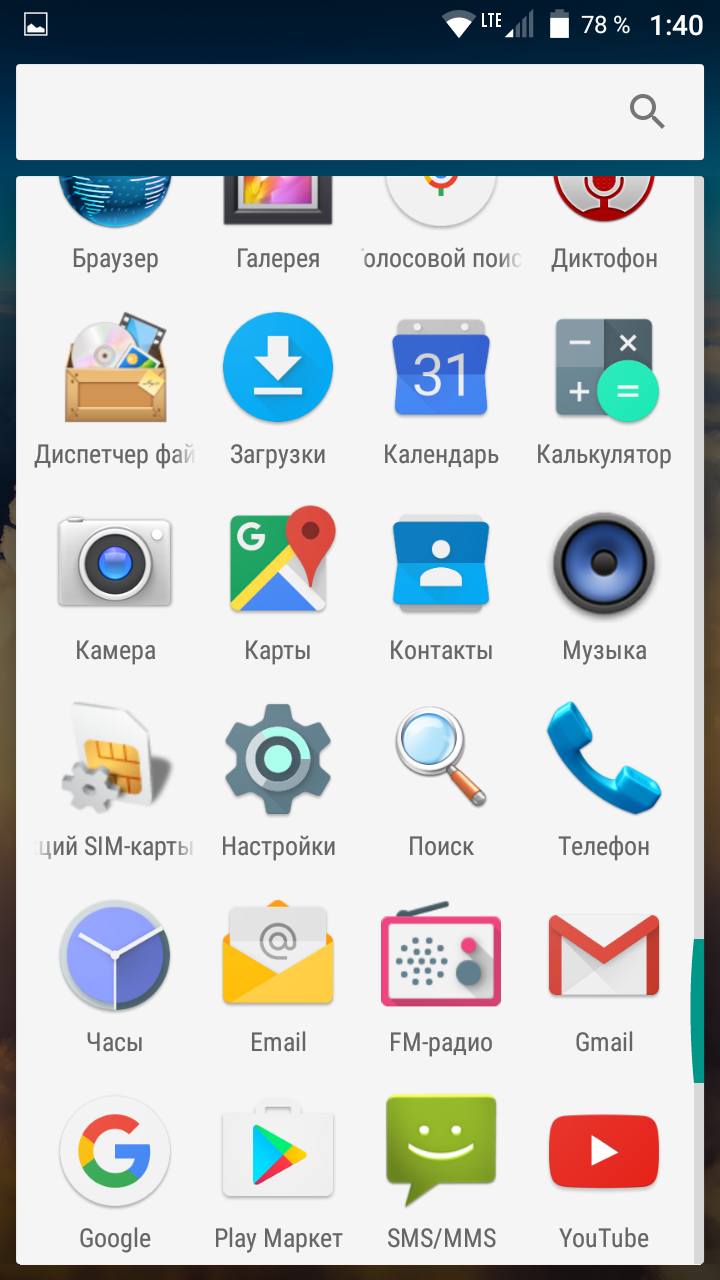 A significant plus of this model is its operating system. It comes without any additional utilities or apps – pure Android 6.0 Marshmallow. 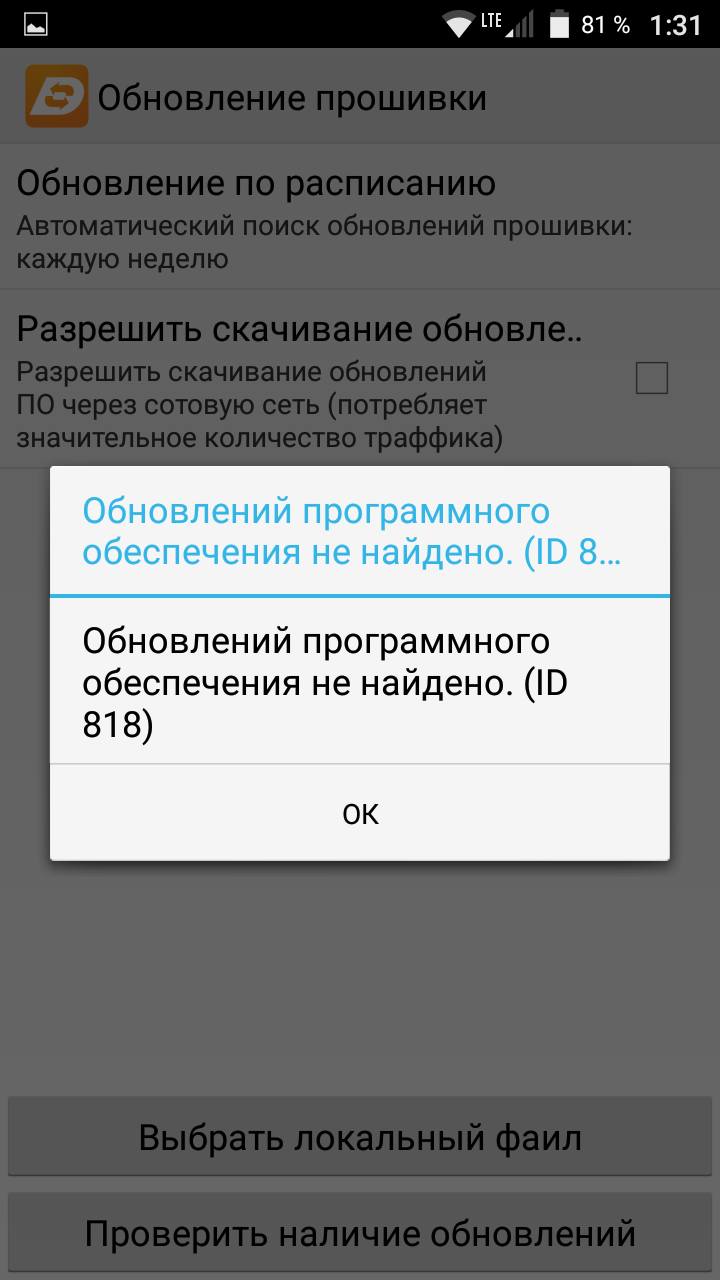 The smartphone supports updating both wirelessly and using firmware files uploaded to the SD card. At the time of the review, no updates to this model have been released yet.

As a conclusion, we note that the processor used in this smartphone provides a very decent performance, at the level of the top smartphones of the year before last, while having good energy efficiency. Thus, the new model of the Digma VOX S503 4G smartphone is a very interesting solution with an attractive price, because not every user can afford to buy expensive smartphones of famous brands. The new model has good features and functions (support for microSD and 4G networks), and also has a neat appearance and a thin body. Overall, this is a great model for its price point.