No more secrets. Official Xbox Series S artwork, as well as pricing and release dates for both Microsoft consoles 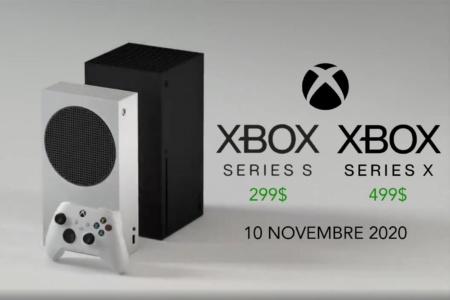 After a huge number of renders and images of varying degrees of reliability, we can finally take a look at what the younger version of Microsoft’s nextgen console, Xbox Series S (Lockhart), is likely to look like. An image published by Thurrott journalist Brad Sams shows the likely final design of the console, as well as its $ 299 price tag.

Update: Well, Microsoft’s reaction to the leaked prices and launch dates for the Xbox Series S and Xbox Series X was not long in coming. The company reacted with a highly original and popular Monkey Puppet meme, thus confirming that the leak was reliable.

Following the comic tweet, Microsoft posted another tweet confirming the design and price of the Xbox Series S. The caption to the console image says “next-generation performance in the smallest Xbox.”

no point holding this back now I guess pic.twitter.com/SgOAjm3BuP

In short, the Xbox Series S is:

Although it is not entirely clear where exactly this image came from, the well-known WalkingCat insider (@ h0x0d), who has repeatedly “leaked” reliable information about Microsoft’s new products, published a short video comparing the younger Xbox Series S in the same design and the older Series X in size.

The image shows a white console that is somewhat similar to the Xbox One S, as well as the design of the Series X showing similarities to the One X. It is shown in vertical orientation, although the inverted Xbox logo clearly indicates that the device can be placed horizontally.

WalkingCat videos show the Series S is much thinner than the Series X, which should make it easier to fit the console under many TVs. There is a circular air vent at the top, just like the One S, but here it is painted black, which serves as an additional accent color.

Insider Jez Corden, editor-in-chief of Windows Central, also confirmed that the console does not have a floppy drive and will indeed sell for a suggested price of $ 299. In addition, the console will be available for purchase as part of the Xbox All Access plan for $ 25 per month, which will also include Xbox Live and Game Pass subscriptions. Meanwhile, the older version of Series X, according to insiders, will cost $ 499 or $ 35 per month by subscription.

According to preliminary data, the Xbox Series S will receive 7.5 GB of available for use RAM, a CPU like the older Series X model, a GPU with a performance of 4 teraflops versus 12 teraflops in Series X and 6 teraflops in One X, as well as support for ray tracing. Despite the less powerful GPU, the Series S as a whole should be head and shoulders above the One X, thanks to a more powerful CPU and faster SSD. That is, the Xbox Series S will handle next-gen games, but the drop in GPU power means that the younger version will likely not be able to output modern games in 4K resolution. By the way, the Xbox One X can handle 4K games, but it won’t be able to run next-gen games at all.

If the $ 299 price tag is correct, which is no doubt about it, then the Xbox Series S could be an affordable and compelling way to join nextgen gaming for anyone who doesn’t care much about 4K. It also makes sense for Microsoft, which is focused on selling Xbox Game Pass subscriptions to the widest possible audience, which also explains the lack of a drive.

Everyone was waiting for the full announcement of the Xbox Series S last month. Judging by the leak, it will take place in the coming days.

According to new reports, both consoles will be released on November 10, 2020.