In our digital age, it is rare, but there are situations when it is necessary to urgently transfer a huge amount of information, and where there is no access to the World Wide Web. And if you want to always, anywhere, have at hand your collection of photographs, drawings, book illustrations? And these are just a few of the many situations when you need a reliable yet portable storage device. With the advancement of technology and the decline in the cost of flash memory, USB drives have become common enough, but models with a large amount of data are still not very common. Until now, external hard drives have been used mainly as such drives, but they have their drawbacks: large size, low reliability, and relative fragility. As a result, external SSDs with a USB interface did not gain widespread popularity, so this, albeit small, market sector needed a reliable and fast USB drive of large, if not huge, capacity. In January of this year, such a product from Kingston was introduced to the market and the general public. The new DataTraveler Ultimate GT USB drives are available in 1 TB and 2 TB models. In fact, they replaced other similar models – the Kingston DataTraveler HyperX Predator 3.0, which were shipped in 512GB and 1TB versions. An important fact should be noted here: besides the increase in volume, the main highlight of Ultimate GT is support for the USB 3.1 Gen 1 standard. This allows you to get a large amount of data and very high read and write speeds. We have at our disposal a 2 TB model DataTraveler Ultimate GT, which we will consider further.

The USB 3.0 standard is the third full version of the Universal Serial Bus (USB), which was later renamed USB 3.1 Gen 1 without changing specifications. This version, like the previous ones, provides ease of use and connectivity without the need for any computer setup, but at the same time it is faster and more optimized for power management. Ideally, USB 3.1 Gen 1 delivers dramatically faster speeds (up to ten times) and, most importantly, multi-streaming. The maximum bandwidth of this version of the standard is up to 5 Gb / s (USB 2.0 – up to 480 Mb / s). But these are the maximum parameters. In reality, the transfer rate depends on the controller and the type of NAND flash used. USB 3.1 Gen 1 drives currently use a variety of architecture and channel options. The more the number of channels (multithreading), the higher the data transfer rate. Accordingly, the most productive models receive very high speeds from 300 MB / s, which is comparable to conventional SSD-drives connected via the SATA interface. It is also worth noting that all devices supporting the USB 3.1 Gen 1 version of the standard are backward compatible, that is, they support previous versions of the standard. All this allows to slightly increase the data transfer speed even for outdated computers. 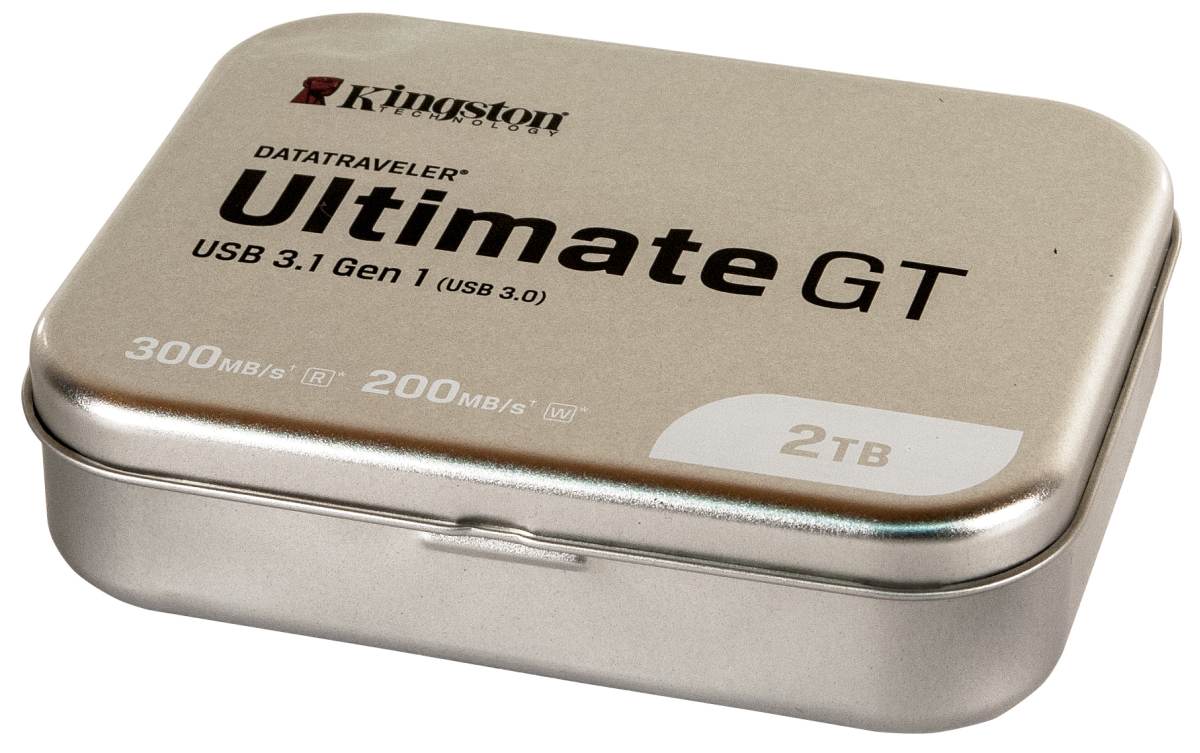 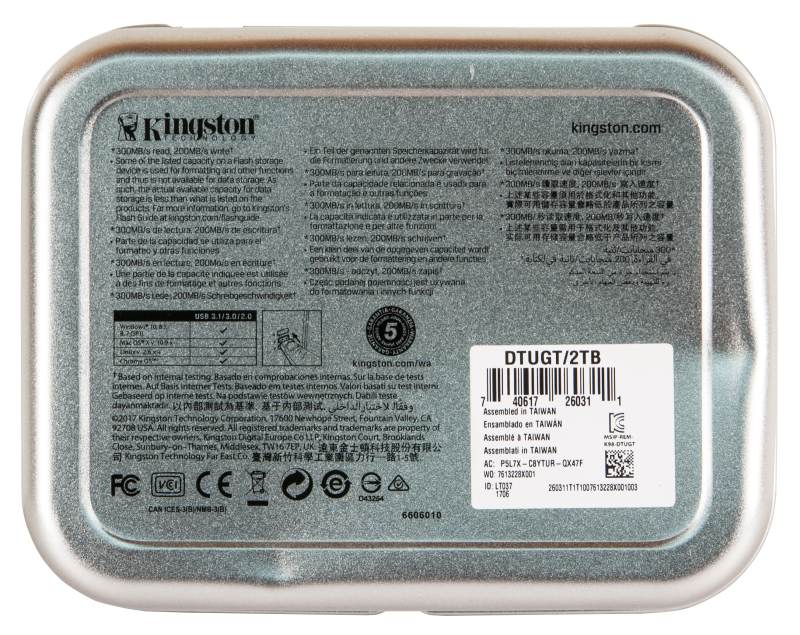 As you know, most generic drives from Kingston and others are marketed in small blisters or cardboard boxes. An exception has been made for the DataTraveler Ultimate GT series, and the USB stick is available in a stylish yet austere tin box. There is nothing superfluous on the front side – the manufacturer, name, device capacity, supported specification and, of course, very impressive speed characteristics are indicated.

On the back of the package, the main features of the drive are indicated Unfortunately, there is no Russian among the several languages ​​in which this is reproduced. In addition, the serial number, country of origin, and the device is backed by Kingston’s 5-year warranty. 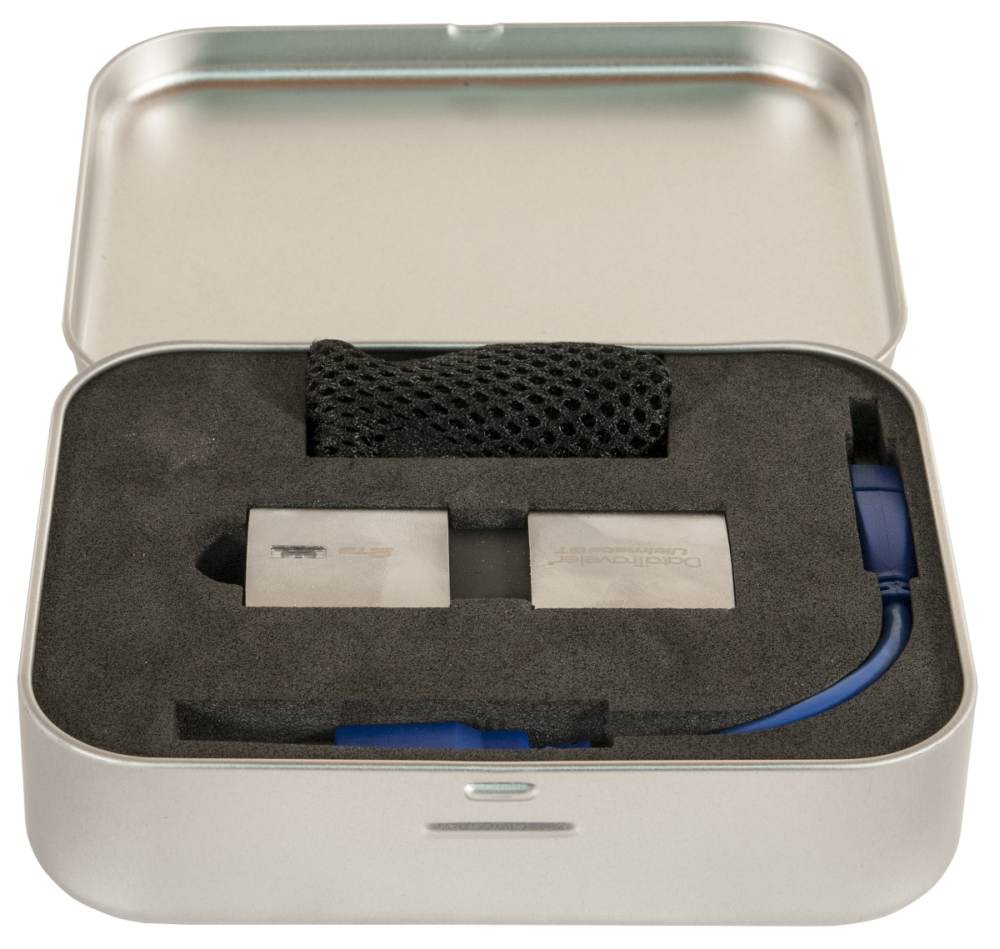 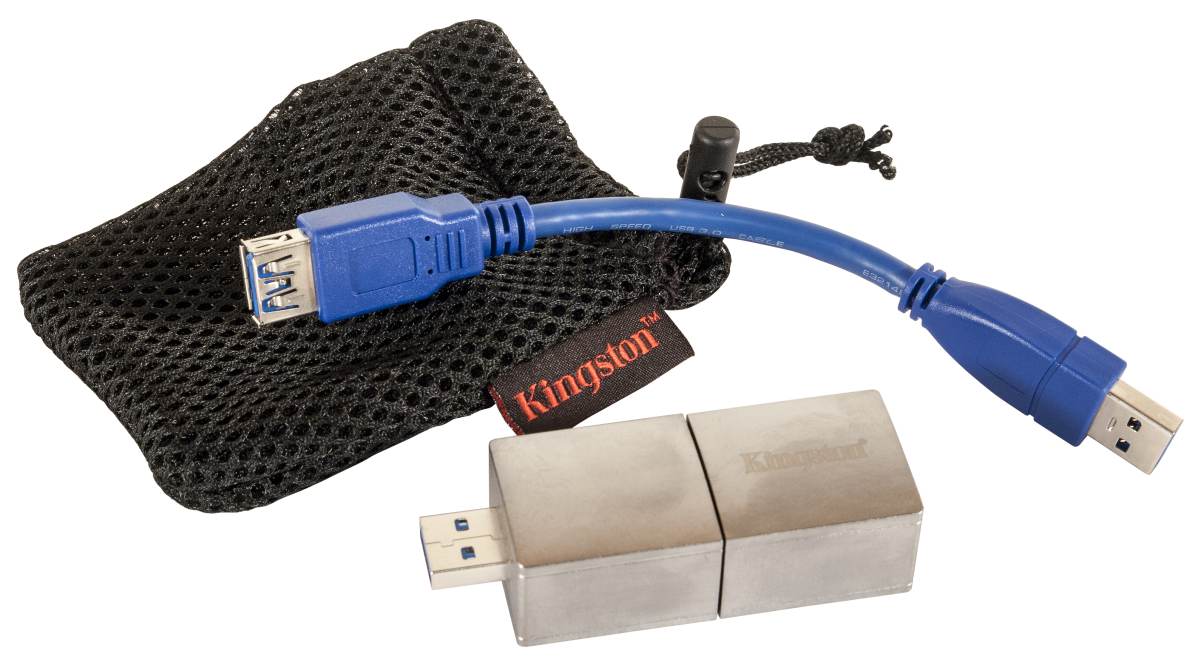 The package bundle does not look impressive, but everything that is needed is attached and stored in separate compartments, cut in a porous material that fills the entire volume of the tin box. Kingston is wise to offer the user a special carry pouch for the USB drive and an extension cable, as the device is so large that in many cases it will not allow access to adjacent ports as the drive will cover them. 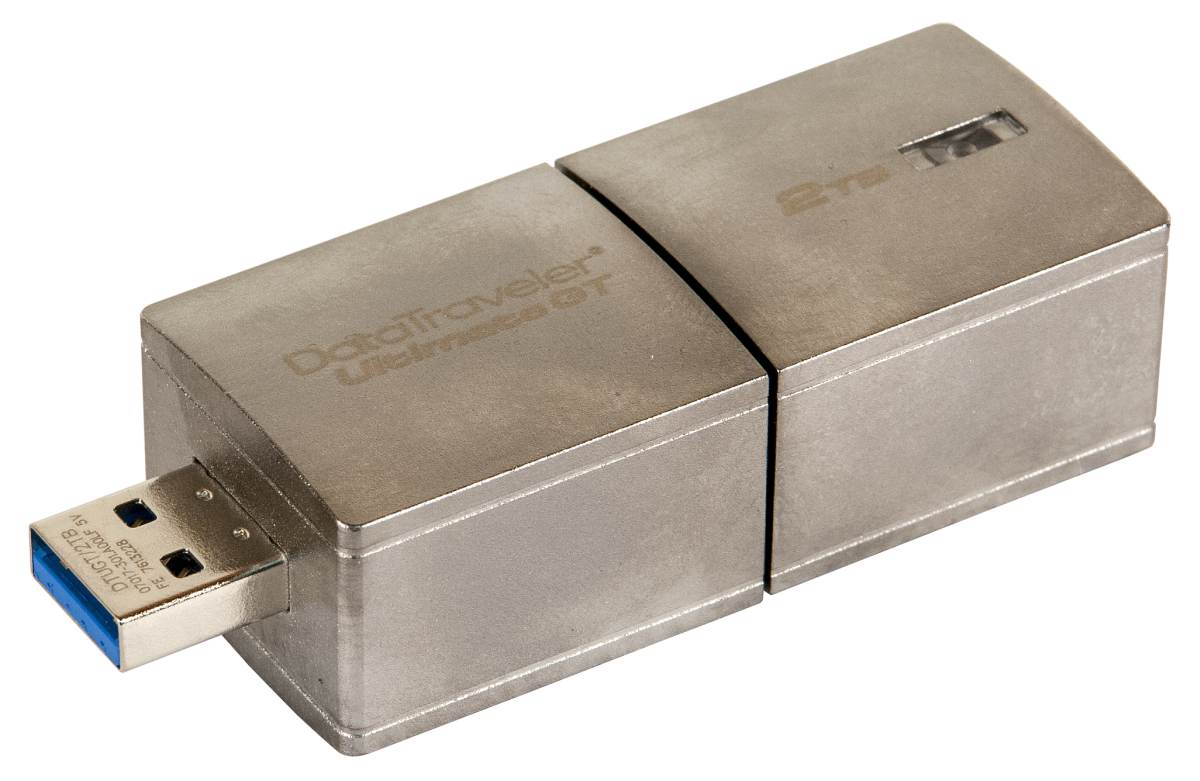 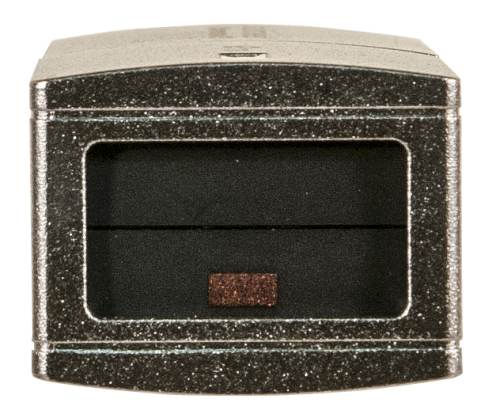 The case itself is made of galvanized metal and has an impact-resistant design that protects this USB drive from almost any adversity in life. In this case, the metal case also plays the role of a heat sink during intensive work with the device. The connector is made in such a way that it can be “recessed” in the body, half of which is made retractable for this. Yes, due to the large volume, the case is not small (relative to traditional small USB drives), but this is good, because with such dimensions, the flash drive is guaranteed not to get lost in your pocket.

The model has a noticeable weight – 60 g, while ordinary flash drives weigh three times less. Its case is quite unusual, and due to the wide sides, its installation may interfere with the use of other USB ports on the back of the PC. In this case, Kingston has equipped its model with an additional USB cable that will allow you to connect the drive to any USB port on your computer.

In order to make sure of the manufacturer’s stated specifications, we conducted a small test of this drive. An OLDI Game 760 computer with the following configuration was used to measure the parameters: 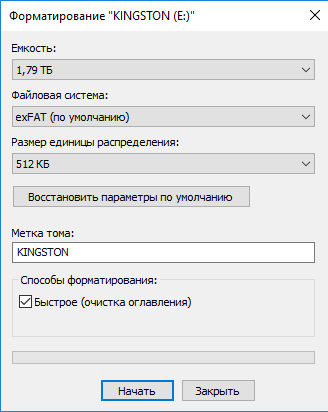 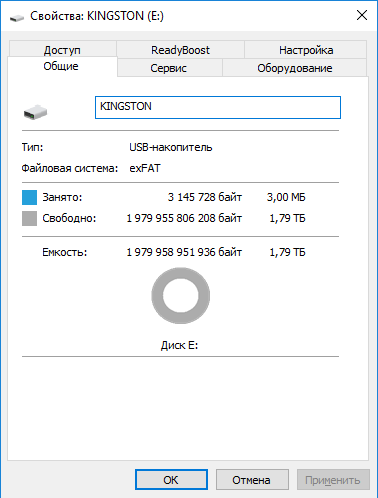 During the tests, the computer was running a 64-bit version of Windows 10, installed on an SSD. The analyzed drive Kingston DataTraveler Ultimate GT 2 Tb was connected to one of the ports (USB 3.1) of the motherboard, and the file system was formatted for the exFAT file system. Note that the drive comes with this particular file system, which supports a large amount of data on one partition. 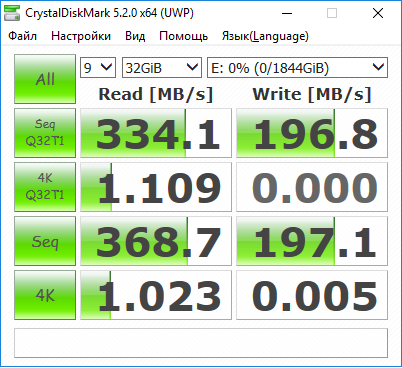 For the synthetic test, we used the well-known utility CrystalDiskMark, which is used to measure the performance of various drives. The test results generally coincide with the declared ones, except for the read mode, in which the speed was about 334 MB / s against the declared 300 MB / s. This is even more than one might expect.

In addition, in order to fully ensure the correctness of the results obtained, in parallel with CrystalMark, we conducted tests using the FlashTest 4.0 utility developed by our test laboratory, with which, in our opinion, you can get data close to real operating conditions. This program, using function calls from the WinAPI library, copies data using standard Windows 7 and 8 tools, including displaying a standard window with a progress indicator on the screen. The test consists in first copying a test set of files from the PC hard drive to an external drive, during which the write speed is measured, and then in the opposite direction to measure the read speed. The test data package for testing includes several hundred files of different sizes with a total volume of 17.87 GB located in different folders.

Each of the tests was run three times, and the computer was rebooted before the next launch, which eliminates the impact of data caching on the measurement results. Also, the Prefetch and Superfetch functions of the Windows operating system were forcibly (via registry settings) blocked.

According to the FlashTest 4.0 test results, the average data transfer rate during copying from a memory card to a PC, that is, in read mode, was 190.2 MB / s; in the opposite direction (recording mode) – 96.2 MB / s. So everything fell into place, since tests that are close to real operating conditions often show slightly different figures than synthetic ones. Nevertheless, the results obtained can be assessed as very good.

The use of USB 3.1 Gen 1 allows the Kingston DataTraveler Ultimate GT 2 Tb USB Flash Drive to deliver impressive performance with ease of connection and customization. In other words, Kingston has released a device that is really useful and necessary, and in some cases even irreplaceable. This drive is more than suitable as a portable hard drive for storing archives and transferring large files. Therefore, you should carefully consider the device offered by Kingston, which will surely find its buyer. Unfortunately, the price for this drive in Russia is still unknown, but according to Amazon’s marketplace, it is approximately $ 1,500.