ASUS has a long history of launching a series of products aimed at consumers who love to play PC games. ROG (Republic Of Gamers) series products are not limited to motherboards, desktops and video cards, as ASUS produces almost the entire range of products that gamers need. In 2015, a rigid base gaming keyboard with Cherry MX keys was announced, which is able to withstand any test of a difficult gamer’s fate. But game lovers had to wait another year in order not only to hold, but also to purchase for use this most interesting creation of the company’s designers – ASUS ROG Claymore. It got its name from a Scottish two-handed sword dating back to the late Middle Ages and originally called the “claidheamh-Mor”, or simply the Great Sword. It acquired its current name “Claymore” later – in the late 18th – early 19th centuries. It is not by chance that the keyboard got this name, since the key word here is “two-handed”. ASUS ROG Claymore is divided into two parts by the designers, which allows the digital section to be fastened to both the left and right of the main unit. In other words, both hands of the player with this keyboard will be used most productively. 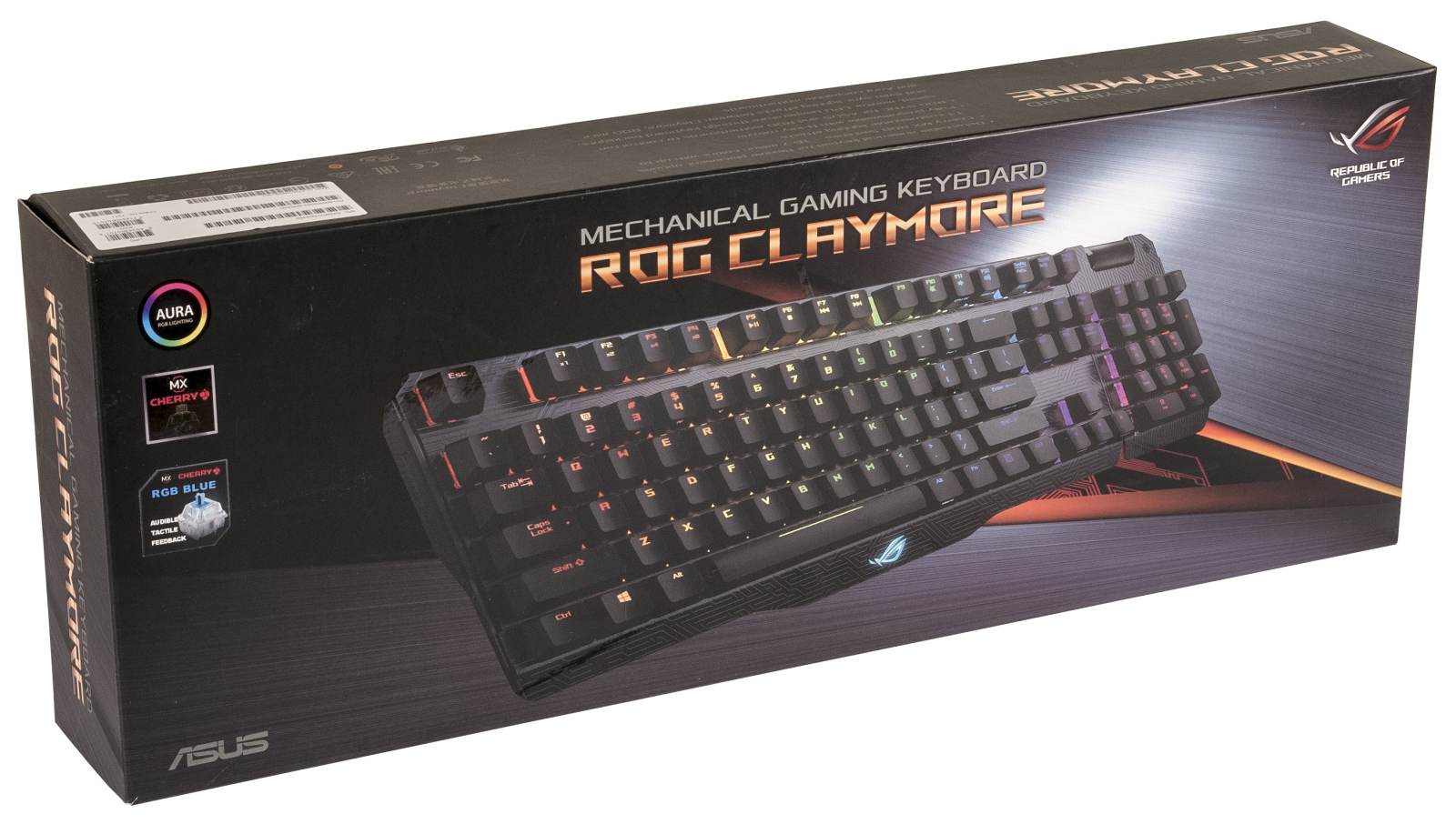 The keyboard comes in a large and beautiful box, finished in dark colors, which are always so popular among players traveling through dungeons in search of enemies. The front side of the box shows the keyboard itself, above which its name is not only highlighted – ROG CLAYMORE, but also it is emphasized that it is mechanical and is intended primarily for fans of computer games. The fact that it is for players is also indicated by the Republic Of Gamers icon in the upper right corner. But the most interesting thing is that it uses Cherry MX keys. In our case, these are Cherry MX RGB BLUE, that is, keys with full backlighting. Actually, this type of key was designed for those who type a lot and often, but like the Black type (for professional players) or the Brown type (universal), it also perfectly copes with any difficulties that gamers have.

The CHERRY company was founded back in 1953 in the basement of an Illinois restaurant and specializes in the production of keys for various devices, as well as all kinds of switches, not only for the end user, but also for industrial use. But it wasn’t until the mid-1970s that it established its first industrial line for computer keys. In 2008, the company was bought by the German ZF Friedrichshafen AG, where its main production facilities are now located. The mechanism of the now famous Cherry MX series keys was patented in mid-1983. Since then, it has remained practically unchanged, showing itself to be very convenient and reliable. The contact pads in these keys are always manufactured with a matrix gold plating, which guarantees a huge number of actuations, and therefore high reliability.

Some of the main differences between this product and standard keyboards are indicated on the back of the packaging box. Unfortunately, there is no Russian translation. But the main thing can still be understood without translation. These differences include: ASUS ROG-style embossed aluminum case; an additional FN key, which is urgently needed for many additional functions; the ability to record macros “on the fly”; metal roller for quick sound adjustment; the ability to synchronize the operation of the backlight with other devices in the ROG series. Among the main technical characteristics indicated here, it should be noted that the keypad polling frequency is 1000 Hz, and it is also possible to program all keys.

The unpacking process and the contents of the box can be seen in detail on our YouTube channel. 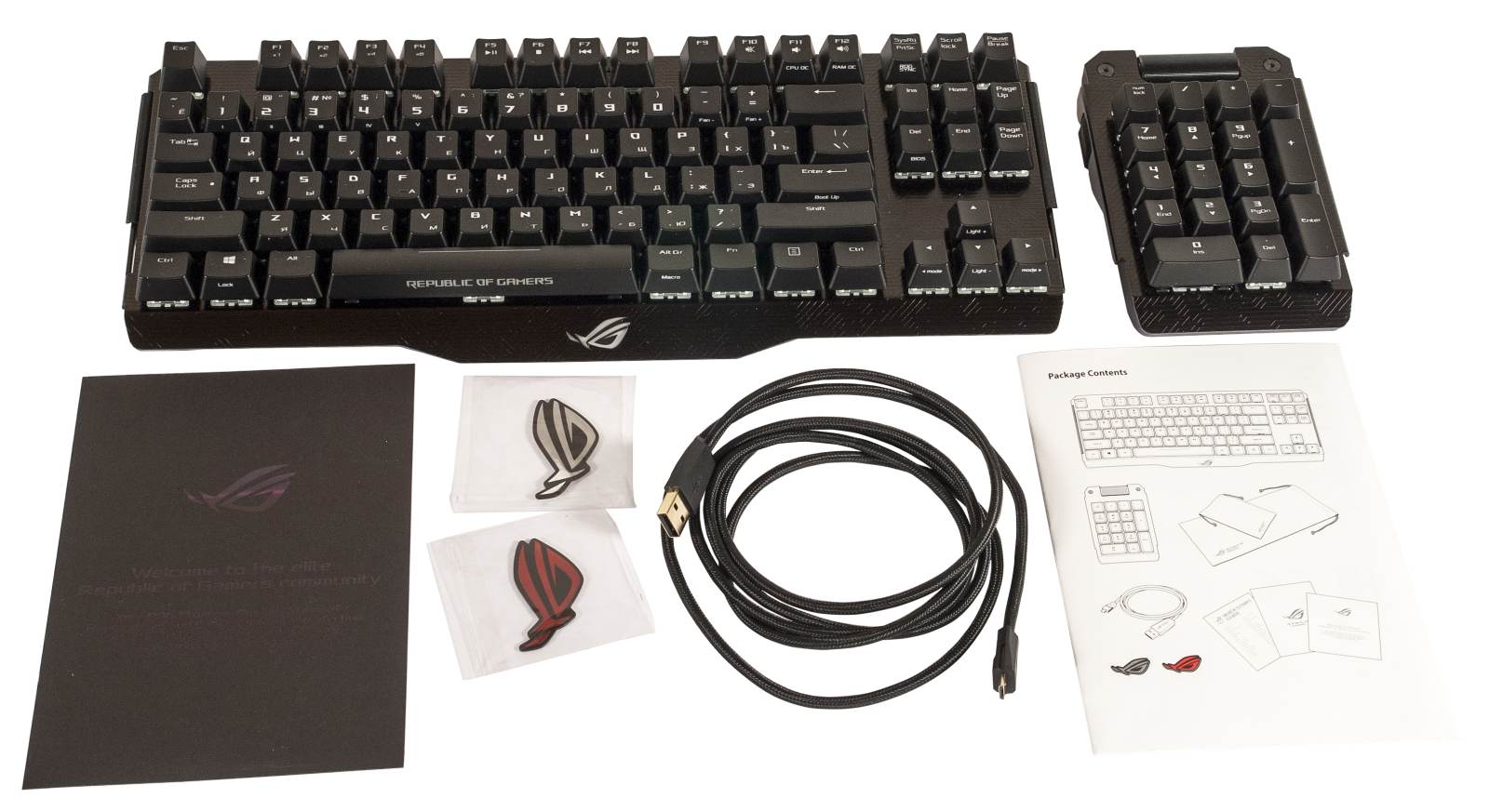 In addition to the basic and numeric parts of the keyboard, the package includes: an advertising card, a pair of stickers with the ROG symbol, a proprietary USB cable (USB-microUSB) in a silk braid with a length of 1.8 m for connecting to a computer and a brief instruction, which indicates the equipment product and the Internet address from which you need to download the software to fully work with ROG CLAYMORE. 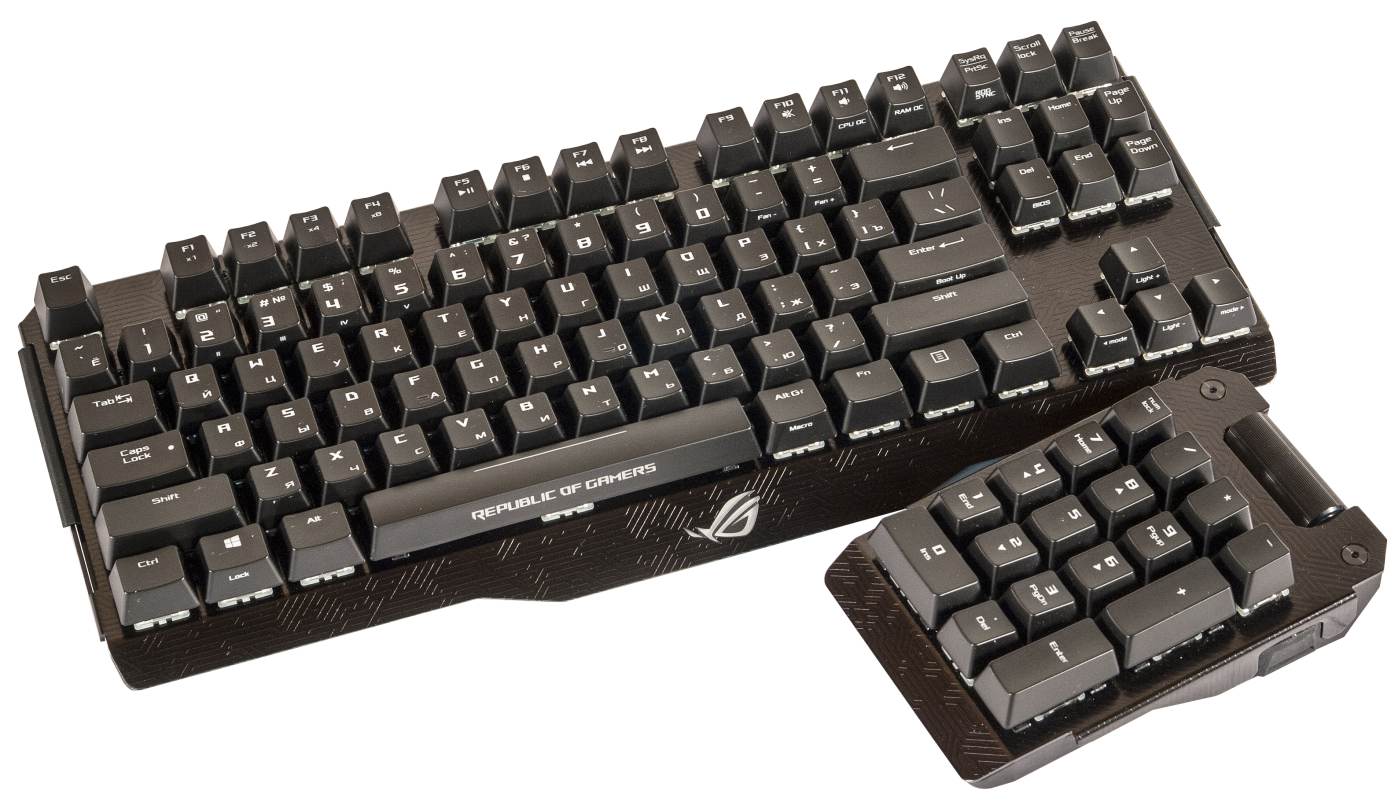 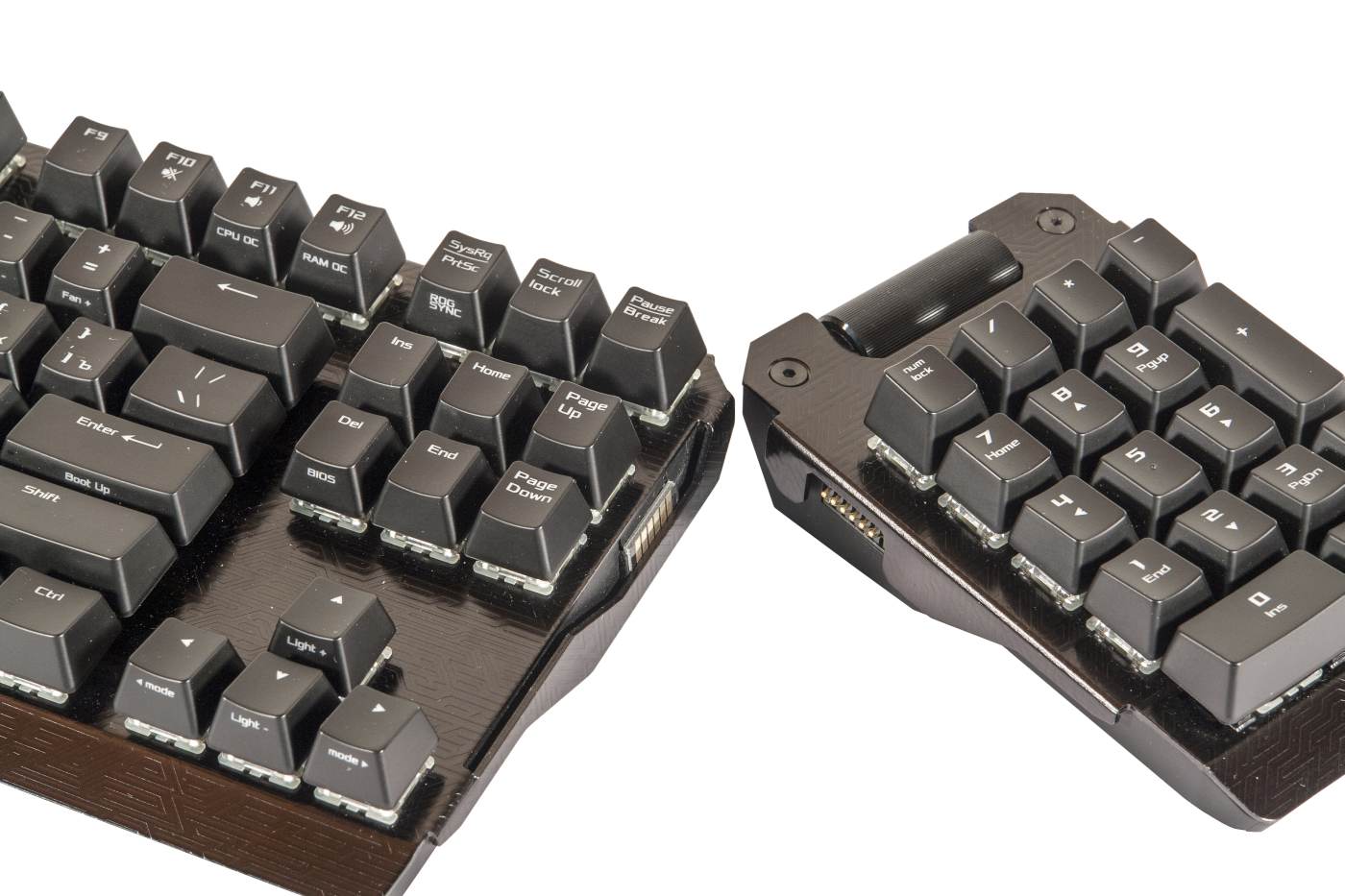 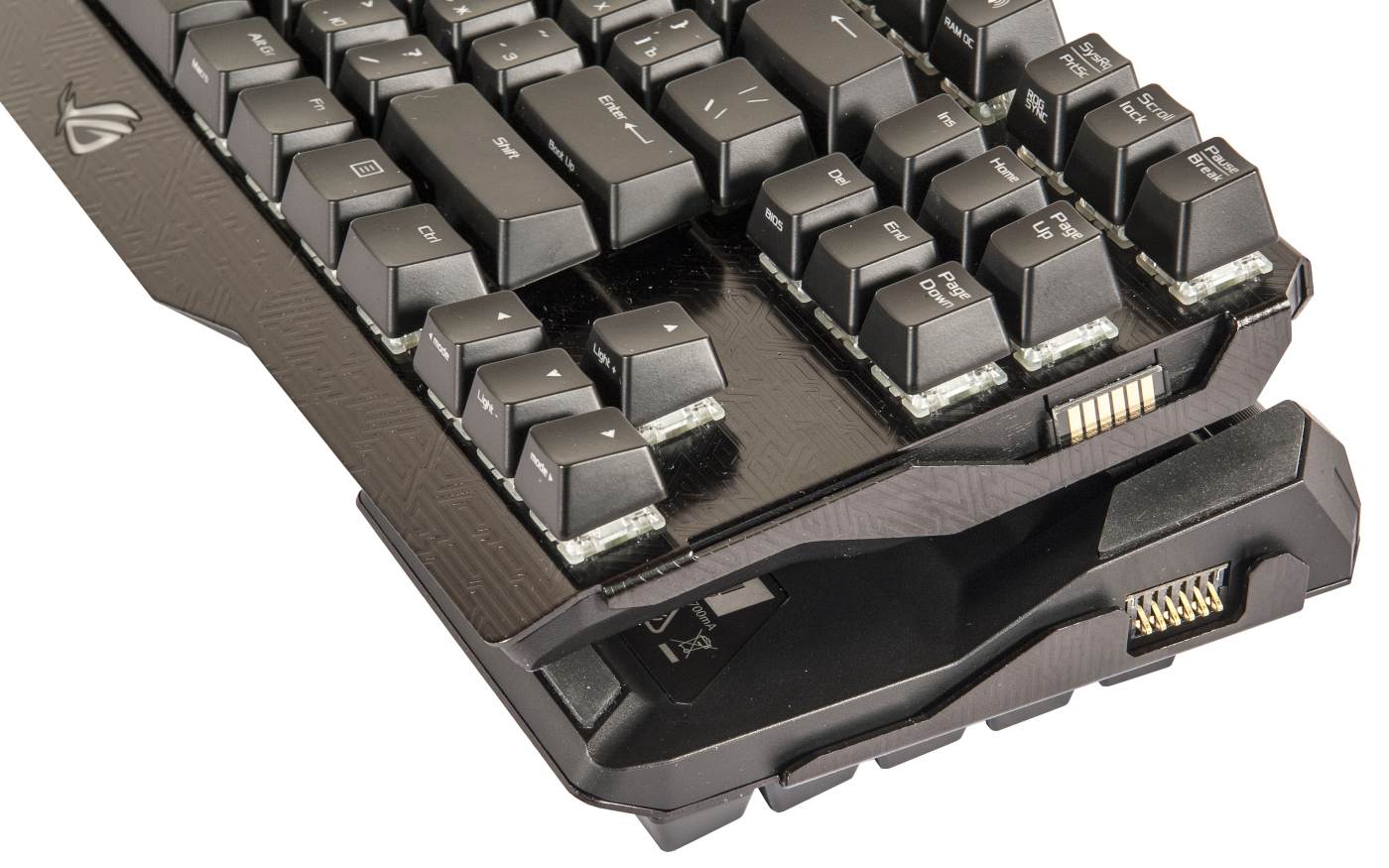 The first thing that immediately catches your eye is one of the main features of the ASUS ROG CLAYMORE keyboard – a detachable digital part, which, if desired and necessary, can be attached both to the left and to the right. For this, special contacts are placed on the sides of the parts (for reliability, they are gilded and closed with a rubber cover). 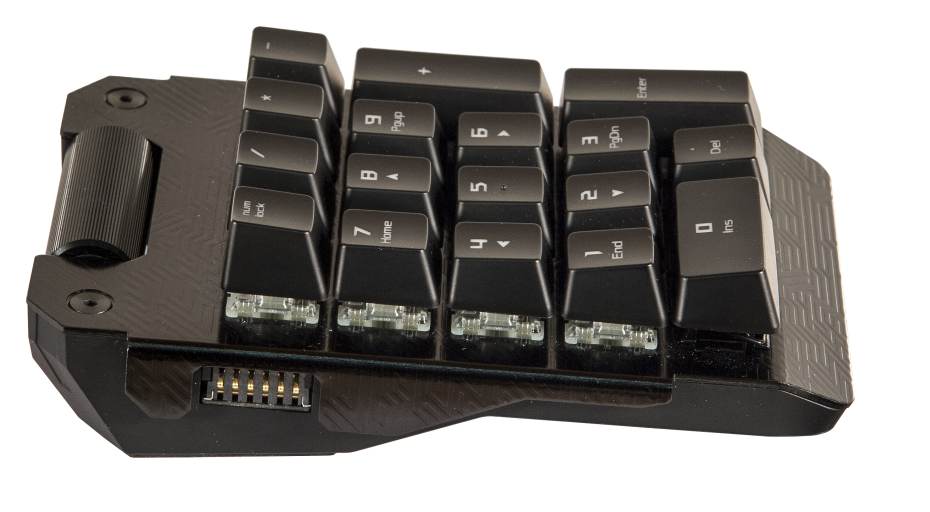 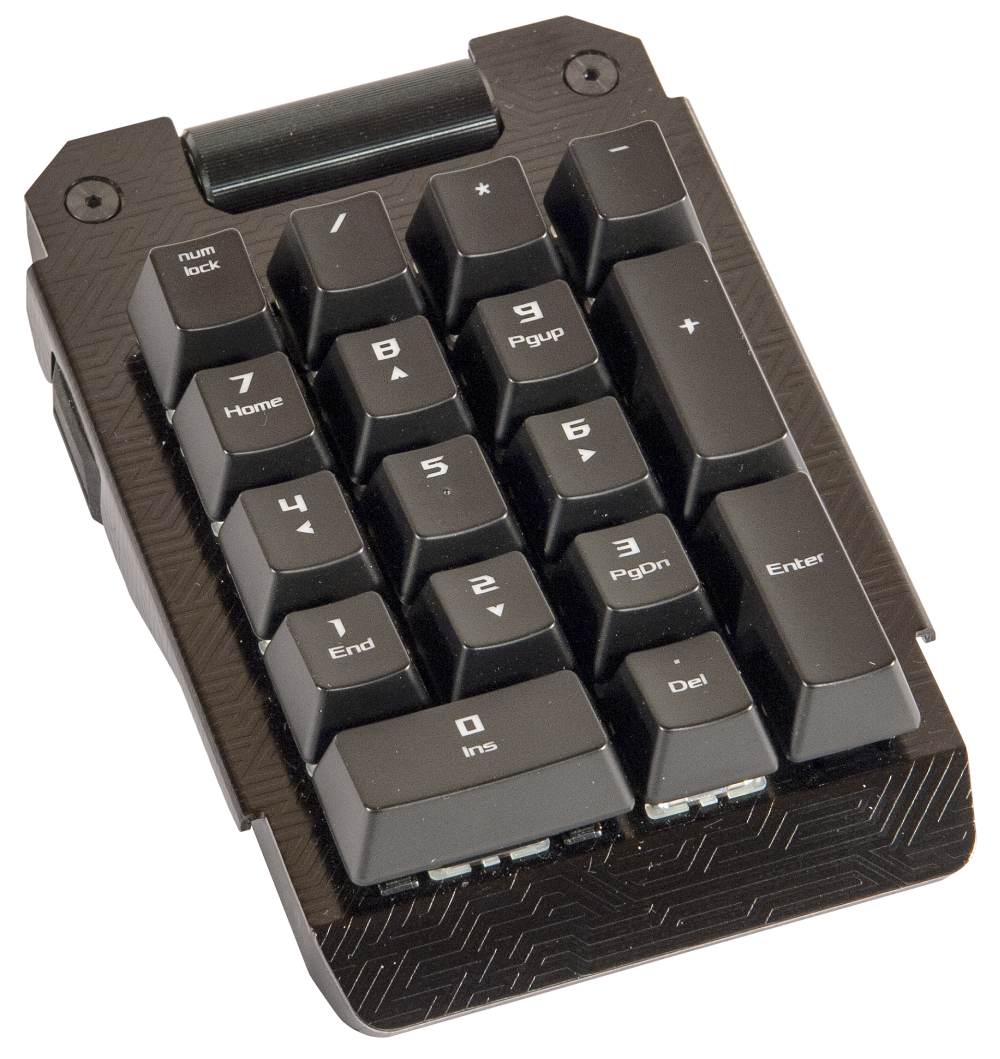 As you can see, the numeric part of the keyboard is somewhat unusual. The place, which is usually occupied by the auxiliary keys, is occupied by a heavy ribbed metal roller with a built-in button, which serves to quickly adjust the volume level. This is a very interesting and unusual solution for keyboards, however, for those who initially did not like it, ASUS is releasing a keyboard model without such a clip.

The upper side, which holds the brunt of gamers’ keystrokes, is made from decently thick sheet aluminum. It is embossed in the Mayan style, which, however, only increases the strength characteristics of this part. And of course, “Republic Of Gamers” is written on the “space” key, so that even in the heat of battle, the user does not forget that this is just a game. 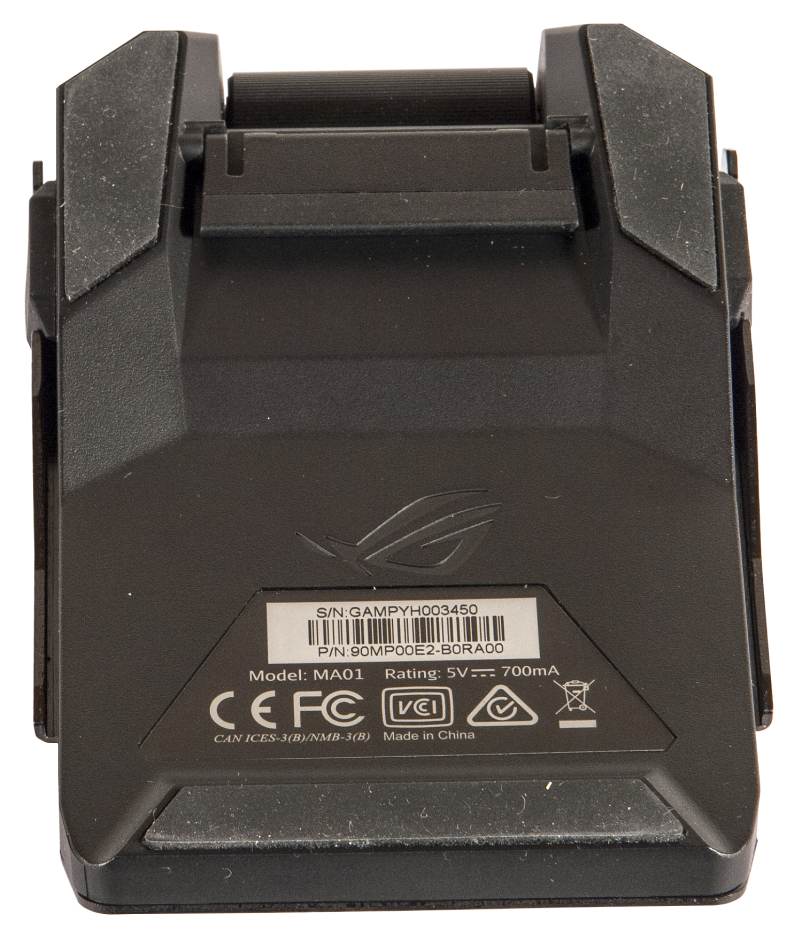 The reverse side of both parts is made in an angular style. It also contains the printed data on the country of origin and the serial number. This should not be overlooked as all critical components are made in Germany. Both parts of the keyboard have large rubberized feet, which prevent slipping even on glass surfaces. An additional angle of inclination relative to the table is provided by folding legs, the ends of which are also made of dense rubberized material.

In the middle part of the rear side of the main keyboard unit there is a USB connector recessed into the case for connecting to a computer. This prevents the cable from rubbing against the keyboard case.

The ASUS ROG Claymore keyboard uses N-Key Rollover technology to provide a “kick-ass gaming” experience, which can handle an unlimited number of simultaneous clicks. In addition, using the software offered by the company, using hot keys, you can control the cooling system and overclocking of some models of ROG motherboards.

The keyboard features an Aura LED backlighting system capable of displaying over 16 million colors. Using the included software, you can choose between eight preset effects, or customize the Aura system to your liking, which is even better, since you can do this not only for the entire keyboard as a whole, but also for a specific key zone (for example, for the navigation keys ).

Customization is not limited to a single profile. Different games require personalization. And ASUS in its ROG Claymore keyboard offers gamers the ability to store up to six Quick Setup profiles (five custom and one default). This is helped by the ASUS ROG Armory utility. She is also responsible for programming macros. 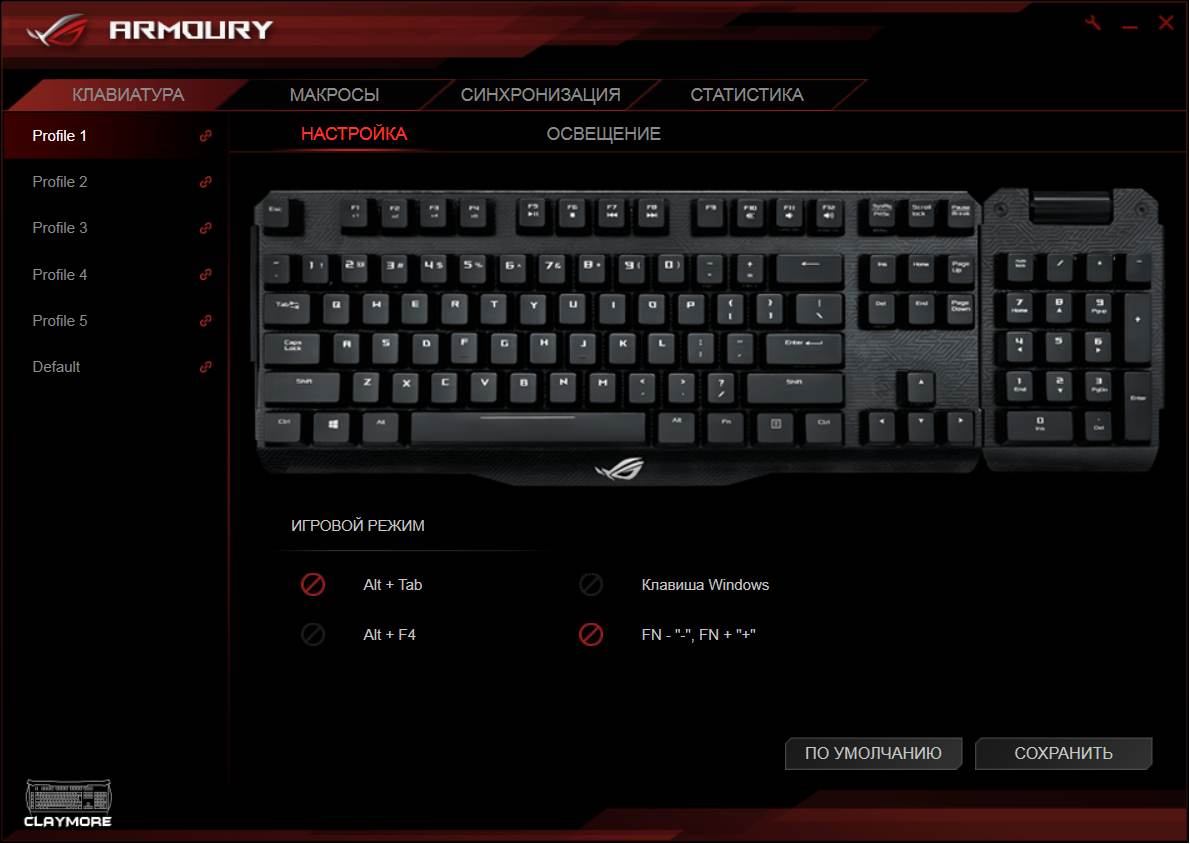 ASUS Armory branded software must be downloaded from ASUS official website. Without this utility, which, incidentally, is the same for several RoG devices (as the name “Armory” hints at), it is impossible to fine-tune the keyboard and backlight timing. The utility has been translated into many languages ​​of the world, including Russian, so no language problems should arise. In order not to forget your personal settings for certain types of work, whether it be playing, programming or just typing, they can be easily saved. For this, the editing and import / export mode of the created profile is used. This mode is also convenient when several family members use the computer. In such a situation, each of them will be able to have their own personal user keyboard profile. For gamers, this mode is no less relevant, because by saving the settings that fit into the memory of the keyboard itself, you can always take your favorite profile with you if you have to play on a similar keyboard, but, for example, at a party or at a competition. 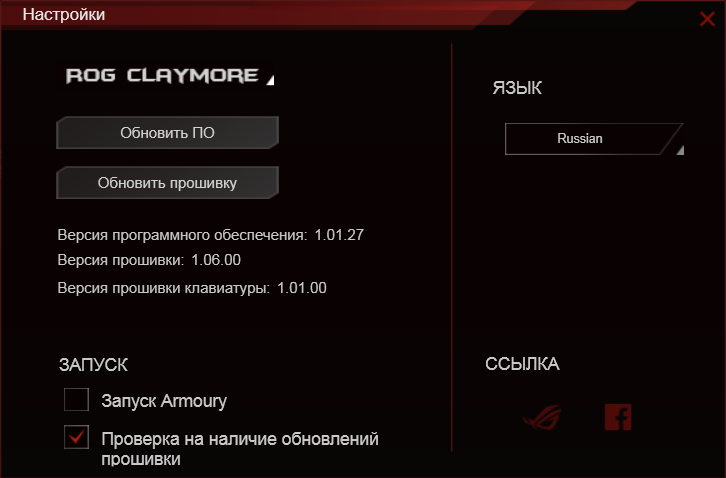 It is advisable to download the software immediately after purchase, since the keyboard, like many modern gadgets, can be updated using this utility. 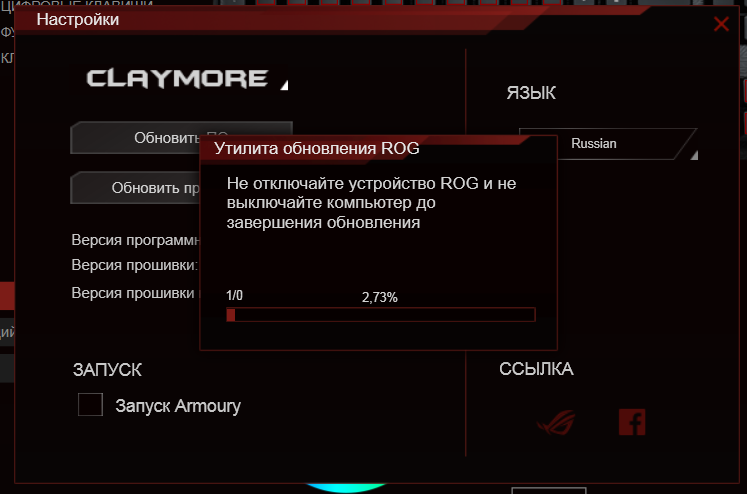 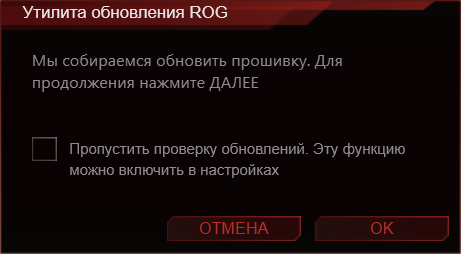 The update applies not only to the ASUS Armory software, but also to the keyboard firmware. At the very beginning of the installation, a warning will be displayed stating that you should not disconnect the USB cable or turn off the computer at the time of the firmware. This requirement is extremely stringent, since otherwise a software installation failure will occur, which can lead to unpredictable consequences (at this moment, the program automatically updates the internal software of the keyboard.) It should be noted that the update should be done immediately after installing the software, since on the site with a high degree of probability is an old version of the software. Anyway, backlight sync capabilities only appear after updating the keyboard and ASUS Armory to the latest version. 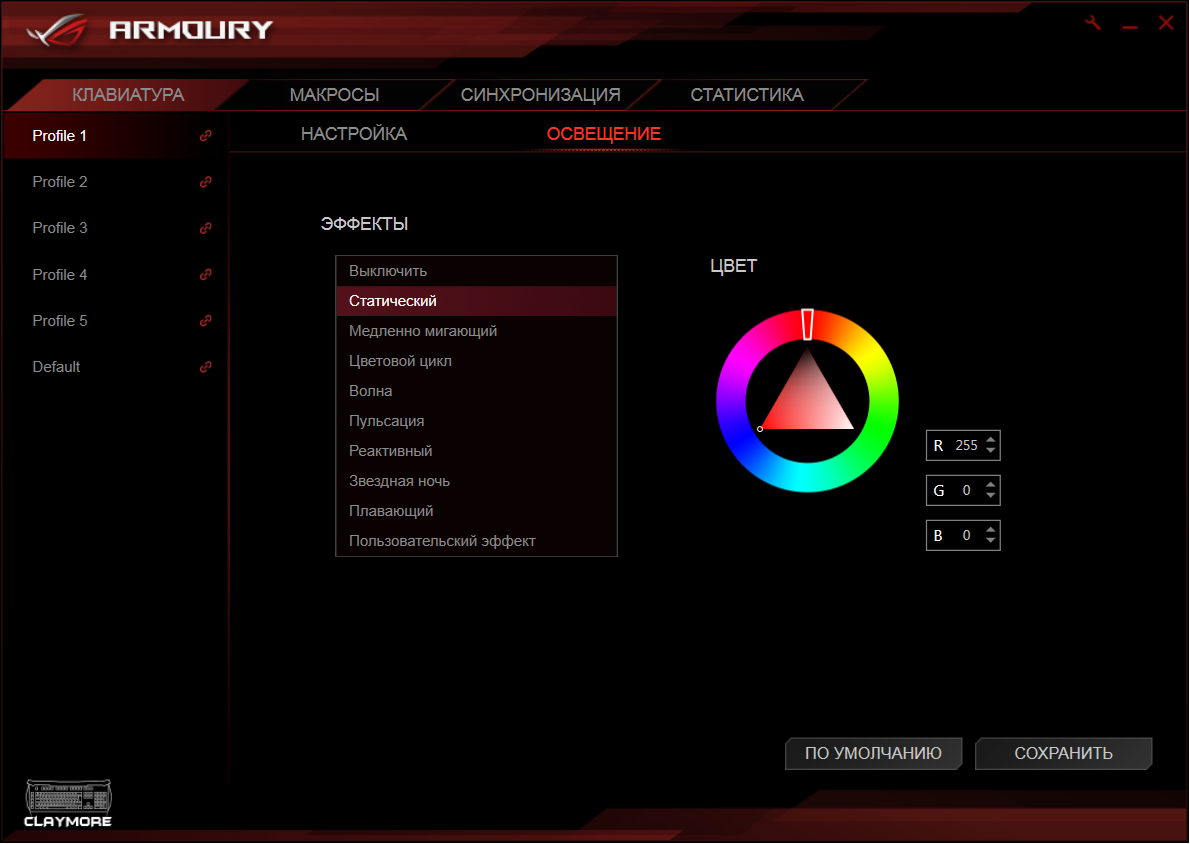 The backlight setting is quite varied. The user has several different preset options for light indication. All options apply to all keys of the device at once, but, if desired, the user can customize individual blocks. 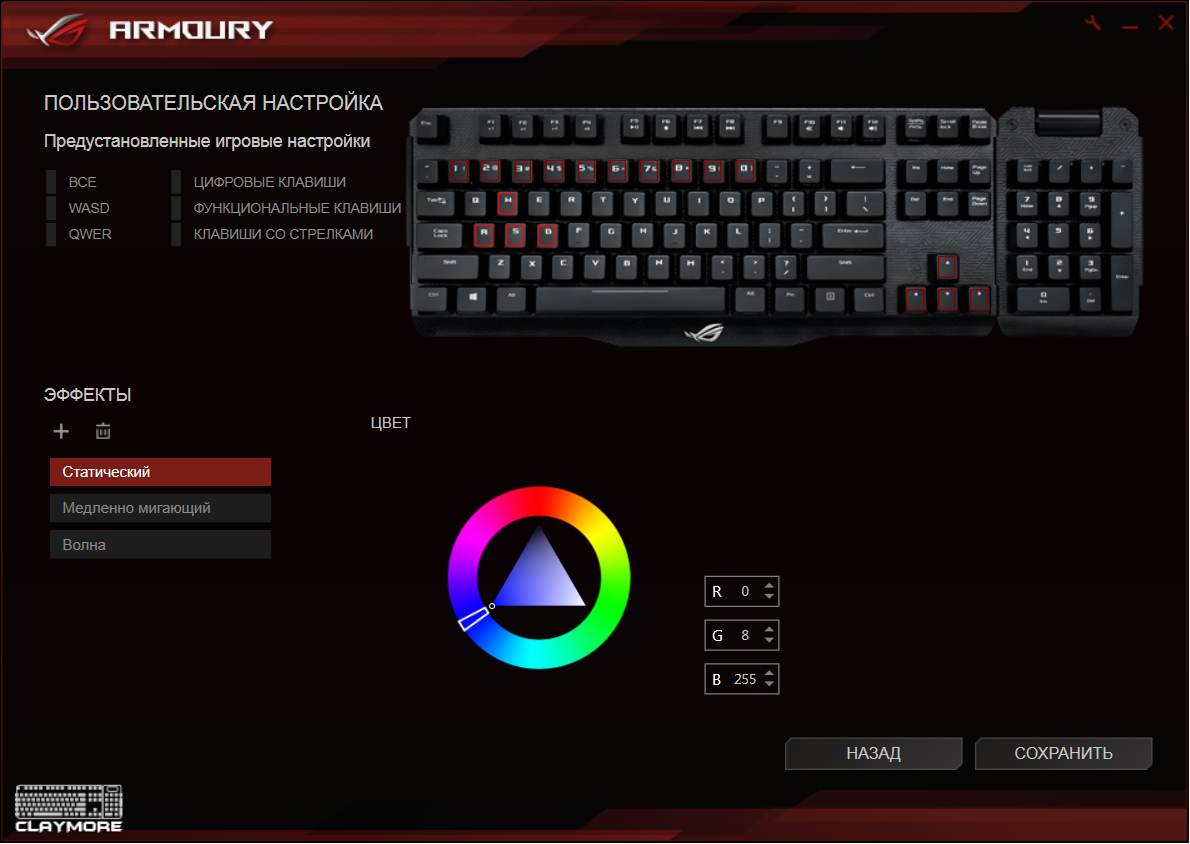 The custom backlight setting assumes the choice of the type of light indication for six key blocks: WASD, QWER, F1-F12, arrows, a numeric block on the main part of the keyboard and all keys at once.

More details can be seen on our channel:

For each block, the type of illumination can be set individually, but there is a possibility of combining. If you use all the blocks, this coloring looks very unusual. 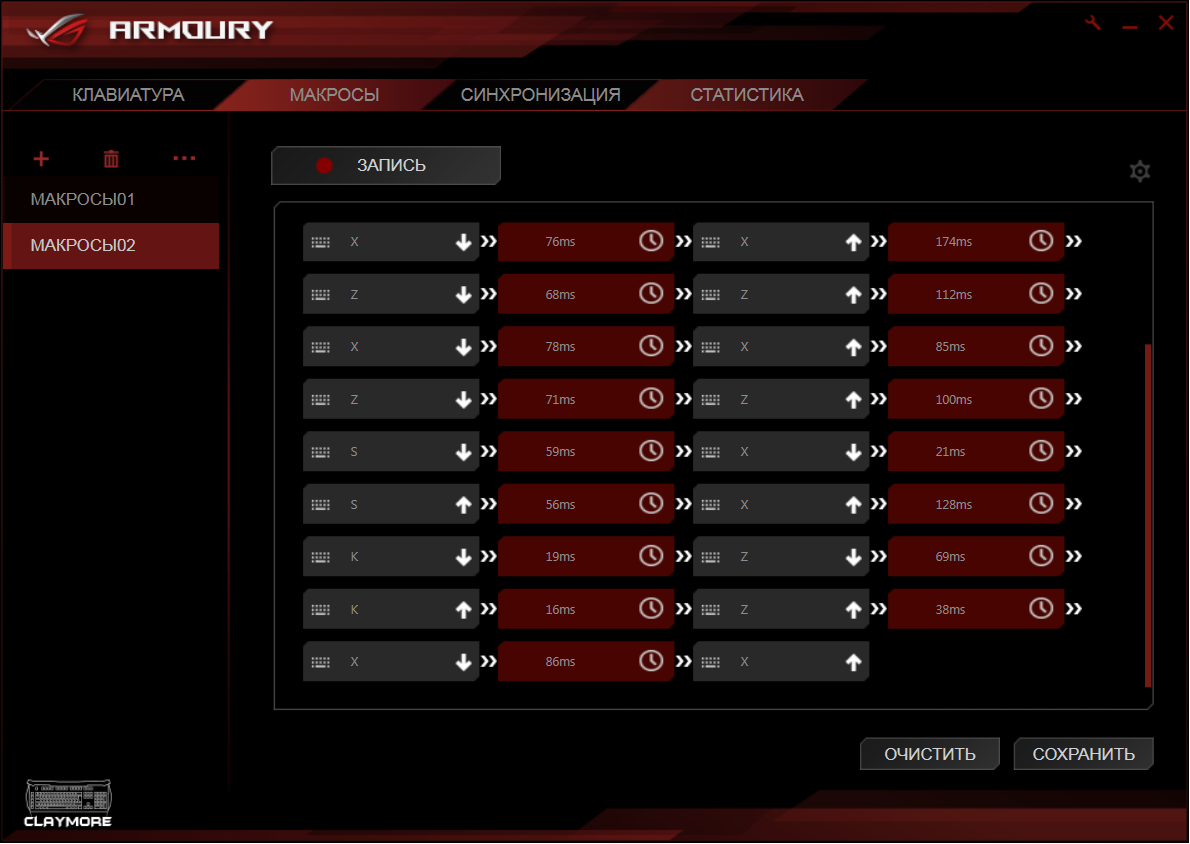 A separate window allows you to configure buttons for working with macros. For the avid gamer, this is one of the most important tasks. Interestingly, in addition to the very algorithm of pressing the buttons, the time of pressing each of them is also recorded. This allows you to fine-tune the macro for specific actions. 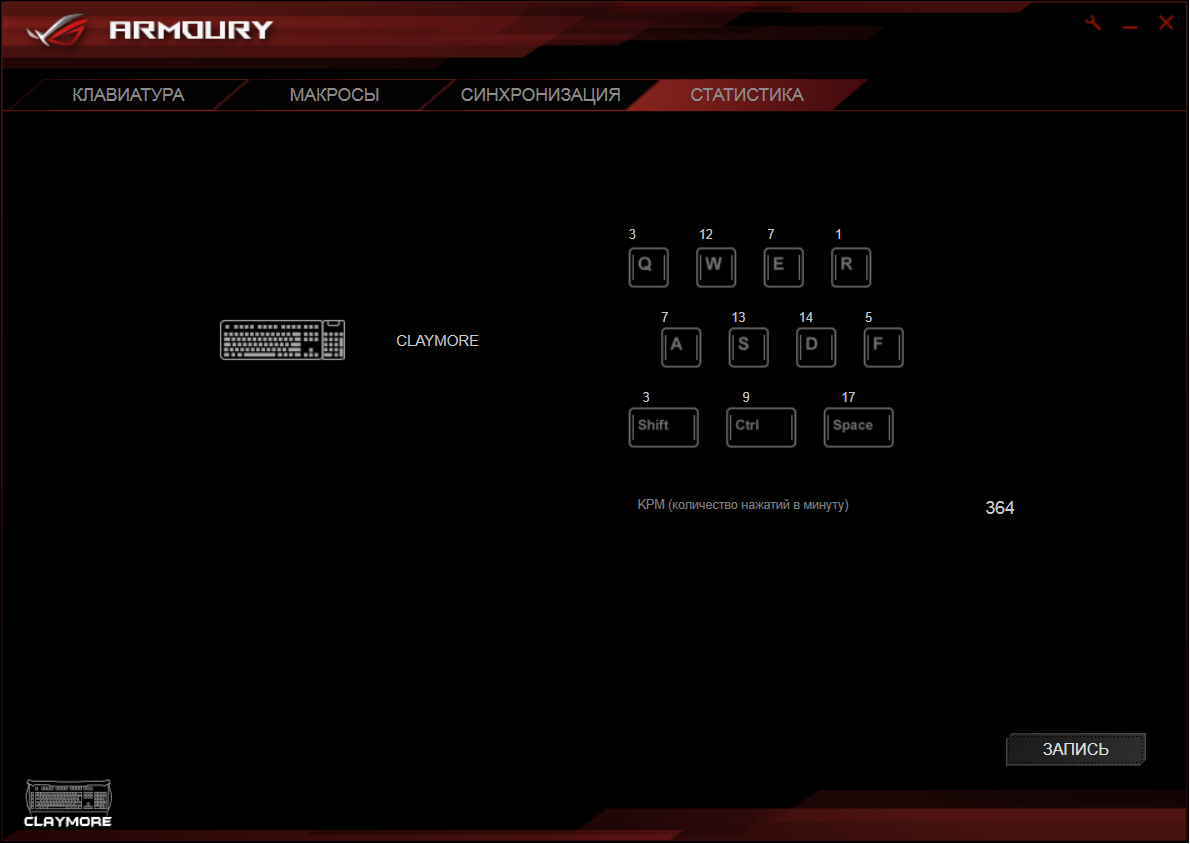 Another window contains statistics of keystrokes. By default, statistics are disabled, and click recording is enabled using a separate button. At the same time, it is rather strange that statistics concern only a certain set of keys. 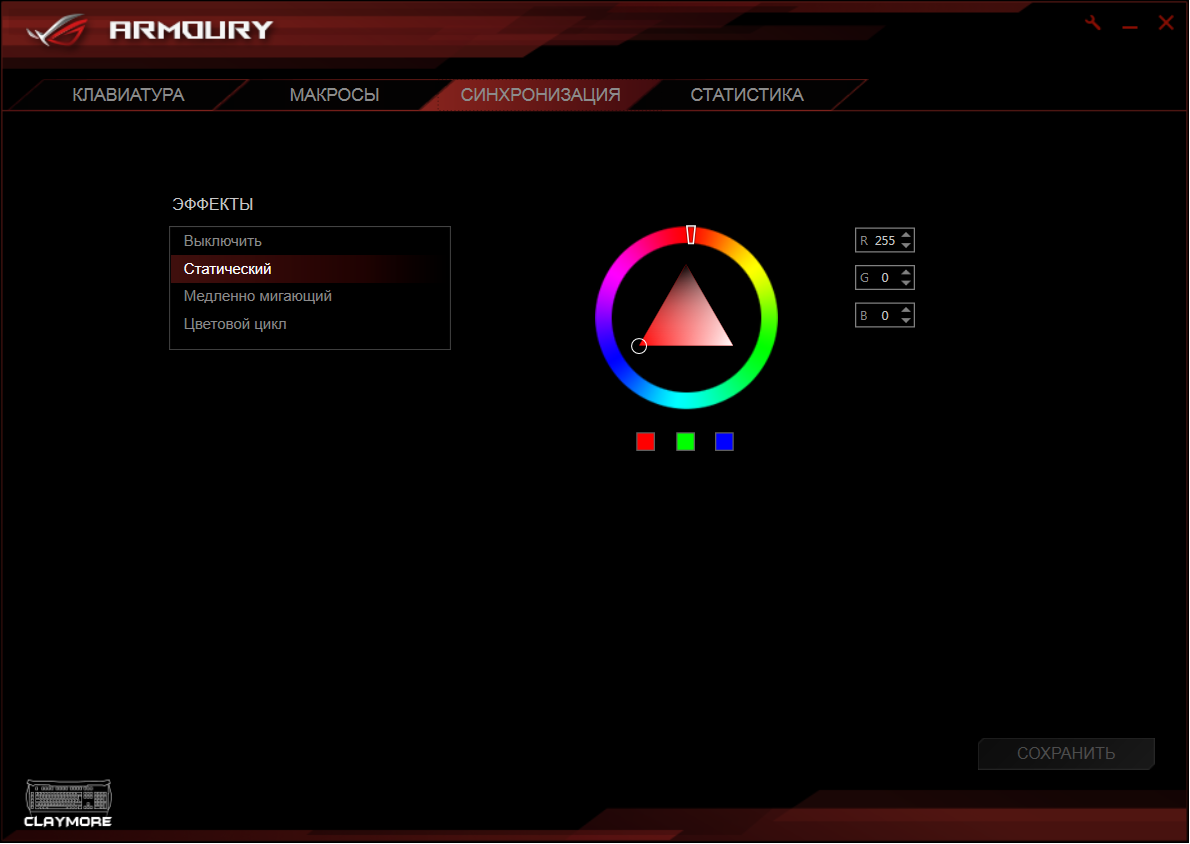 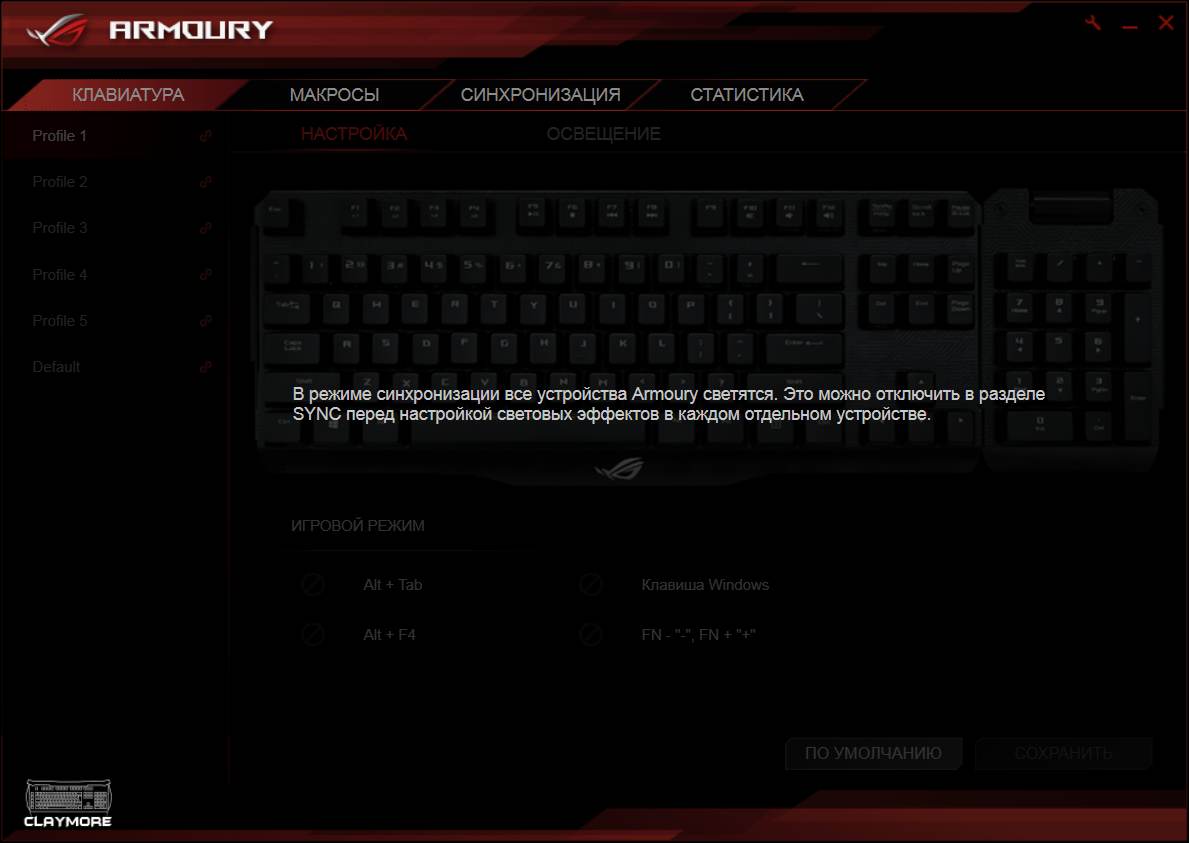 The keyboard is designed to synchronize the backlight with other ASUS RoG backlit devices such as motherboards, mice and video cards. This window appears only after updating the software and keyboard firmware to the current version. Moreover, when this function is enabled, the custom backlight settings will not be available for editing.

The ASUS ROG Claymore keyboard is rightfully a near-ideal choice for both experienced and novice gamers. However, it will serve any user for many years thanks to its reliability, which all ASUS products are famous for, and the high-quality components that it uses for its products.

Naturally, a good-quality thing cannot cost as much as an ordinary one. Therefore, you should not be afraid that the price of this keyboard will be 10-15 thousand rubles. (Yandex.Market gives such a range of numbers). For that kind of money, you will buy not a disposable cup, but a reliable and at the same time original keyboard, which may become the first keyboard for your descendants.