A power supply is a very important component of any PC, which, unfortunately, few people pay due attention to. When choosing such products, very many are guided exclusively by a formal characteristic – power and do not try to figure out how much this corresponds to reality, and even more so they do not try to understand seemingly small, but very important nuances, such as the output power at peak loads, noise, stability of operation with small short-term voltage drops and the like. But unstable power supplies often lead to unstable operation of the entire system as a whole, which can lead to very disastrous consequences. Therefore, this seemingly simple product is given increased attention to quality by manufacturing companies.

The Chieftec GPS-650C model presented in this article with a declared power of 650 W is a further continuation of the well-known “Smart” series, which is designed primarily for installation in classic home personal computers and, due to its high quality, has won recognition among both users and assemblers PC. This new update is primarily due to the fact that all the models included in it not only fully comply with the ATX 2.3 standard, but are also made with overheating protection, secondly, they received a certificate of compliance with the 80PLUS Gold standard, and thirdly, received ATI certificates Crossfire and Nvidia SLI.

80 PLUS certification (as part of the 2007 Energy Star 4.0 standard for energy efficiency) assumes that the computer power supply meets certain standards for energy efficiency: the PSU must be at least 80% efficiency at 20, 50 and 100% load relative to the nominal power of the PSU, and the power factor must be 0.9 or higher at 100% load. The normative minimum efficiency of power supplies according to the 80PLUS standard is presented in the table:

Thus, the new model of the power supply unit can be attributed to the “strong mid-range”, and it is suitable for installation both in an office PC and in a home gaming computer. Let’s take a closer look at the hero of our review. 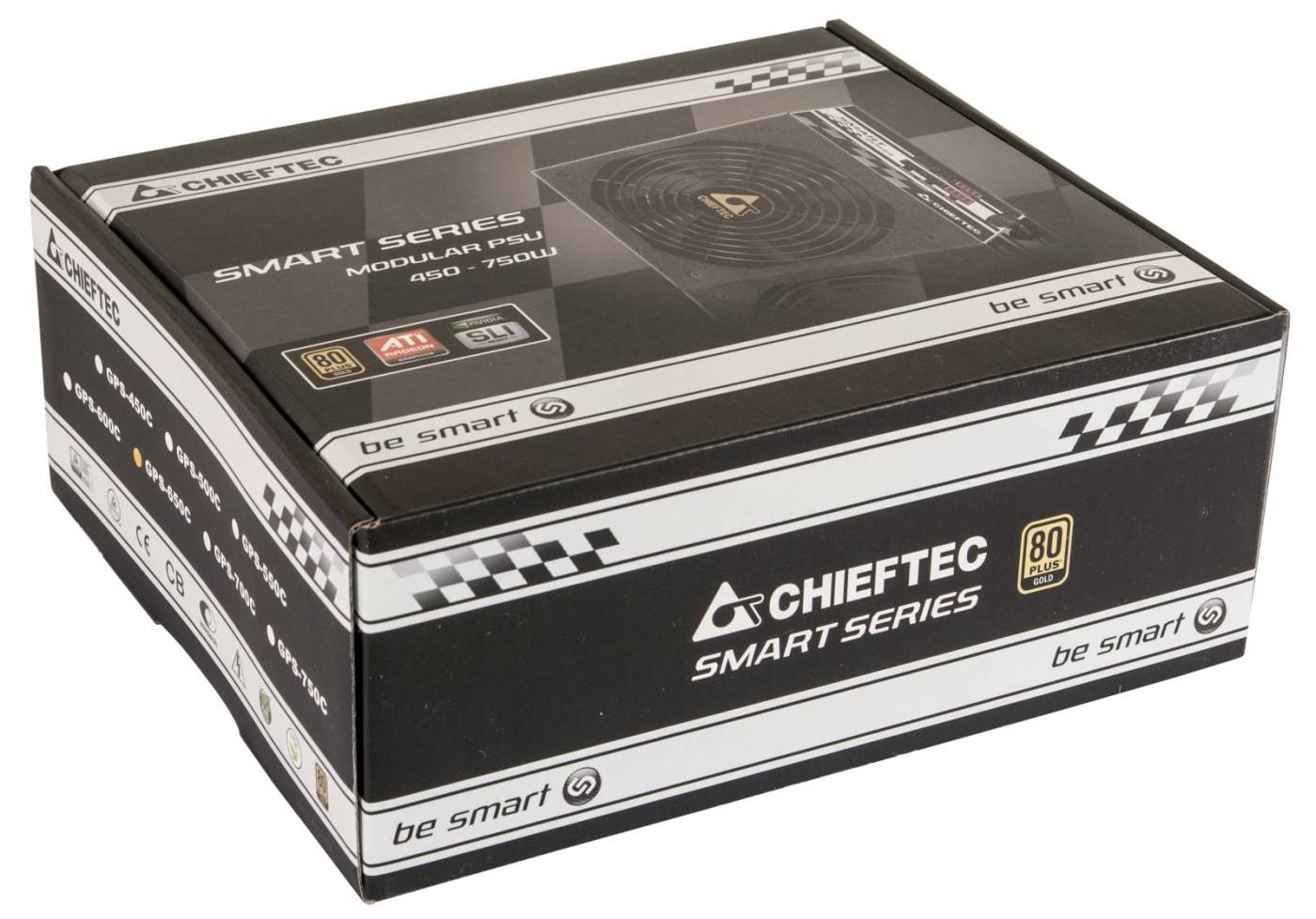 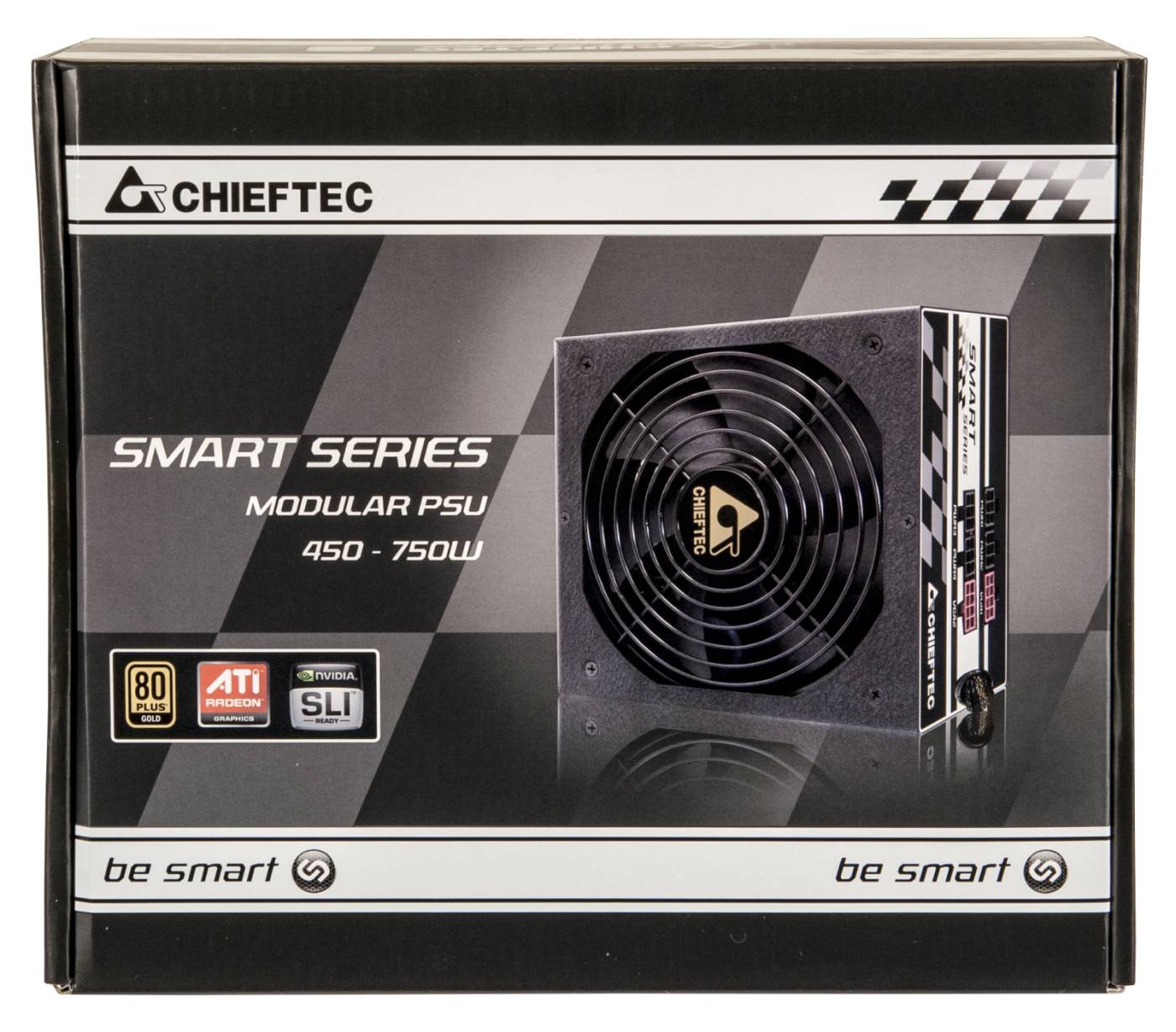 The Chieftec GPS-650C PSU comes in a simple but pretty black and white box that is designed for all Smart Series products, as all products in this series are 80PLUS Gold, ATI Crossfire and Nvidia SLI certified. Therefore, on the front (as well as on the back) side it says: “450-750W”. In addition, the buyer should be interested in the inscription: “modular psu”, which means that this power supply is modular. This means that some or all of the cables are detachable. The advantage of this solution is that it allows you to abandon unnecessary power cables, which occupy space, not only worsen the internal appearance, but often hinder good air exchange, that is, they allow, albeit slightly, but to reduce the operating temperature of the internal components of the computer. 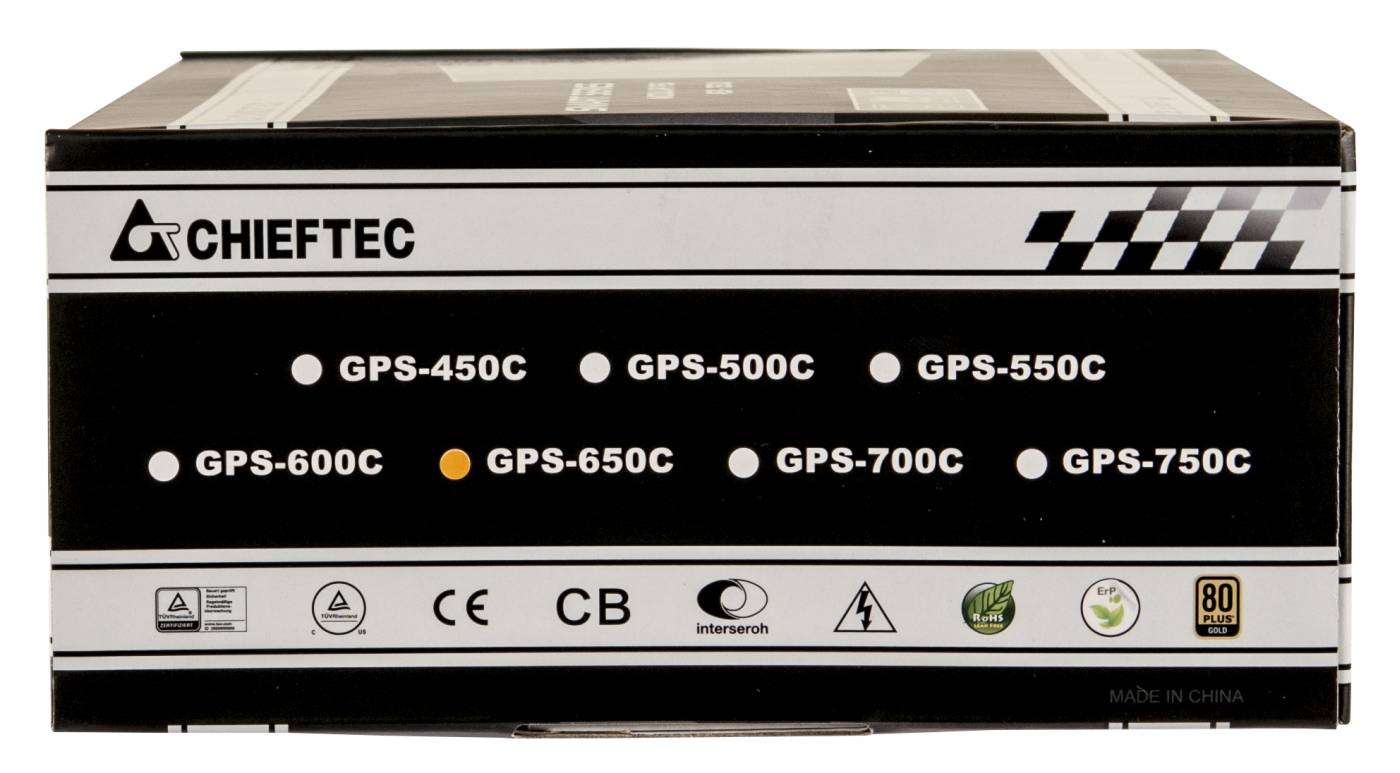 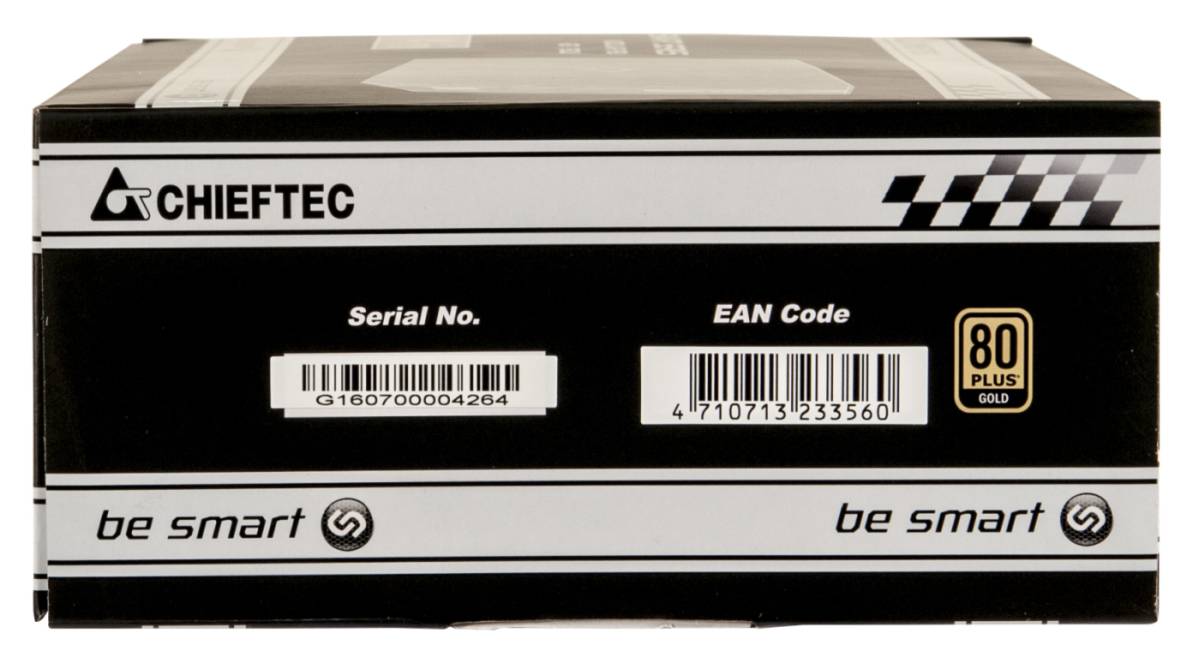 All the necessary information for identifying the device is given on the sides of the packaging. One of them shows which model is inside, and the other has a sticker with the serial number of the device. 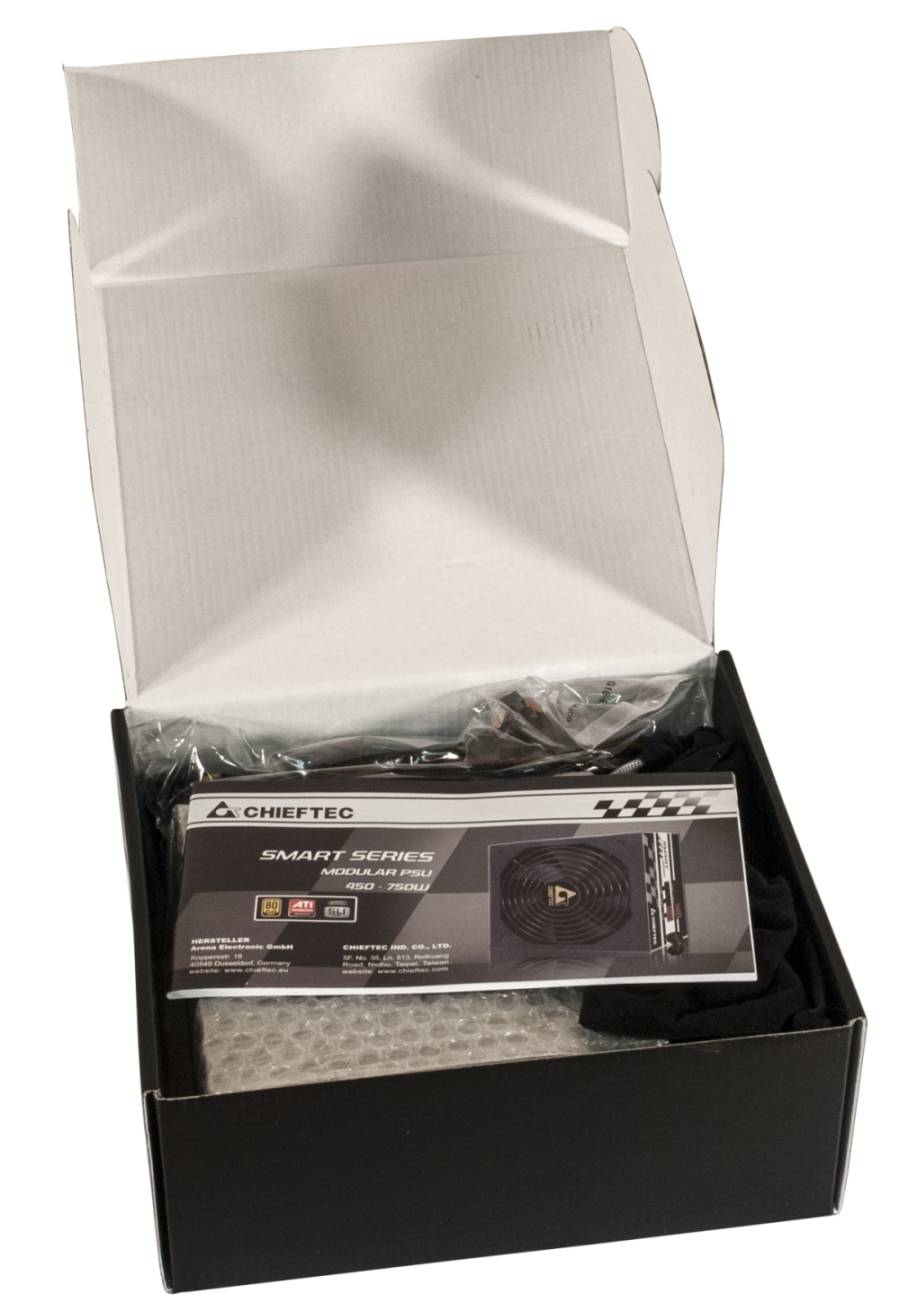 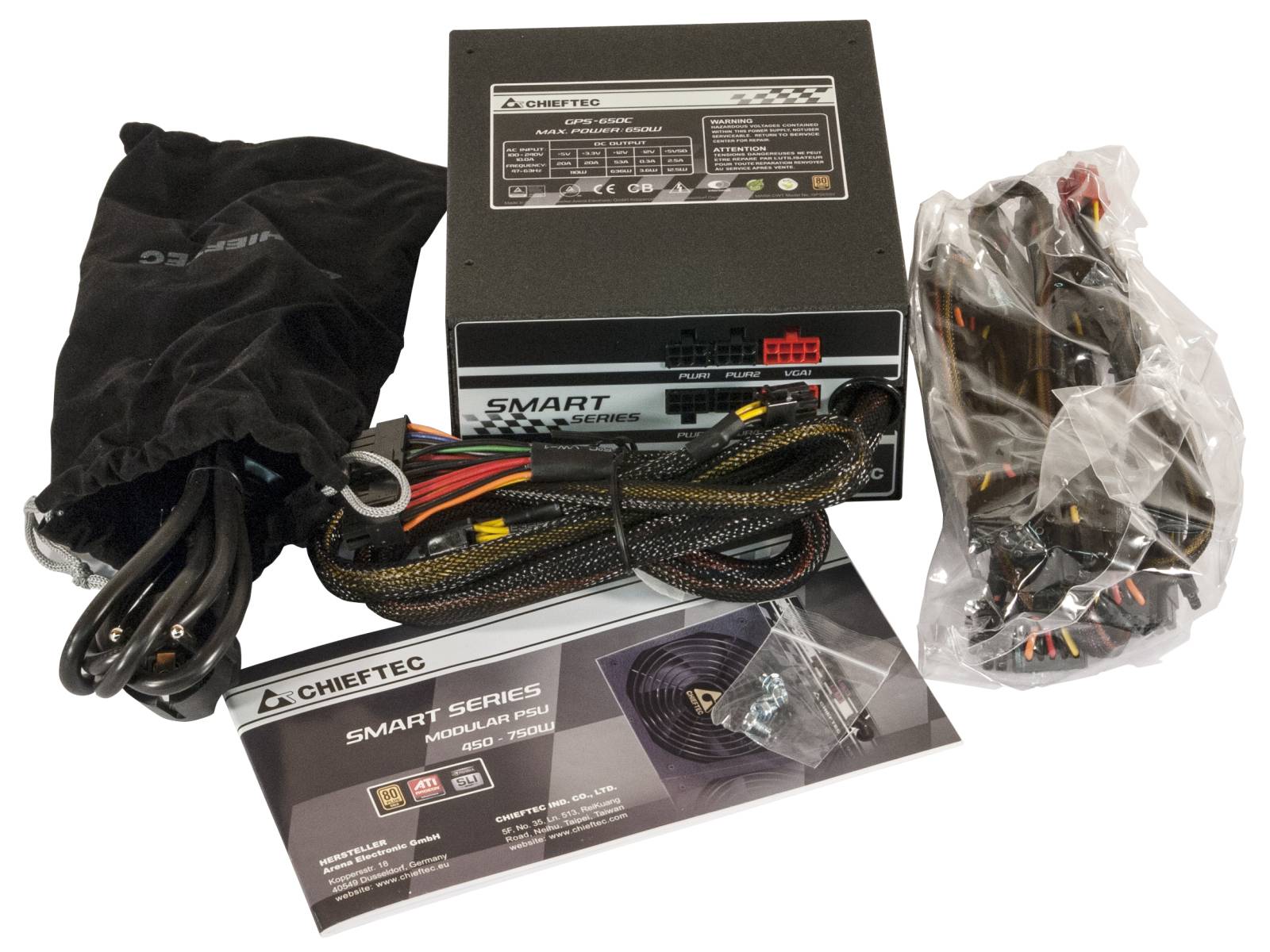 Everything is neatly packed inside the box, and nothing superfluous is attached – only the power supply itself, a power cord in a flannel bag, additional detachable cords for connecting various devices and a brief instruction in several languages. The instruction, translated into Russian, is supplemented with information about which loops are equipped with a specific model and the technical specifications of the models included in this series of power supplies. The package also includes four screws for attaching the Chieftec GPS-650C to the computer case. 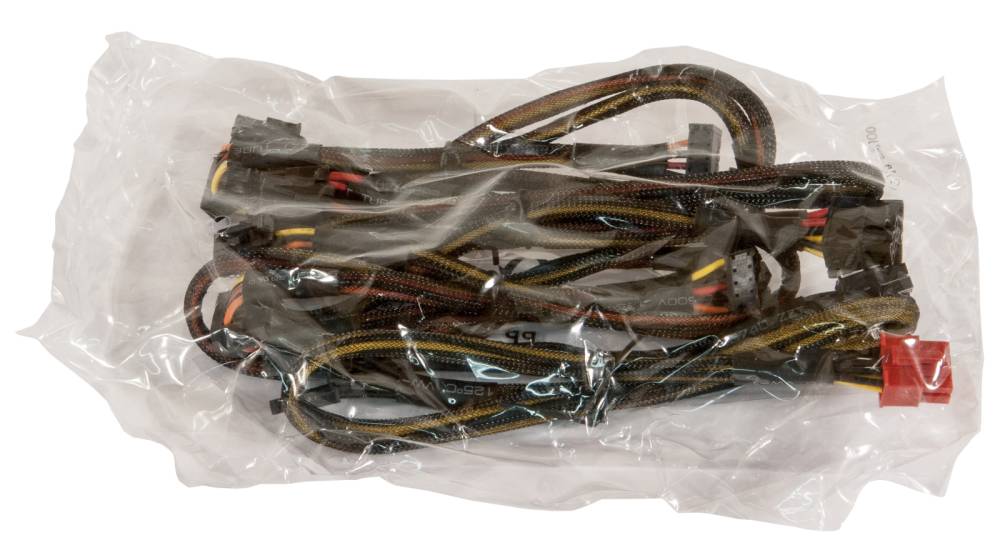 The set of fixed power cables for the Chieftec GPS-650C model, that is, those that are hard soldered to the unit board, include: one (20 + 4) -pin ATX for powering the motherboard, one 8 (4 + 4) -pin EPS for additional CPU power supply and 4-pin ATX. Attached as detachable cables are: 2 SATA cables with three connectors on each, a Molex cable with three connectors and a PCI-E cable with two (6 + 2) -pin connectors designed for connecting video cards. Such a set with a margin will be enough for all devices that can be in an ordinary home computer.

Unit dimensions – 160 × 150 × 87 mm, with a weight of about 1.5 kg. The power supply is made of stamped sheet metal and covered with a black hammer finish, which is pleasant to the touch and to the eye. 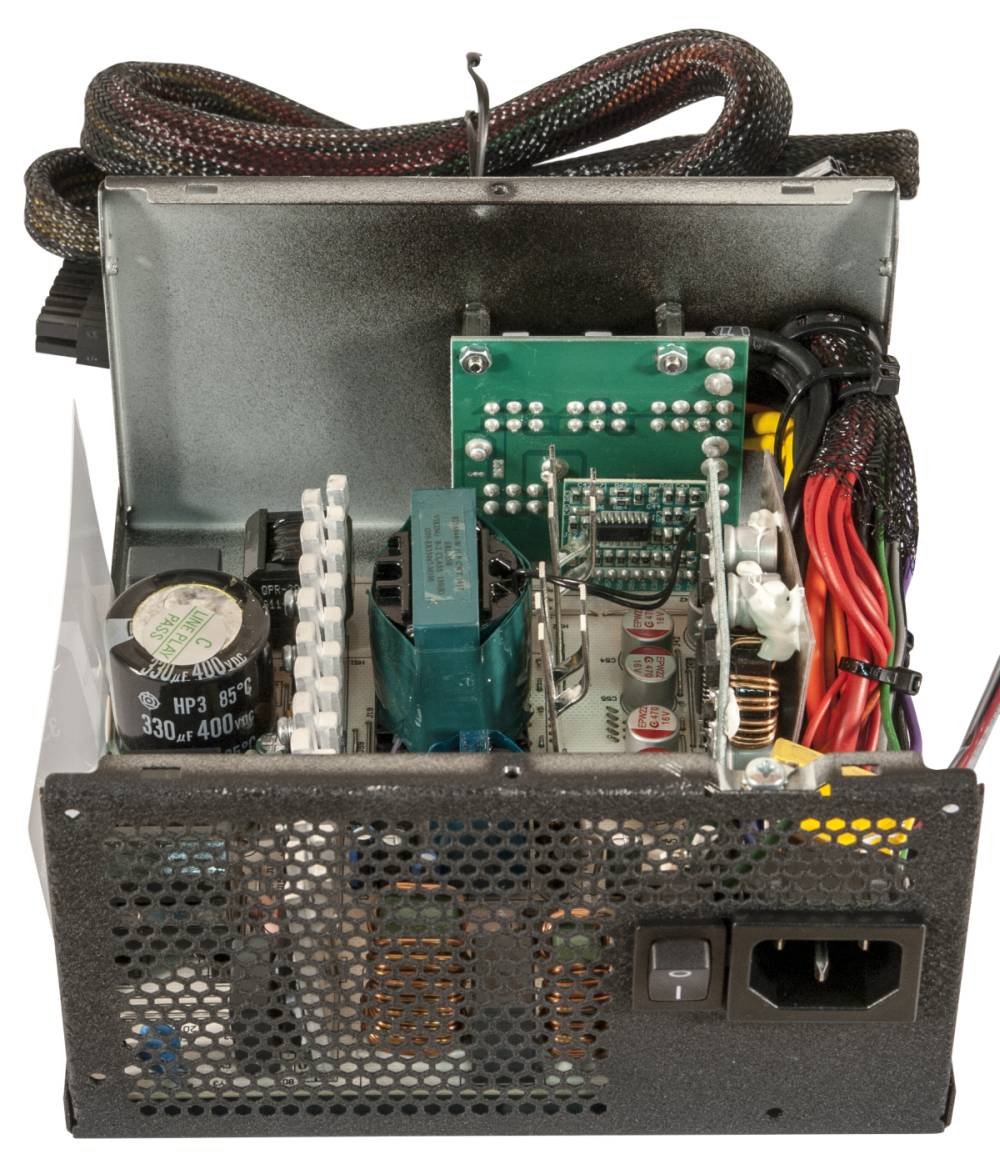 The front panel of the power supply contains a socket for a standard power cable and a two-position switch. The rest of the area is occupied by a honeycomb-shaped lattice surface, which serves to remove air and, to some extent, reduces the noise of the cooler. 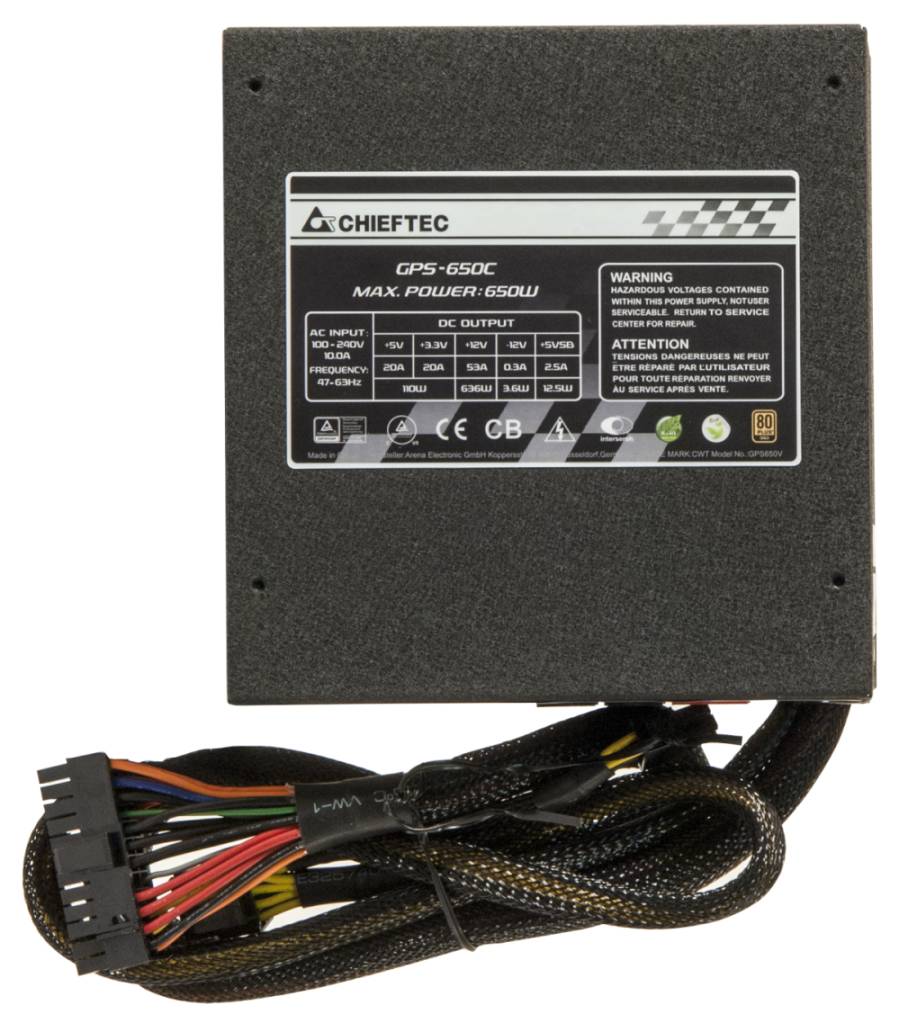 A sticker is applied to the top cover, where the technical parameters of the power supply are indicated, namely, the maximum current along the line: 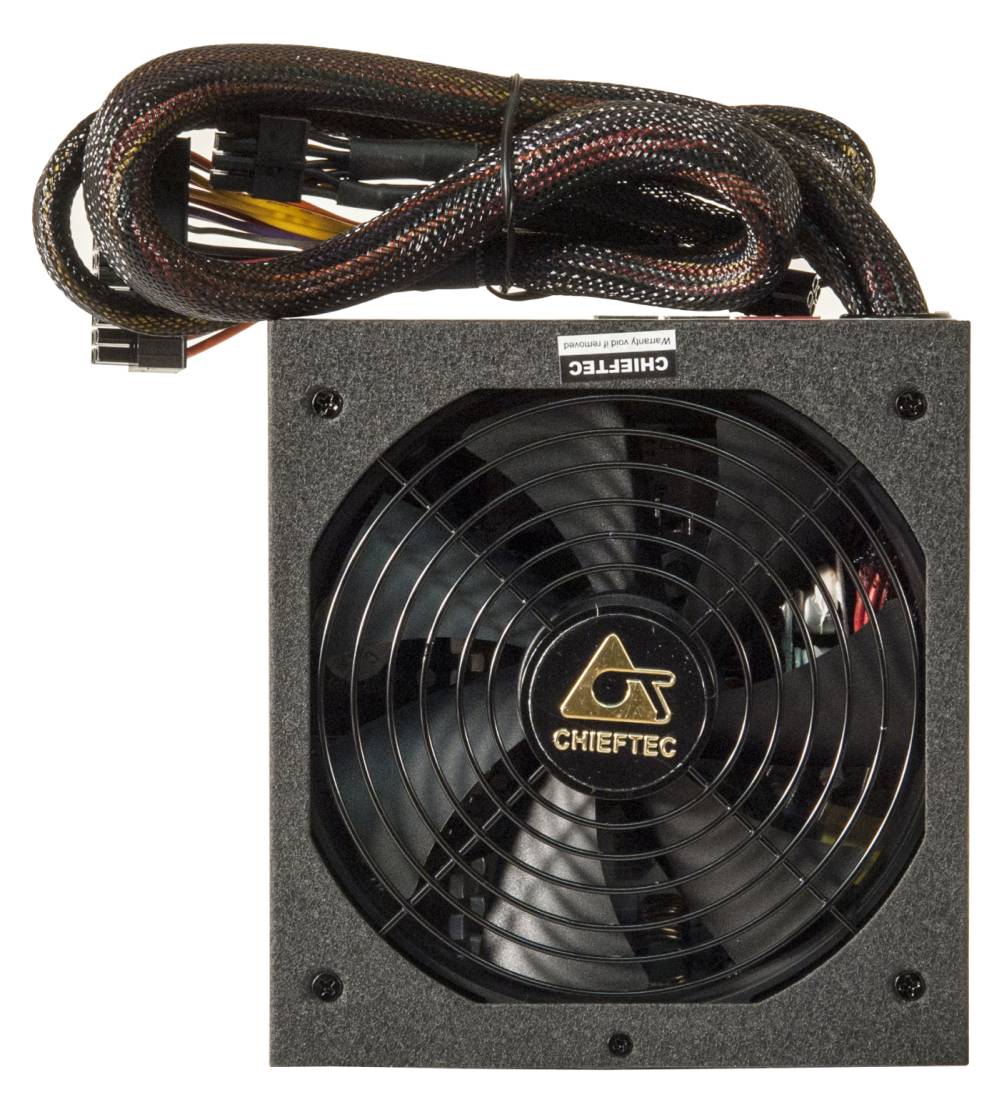 Traditionally, the entire lower part of the case is occupied by a 140-mm fan, which is the main cooling device for the entire power supply. The mount of this seven-blade model is made internal, and therefore, to clean it, if necessary, you will have to disassemble the entire power supply unit, unless, of course, you can blow it out using a powerful vacuum cleaner. 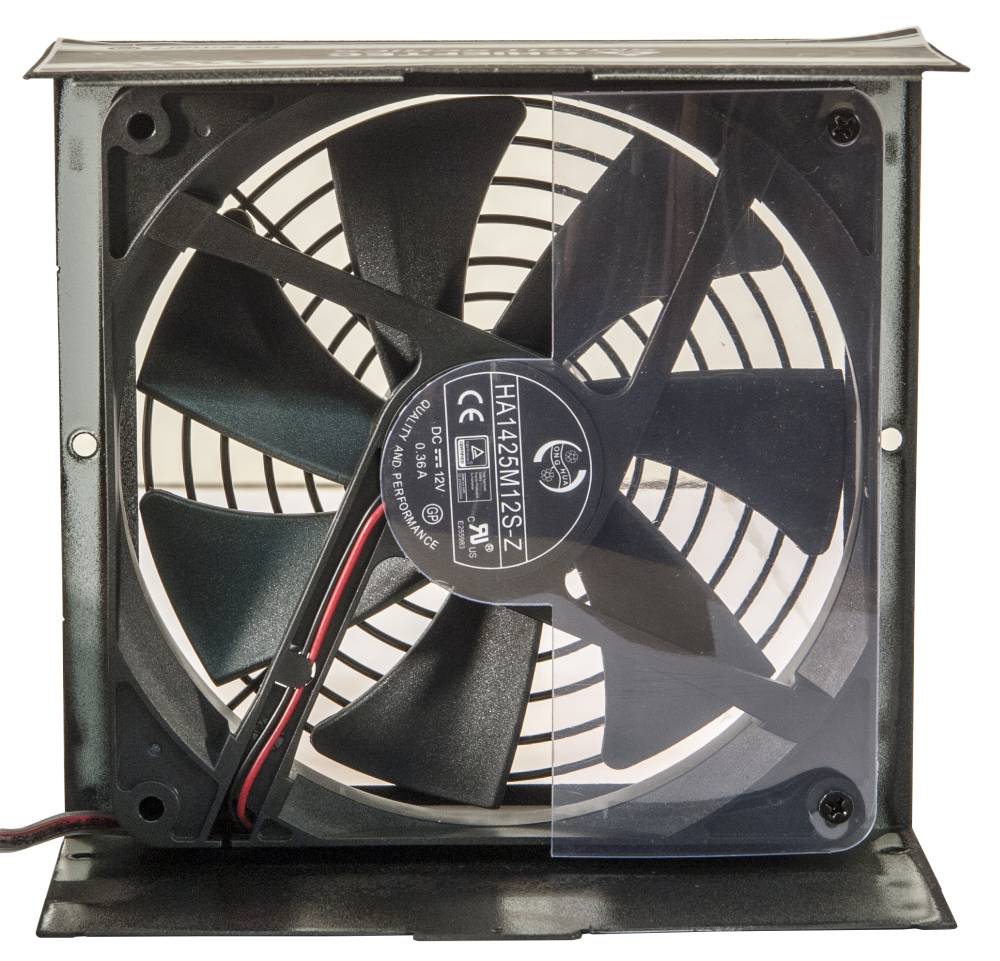 For this series of power supplies, large 140mm fans manufactured by the Chinese company Dongguan Honghua Electronic Technology (model index H1225M12S-Z) with a nominal speed of 2000 rpm were used, which automatically adjusts depending on the internal temperature. This is a good solution, since with an increase in the diameter (all other things being equal), the volume of air passing through it increases, which has a positive effect on improving the temperature regime inside the power supply while significantly reducing the noise of the fan itself. 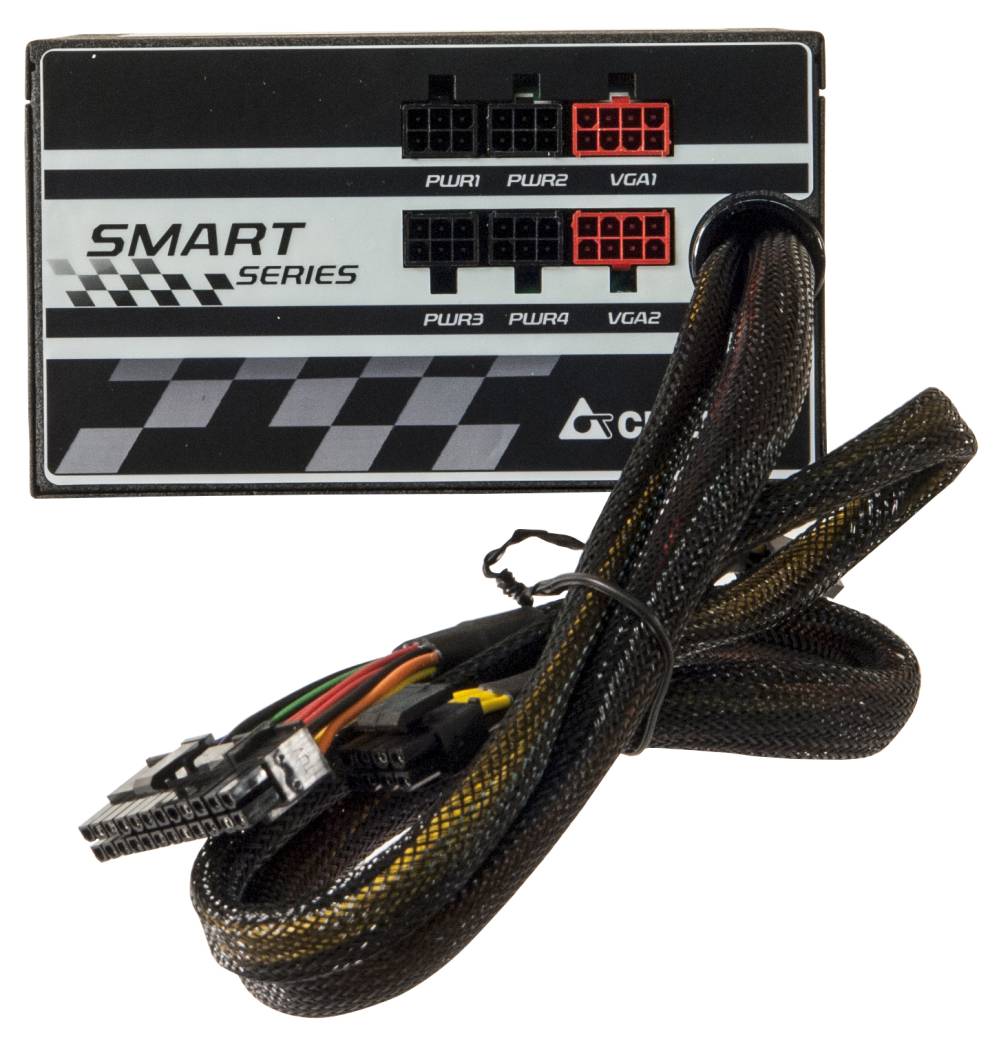 The rear panel of Chieftec GPS-650C, in addition to the hole for the exit of non-modular cables, contains six connectors for connecting detachable cables, which the user or the assembler will consider necessary to install in accordance with the devices installed in the computer. It is impossible to get confused, since all connectors are signed, and those that are intended for video cards are also highlighted in red. There are two connectors for video cards in the power supply, but only one cable is included in the package bundle. Therefore, the user will have to purchase an additional cable if necessary (a good question is where you can buy it, but in most cases they are quite standardized). 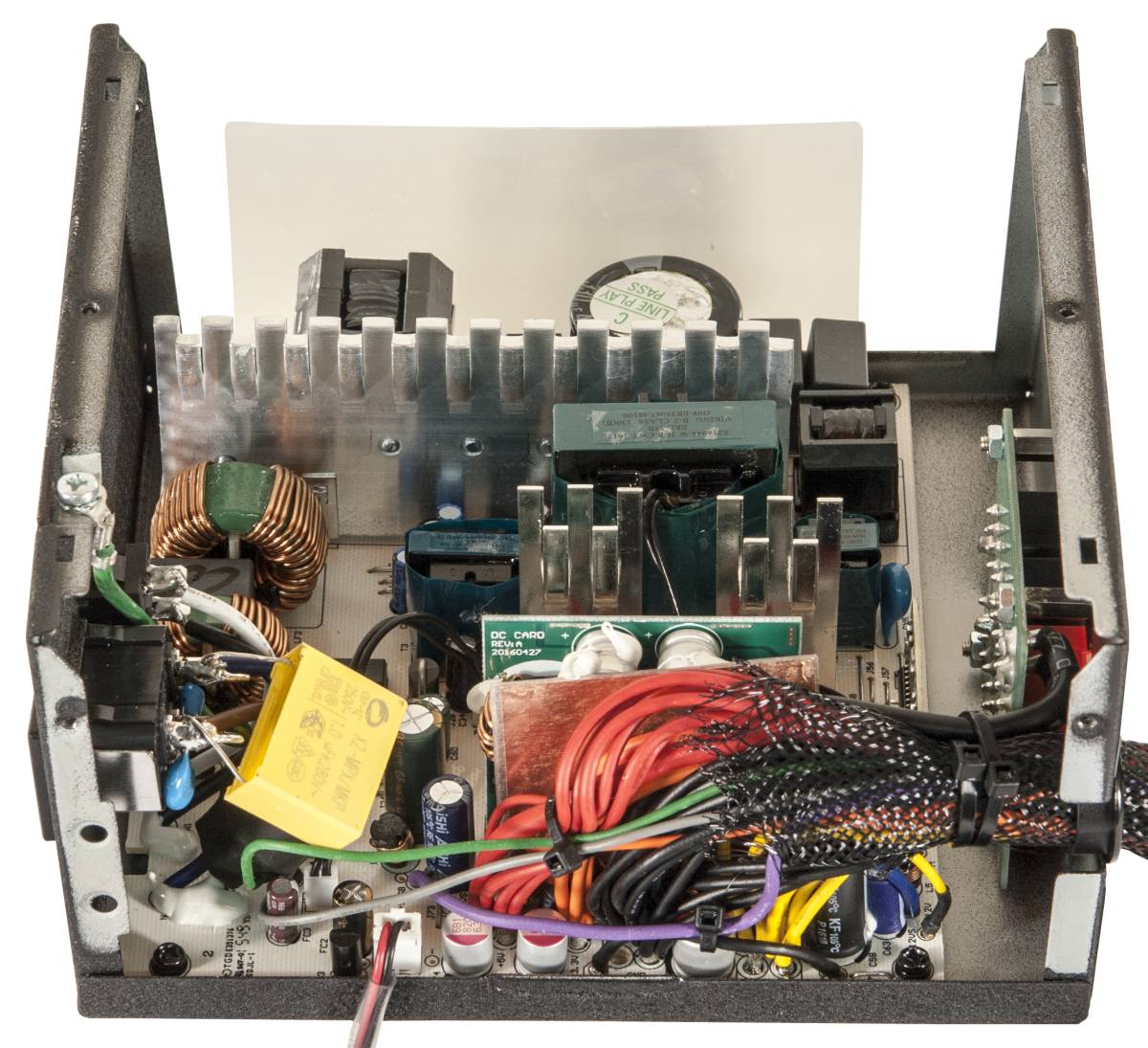 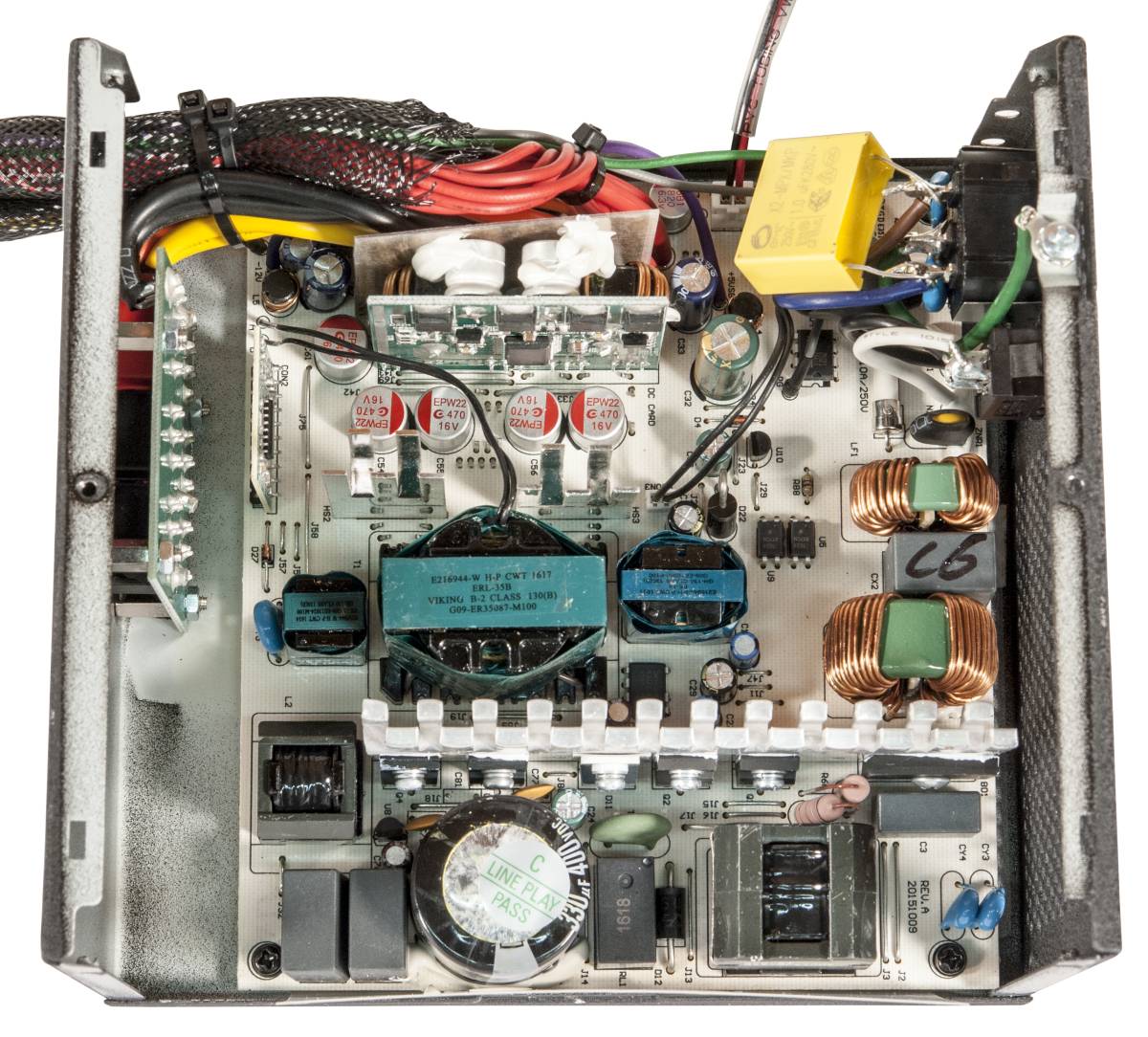 Everything inside is done very neatly. The capacitors used in the power supply are designed for a maximum temperature of 105 ° C, and this gives a certain guarantee that the device will work properly even with a slight unplanned overheating. There are not so many aluminum radiators, and they are made in a minimalist style, which, however, is not a big problem with the large cooling fan, which is installed in the Chieftec GPS-650C.

In conclusion, it should be noted that the presented power supply ensures safety:

Also, do not forget that the manufacturing company guarantees the trouble-free operation of the device for 2 years.

The Chieftec company in its new product from the “Smart” series Chieftec GPS-650C has managed to bring to life a very attractive power supply unit for the user in terms of price, features and quality. We suppose that it will be very interesting for assemblers of personal computers, that is, this model is intended for all those who are trying in our difficult time to reduce their costs as much as possible without reducing the quality of the components purchased for the computer. At the time of this writing, according to the Yandex.Market portal, it is a little over 5 thousand rubles, which is a little considering the characteristics of the product and its recognized quality.